Not when it features your favorite comics and cartoon characters. Then it can be downright entertaining.

Valiant Comics gets it. This week, they’re launching Valiant High, a four-part miniseries as part of the Comixology Originals line of exclusive digital content. (Click here for more info and to download starting 2/22.) 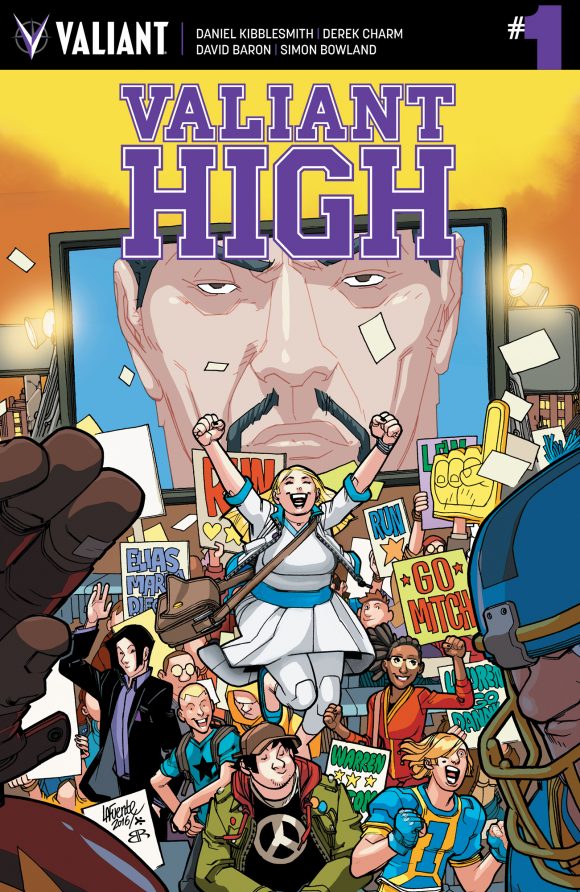 Basically, you can expect to see Valiant mainstays like Ninjak, Archer and Armstrong, Quantum and Woody, even the Eternal Warrior, as if they were just three lockers down from you. And it’s likely to be a kick too, because it’s written by Daniel Kibblesmith of The Late Show With Stephen Colbert. The line artist? Derek Charm, who knows of what he draws, what with his Jughead and Starfleet Academy work.

So with the book launching this week, we have Kibblesmith here with a look at high-school life across the spectrum of comics and cartoons in a piece we just had to call, 13 Coolest High School Universes in Comics and Cartoons:

Mary Jane (2004) and Spider-Man Loves Mary Jane (2005). While Superboy and Robin came first, Spider-Man is the granddaddy of teen angst. By the time Stan Lee and Ditko-then-Romita hit their stride, Peter Parker was on his way to becoming “Archie with superpowers.” Which is why writer Sean McKeever and artist Takeshi Miyazawa (later, others) were able to so seamlessly transform it into a manga-fied YA title focusing on Mary Jane’s high-school drama. Beautiful art, and low-stakes plots (but are they though?) driven by gossip and unspoken desires turns Spider-Man into the comic it always secretly was, and makes the protagonist a smart, hardworking girl who’s superpower is friendship. 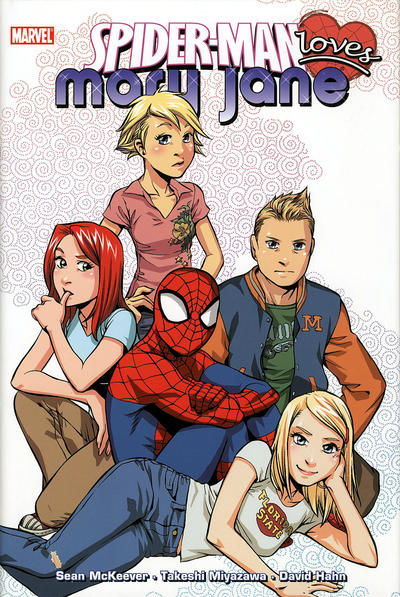 X-Men: Evolution is my alpha and omega of high school alternate universes. The X-Men were already teens when they debuted, so how do you hit the reboot button while only keeping some of them adults? Go with your gut. It’s all about power rankings: Wolverine is always old. Kitty is always young. Storm is a mentor figure, and someone you’re afraid to get angry — therefore, teacher. It can be totally arbitrary if it feels right, and bouncy teen Nightcrawler and mall-goth Rogue felt pretty perfect to me.

Muppet Babies was my first favorite show, and as far as I’m concerned, the proto High School Alternate Universe. I don’t know if it’s the first spin-off to “make everyone younger, and throw all the characters together,” but it was definitely the first one to be a big mainstream hit. Or is it the first expanded universe prequel? Either way, it set the mold: Start with personalities. Youthify them. Throw them in a big soup. Watch them bounce off each other. They may not’ve been teens, but c’mon: “When your room looks kinda weird, and you wish that you weren’t there?” That could be a Morrissey lyric. 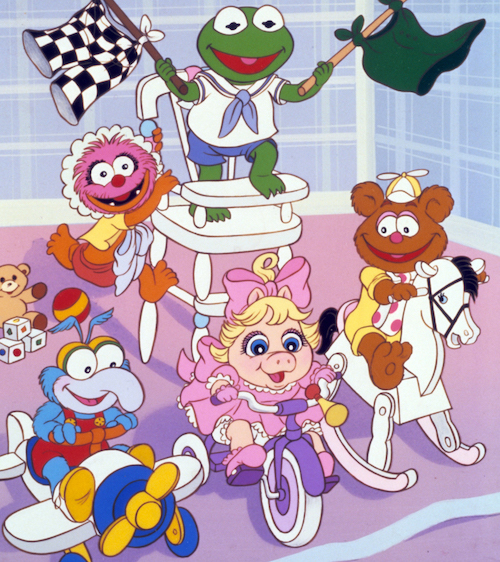 Rick and Morty. I would love to do a cross-over between Valiant High and the prime Valiant U. If only because sometimes, you just gotta go to a parallel universe to look yourself in the eyes and find out who you really are. And if you’re Rick and Morty, sometimes that “you” tries to kill you, and you have to explode it. Fun fact: This is the show that is currently playing in the background while you read this.

Clone High. Before they were comedy’s Presidents of Business, Phil Lord and Christopher Miller took the High School Alternate Universe concept to it’s next logical level: Actual people. By mapping the high school archetypes onto real historical figures, they explored (or subverted) expectation. By making it hilarious, they got a cult-hit animated series on MTV. By making it TOO hilarious, they got it cancelled. Whatever happened to those guys? 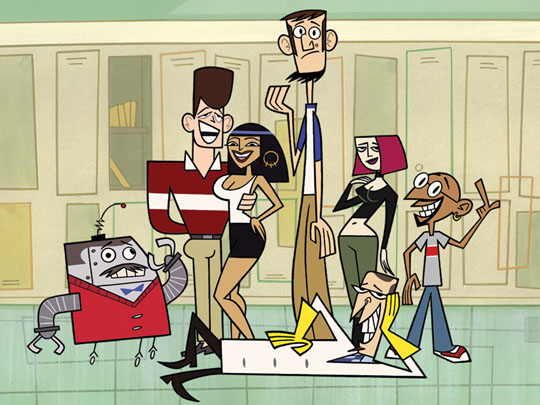 Tiny Toon Adventures. Look, it’s no Muppet Babies. But it came out of Spielberg’s head in some way that I’m not entirely clear on, and gave the world the partnership of future Batman: The Animates Series creators Bruce Timm and Paul Dini. Though technically featuring younger relatives and analogs of the Looney Tunes characters, Tiny Toon Adventures most definitely throws them into a school environment, complete with homework, unrequited crushes and a creepy After School Special episode where they split a beer three ways and die, which is exactly how it works after you turn 30.

Archie: The Best of Dan DeCarlo. I didn’t read Archie growing up, but I still knew all of the characters’ names, personalities and relationships. That’s how thoroughly it permeates a broader popular culture. It’s like if Mickey Mouse was a whole damn town. My friend, cartoonist Tom McHenry, was the one who told me to start my Archie Odyssey with the (I now understand) legendary Dan DeCarlo, who developed what would become their definitive house style, as well as creating much of the supporting cast. Most importantly, Archie is held together by comics’ best and most enduring love triangle, a staple of teen drama. Especially impressive since most comics love triangles make no sense to me — Scott, Logan, and Jean are like a Rock, Paper, Scissors of people who make no sense together. But I say this as a Jughead who married a Veronica. 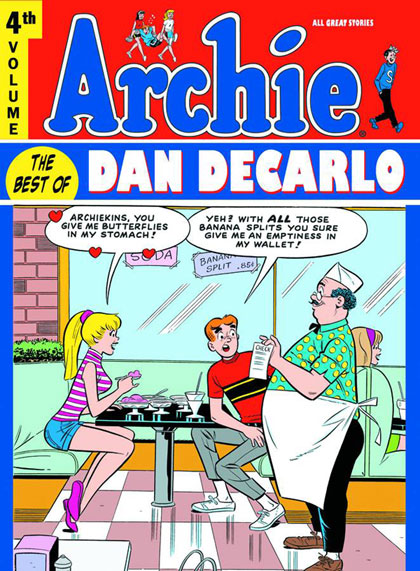 Sky High. Have you seen Sky High? Why aren’t we all talking about Sky High all of the time? In 2005, Disney made an original-concept teen superhero high-school movie that creates a fleshed-out universe almost as fully realized as the previous year’s The Incredibles. All the high-school archetypes work perfectly, dividing the high-school social strata into would-be superheroes and sidekicks. Also, beat this cast: Bruce Campbell (gym coach), Dave Foley (insecure sidekick instructor), future Flash co-star Danielle Panabaker, and Principal Lynda Carter — who makes a fantastically awkward and mandatory Wonder Woman joke at, if I recall, the last possible second. Oh, and of course, Disney’s most beloved live-action child star, Kurt Russell. Even now, I ask, “Who was this movie for?” knowing full well the answer was “Me.” 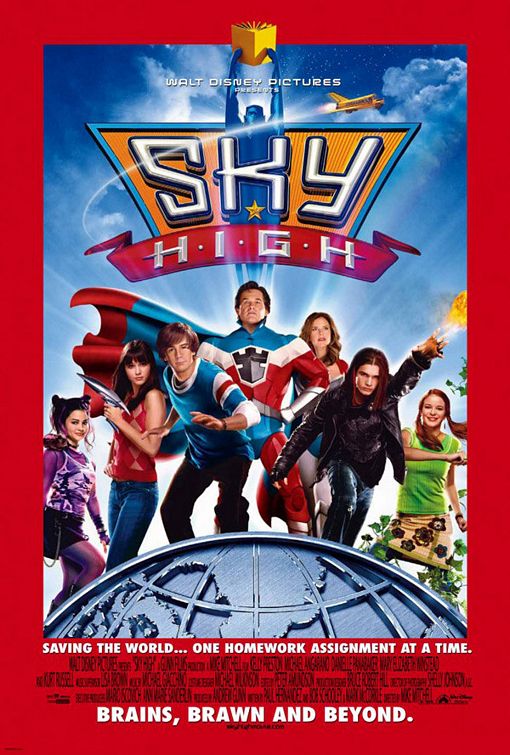 Young Justice. Even though I loved the Justice League animated shows, I didn’t believe people when they said this show was good, and now no one believes me when I say it’s great. I used to leave it playing on Netflix at work, with the sound muted, to boost their ratings, and help them get an upcoming revival. Therefore, I take full credit for the recently announced third season and would like to cameo as the voice of Rainbow Raider, please. If you haven’t seen this, me trying to explain it will have the opposite effect, so just go get sucked in. 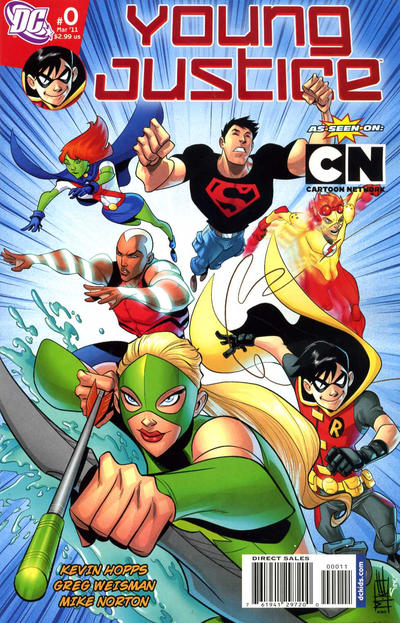 Batman Beyond. Speaking of, “I can’t believe this was good.” Not alternate, but future. Not Robin, but a teenaged Batman. Even typing it now, I think “That can’t be right.” I couldn’t have been more of a cynical baby geek when they introduced the idea of a new, young Batman-with-attitude in a cyberpunk future. I was a huge idiot. Creating Terry McGinnis and his gallery of surprisingly memorable rogues (Is Paul Dini the best at making new Batman villains that actually stick?) was another crucial step on the path to creating the beloved DC Animated U. 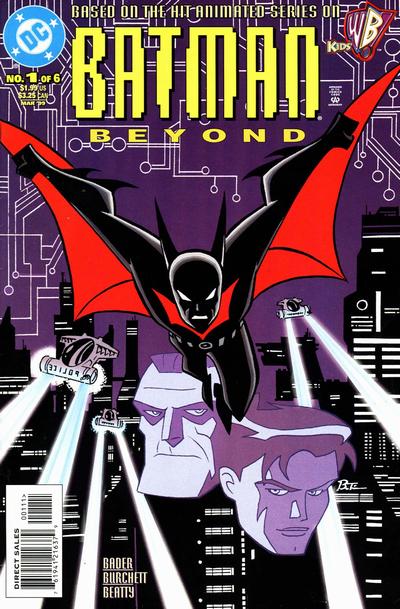 Rugrats: All Grown Up! Just kidding. These are monsters. This show was on for five years.

Star Trek: Starfleet Academy. In a pop-culture landscape of prequels and reboots, all designed to make familiar franchises younger, sexier and more explosiony, how has there never been a Starfleet Academy TV show? Luckily, Valiant High artist Derek Charm gave me Volume I of IDW’s Starfleet Academy (drawn by Charm and written by Mike Johnson and Ryan Parrott), and I love it. I grew up with ’90s Star Trek, some TOS re-runs, but never broached the expanded universe, even though my friend gave me the novel with Kelsey Grammer’s face on the cover. But Starfleet Academy is everything you’d want from a jumping-on point, with a new cast of young characters, participating in a Triwizard Tournament-esque Starfleet competition. I’d love to see it as an animated pilot. 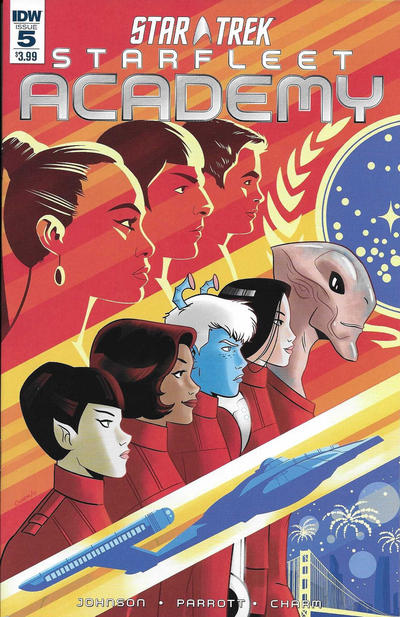 Sliders invented the concept of parallel universes in fiction. Period. It did. Don’t go look it up. Sliders was the first one. If it wasn’t the first one, then why did I tape it on VHS every Friday night? A whole show about seeing what you would be like under slightly different circumstances. Until it became (I think?) a show about a war with space cavemen. Ah, the late ’90s. Sliders is available on Netflix. Valiant High is available from Comixology.com. 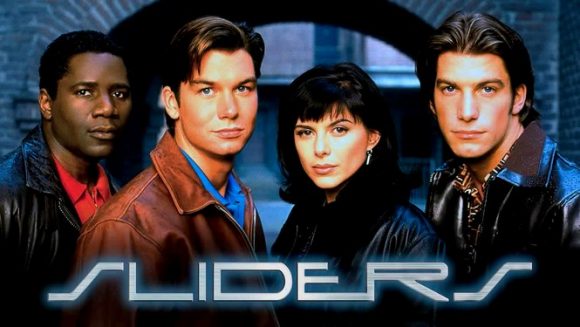