THE HAND: When Michael Caine Met Barry Windsor-Smith – Sort Of

The Hand is a 1981 horror film directed by Oliver Stone(!) starring Michael Caine (in what he himself described as “a money job”) as a writer/artist who produces a very successful adventure newspaper strip called Mandro, a Prince Valiant/Conan hybrid. Over the opening credits, we see Jon Lansdale (Caine) hard at work on the newest installment.

Jon is married to Anne (Andrea Marcovicci), and they have a young daughter, but it doesn’t take long to see that they’re not happy. Anne wants to move to New York and get into some New Age-y stuff but Jon is content to stay in Vermont where his work, as he puts it, “pays the bills.” Indeed it does—Jon’s strip must have circulation equivalent to Peanuts or Doonesbury, given the size of the lakefront property that he and his family live on. 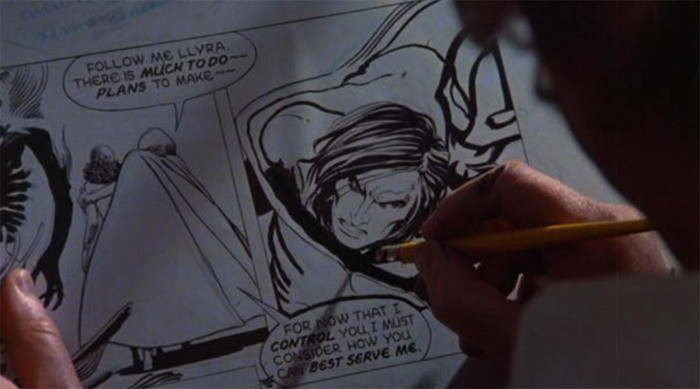 While on a drive, a fight breaks out when Anne reveals that when—not if—she goes to New York, she’s not all that interested in having Jon come with her. Jon starts to yell and Anne, rattled by Jon’s fury and an impatient driver behind them, veers off into the opposite lane. Unfortunately, she does this just as a garbage truck is coming the other way! She tries to swerve, and mostly does, except Jon’s outstretched hand gets smashed by the truck, shooting blood in every direction!

As you might imagine, this doesn’t make things better between them. Even worse, Jon has lost his drawing hand, which leads to his agent suggesting he partner up with another artist to continue Mandro. Jon goes to New York to meet the guy (played by Roger Rabbit himself, Charles Fleischer), but, in the midst of a deep depression, he’s so rude that the whole arrangement collapses and the agent fires him off his own strip.

Right around this time, we see that Jon’s right hand, last seen in a field, has come alive and has started to move around on its own. It finds its way to New York (boy, that must have taken a while) where it kills a homeless man (played by Stone). Jon’s career in comic strips is over, so he takes a teaching gig in California where he starts a relationship with one of his students, all the while having visions of inanimate objects coming alive. Is this really happening? Has The Hand come alive and started killing people? Or is this all in Jon’s mind? 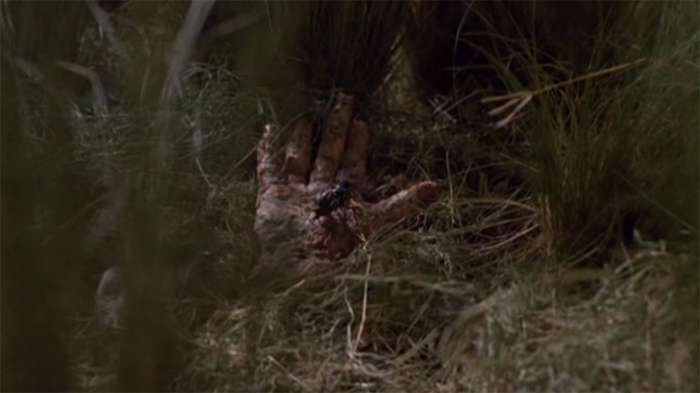 As the movie crawls along, The Hand seems to suggest one answer to this question, then another, then flips back again. When two dead bodies are found in the trunk of Jon’s car, he is arrested and committed. The final scene shows Jon being examined by a mad scientist-ish doctor played by Viveca Lindfors (seen the next year as Aunt Bedelia in Creepshow), ending with him commanding the hand to strangle her, and it’s here the movie seems to confirm all of this really did happen. It’s a fun, ghoulish scene, but tonally so different than what has come before it feels like the kind of blood-and-guts ending that was tacked on after a bad test screening. I have never been able to confirm this was the case, but the way The Hand ends you can picture a whole series of straight-to-video sequels: The Hand 2: The Fingering, etc.

Michael Caine’s performance is trashy fun. He seems like an extremely angry guy right from the get-go (he is an artist, after all), and he gets to do a lot of the patented Michael Caine Stuttering Angry Thing, where you can almost feel the walls of the set shake from the sheer volume. He also lets himself look scrungier and scrungier as the movie plods along; by the end, with his hair shooting in all directions, he reminded me of Gene Wilder in Young Frankenstein. 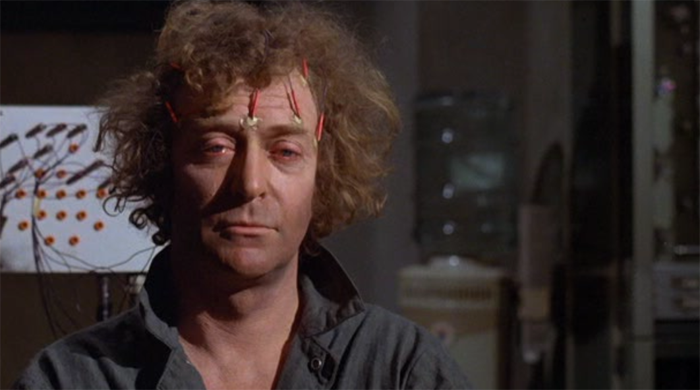 Overall, I’d say The Hand makes for a mildly OK psychological thriller, but at some point it was decided to ramp it up into more of a straight-ahead horror movie and that’s when all the silliness kicks in. Oliver Stone realized someone being strangled by a dismembered hand looks pretty goofy, so he keeps the lighting dark, allowing us only little glimpses of the people as they fight for their lives against The Hand. Stone, of course, would move onto more prestigious projects, while Caine would face other horrible movie monsters in his film career, like Jaws, killer bees and Steven Seagal.

Unfortunately, The Hand never got any sort of comic book adaptation, even though one can picture it perhaps being done by Warren Publishing or another company that regularly engaged in horror. No, the reason we’re discussing it for REEL RETRO CINEMA is because the Mandro comic strip was drawn by none other than the legendary Barry Windsor-Smith!

Here’s Oliver Stone talking about how Smith got involved: “I’d always been a fan of his. I think I fell in love with his version of Conan before I had even read the Howard books. He did more for that comic than anyone… Since the cartoonist was drawing a Conan-type character, Barry was the logical choice. Oddly enough, Barry was English, as was Michael, and they both have sandy blond hair. When they first met, they discovered that they’re both about 6′ 2″, and that they both have the same sort of East End wit. The similarity was quite amazing.” 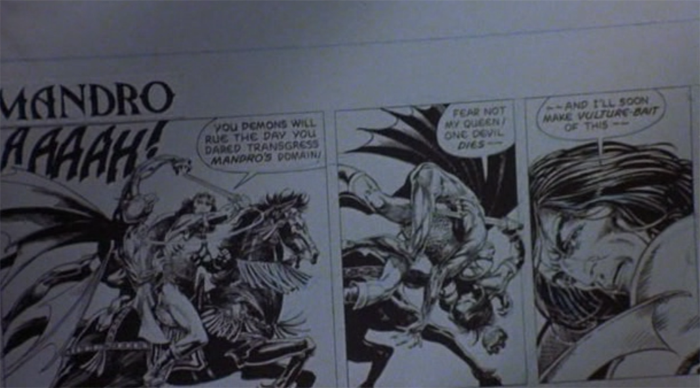 We get some big close-ups of Mandro as it’s being worked on, and for those familiar with the art form it’s kind of hard to imagine Windsor-Smith’s beautiful, detailed, intricate work as a daily black-and-white comic strip, where it of course would be printed at the size of a postage stamp (not to mention how Jon could ever stay on deadline doing this kind of stuff). Still, it’s beautiful work, of course, and I distinctly remember seeing The Hand on cable as a kid and being totally enthralled that a comic-book artist whose work I recognized was in a movie!

While Windsor-Smith made some nice money from The Hand, he came away from the whole process feeling negative about trying to move from comics to film, as he explained to Gary Groth in The Comics Journal: “The reason why I wanted to get back into comics was in fact because of The Hand. Because, like so many comic book artists, I’ve always had this desire to be a moviemaker — because it’s a whole lot bleeding easier than writing and drawing comic books — and being out there in Hollywood with Oliver [Stone] and the whole damn thing, I was thinking, ‘Christ, this is even more bleeding cutthroat than Marvel Comics!’ And I didn’t think that could happen! [Laughter] So, total disillusionment for me.” 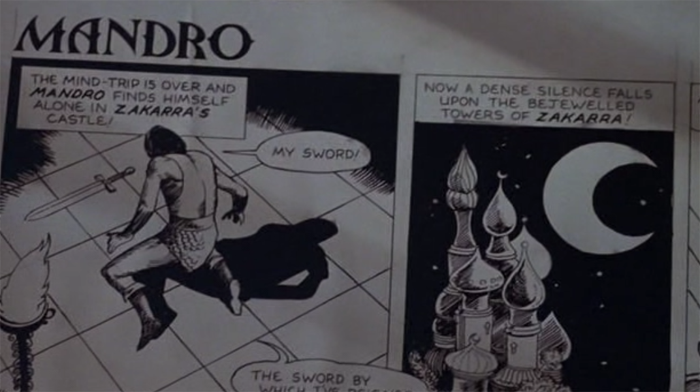 It doesn’t seem like anyone came away from The Hand feeling particularly rewarded, except for Caine, whose agent undoubtedly cashed the check the same day it arrived in the mail. While Oliver Stone has proved to be a top-flight director, as a horror film The Hand isn’t particularly scary nor does it work much as a character study because Jon is pretty unlikeable, despite being played by the enormously charming Caine.

By the time the credits rolled, I was more concerned with how well readers liked Mandro under its new creative direction. Did the fans give it a thumbs up, or the finger? 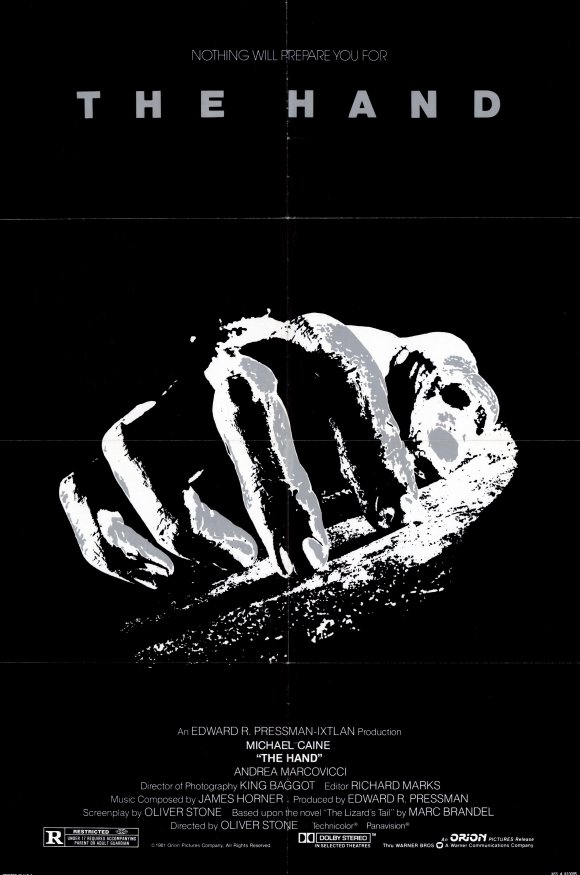