65 YEARS: Celebrating THE FLASH’s Anniversary — and the Birth of the SILVER AGE

Home » COMICS HISTORY » 65 YEARS: Celebrating THE FLASH’s Anniversary — and the Birth of the SILVER AGE

I got into comic-book collecting when the collecting was good, when history was being made practically weekly on the newsstand and back issues were still available for reasonable prices, even taking inflation into account.

It must have been around 1970 or 1971, when I was working diligently to complete my collection of Showcase, one of my all-time favorite — and probably the most important — comic book titles of the Silver Age. Running for 93 (often) glorious issues from March-April 1956 to September 1970, it was ground zero for the revitalization of the comic book superhero, beginning with Issue #4 — the revamping and re-introduction of the Flash. 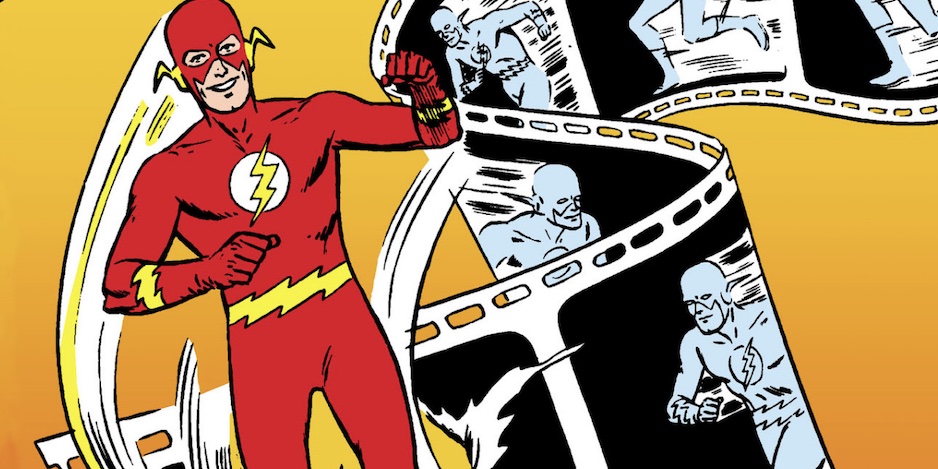 Showcase #4 (pub date Sept./Oct. 1956) was, and remains, one of the key key issues of the era, and copies were not easily obtained, even then. But in a rare act of fraternal benevolence, my older brother Alan, who was then working in DC’s production department and was a frequent visitor at Neal Adams’ Continuity Associates, mentioned that artist Jack Abel had a copy of Showcase #4 laying around on his drawing board forever. Should he ask if Jack would sell it?

Long story short, Alan asked, Jack would, and with $10 borrowed from my mother, I became the proud owner of a beautiful, near mint copy of the first appearance of the Silver Age Flash. (No, I don’t still have it. It fell victim to my starving artist years, circa 1980, when I sold it to comics dealer Larry Charet in Chicago for $900, at a time when my rent was $145 a month. Que será, será!)

I would complete my Showcase collection within a year or two, once I began attending comic book conventions, starting with Phil Seuling’s 1971 New York Comic Art Convention. A few years later, I was writing the revived Showcase — #94-#96, introducing the New Doom Patrol with Joe Staton in 1977, and the epic Showcase #100 (May 1978), featuring just about every character who ever appeared in the previous 99 issues, co-written with Paul Levitz and art again by Staton, and hey, DC… how come this still hasn’t ever been reprinted?). Fifteen years after that, I threatened DC reprint editor Bob Kahan with literal bodily harm if he assigned the introduction to the trade paperback collection, The Essential Showcase: 1956-1959 to anyone but me.

1. That Cover. It took me a couple years to figure out what was being symbolized by the Flash bursting from a frame of unspooling movie film. At 10 or 11, I thought it meant he was a character being adapted from an actual movie. By the time I had my bar mitzvah, I understood it was a demonstration of Flash’s speed, that he could outrun even light being projected at 24 frames per second. 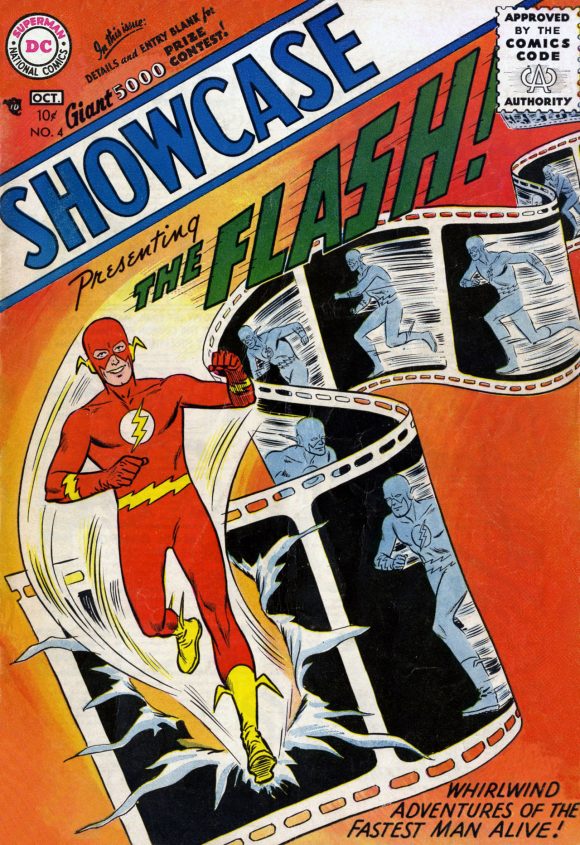 2. The Birth of an Era. After years of superhero comics being the exception rather than the rule on newsstands, Showcase #4’s debut of the Silver Age Flash marked a turning point. That reboot would lead to Julie’s revitalization of Green Lantern, the Atom, Hawkman, and others – including the introduction of the Justice League of America and, well… you know the rest. 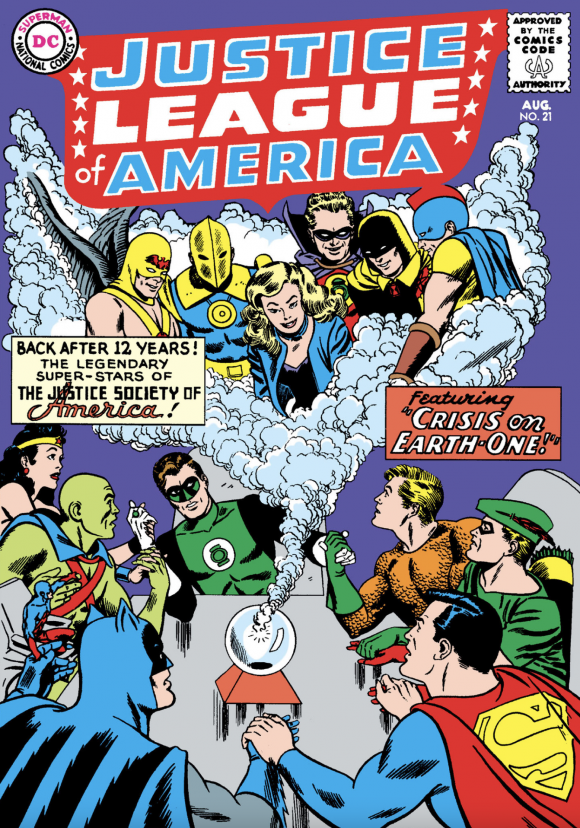 (Yes, I know J’onn J’onzz, the Martian Manhunter, was technically the first new superhero of the Silver Age — debuting in Detective Comics #225 (Nov. 1955), predating Flash by about a year — but the character never made much of a splash as a back-up feature and I don’t think he ever even appeared solo on a comic book cover until his feature was moved to House of Mystery #143 (June 1964). But I digress.)

3. The Flash. Not everyone was thrilled with the super resurrection. In a 1990 interview I conducted with Carmine Infantino, he reported his response to editor Julie Schwartz’s announcement that superheroes were coming back as being, “Oh, Christ, not those again!” (That interview, as well as one with Schwartz describing the editorial meeting when the idea was first floated appear in my Direct Comments: Comic Book Creators In Their Own Words, available at Amazon.com. But after a total of four Showcase tryouts, Flash was given his own title, picking up the Golden Age numbering and relaunching with #105 (March 1959). Superheroes were here to stay. 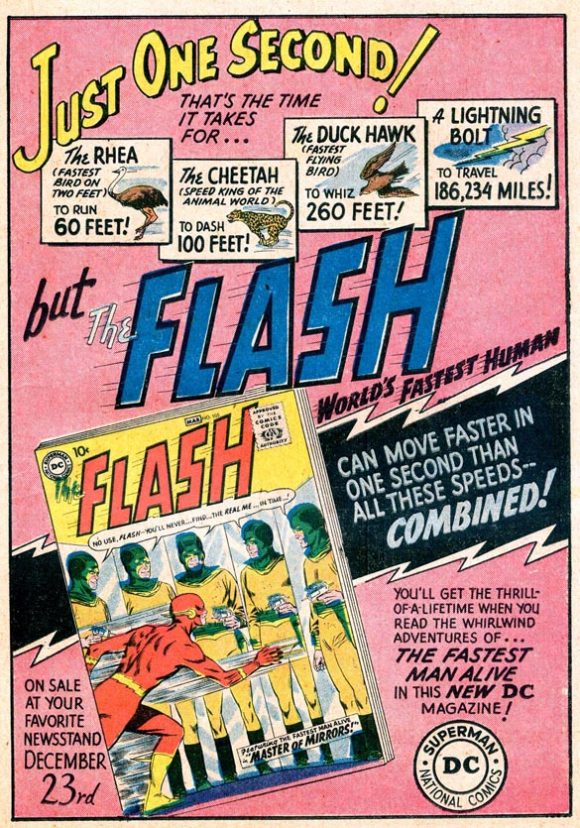 4. Joe Kubert Inks Carmine Infantino. What more do I have to say? 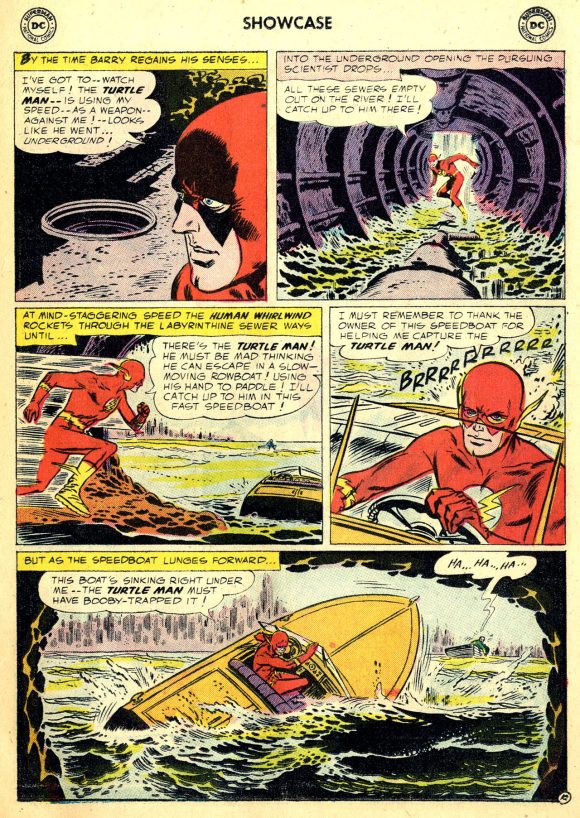 5. Laid the Foundation for the Multiverse. It’s right there, in the last panel of Page 2 of “The Mystery of the Human Thunderbolt”: Barry Allen reading the Golden Age Flash Comics #13 (although the real Flash Comics #13 had Hawkman on the cover) and chuckling over “just a character some writer made up.” Talk to me again after “The Flash of Two Worlds” in The Flash #121 (June 1961) Mr. Know-it-All-Police-Scientist! 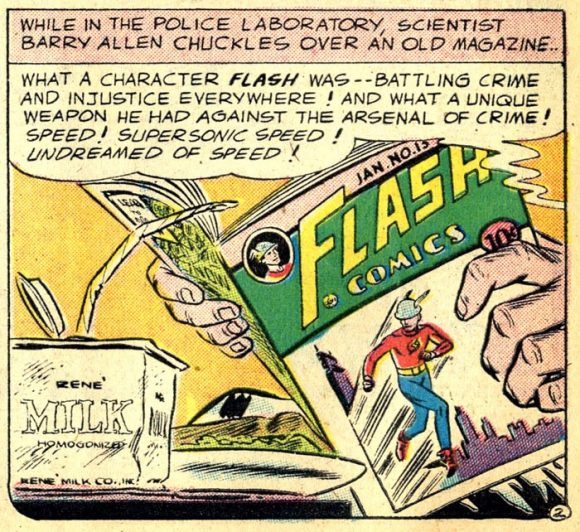 6. Screw You, Sam Raimi. As much as I liked the first Spider-Man movie, it will be forever marred by director Sam Raimi’s inter-company theft of Barry Allen catching a tray of falling food at super-speed. Shame on you, Sam! These three panels from the Flash’s origin story are as iconic and tied to Barry’s story as Martha Wayne’s string of pearls is to Batman’s. (Note: Barry’s mother’s name was not also Martha.) 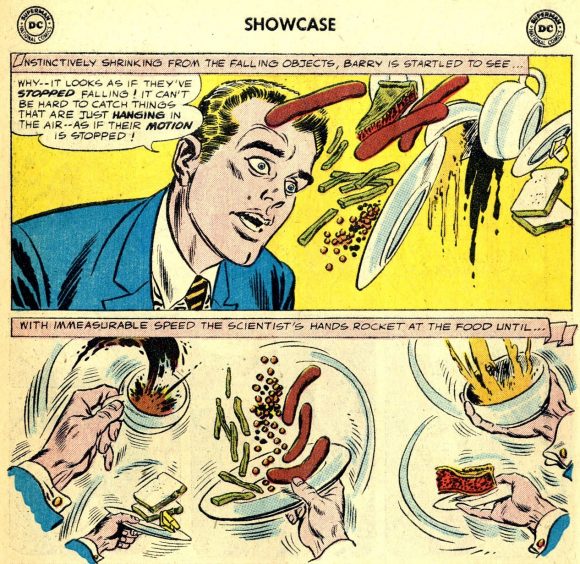 7. Three-Panel Turbocharge. Speaking of the catching-the-food moment, that was done as one of writer Bob Kanigher’s famous three-panel progressions, i.e., a triptych of images that shows the rapid progression of an action. Other writers used this schtick (I got it from Len Wein and David Michelinie, who got it from Bob), but Kanigher was the master of this bit of business, and it served him well writing about the Fastest Man Alive. There are no less than six uses of three-panel progressions in the 12-page “Mystery of the Human Thunderbolt” and another one in the 10-page secondary story, “The Man Who Broke the Time Barrier.”

8. Blinded Us With Science. Julie Schwartz was a gimmick editor. He liked stories that revolved around some tricky bit of business based on fact, the more obscure the better. He kept in his office a small collection of books on science and nature that he would thumb through for inspiration and ideas while plotting with his writers.

He was still using those same books and pamphlets when I started writing for him in the early 1980s, many protected by brown paper book jackets he cut out of supermarket grocery bags. (I rescued that set of books from the trash when Julie was clearing out his DC office post-retirement in the 1990s; I kept them in my own office until I left DC in 2006, at which time I turned them, and a bunch of other rescued Schwartziana, over to the company library.) 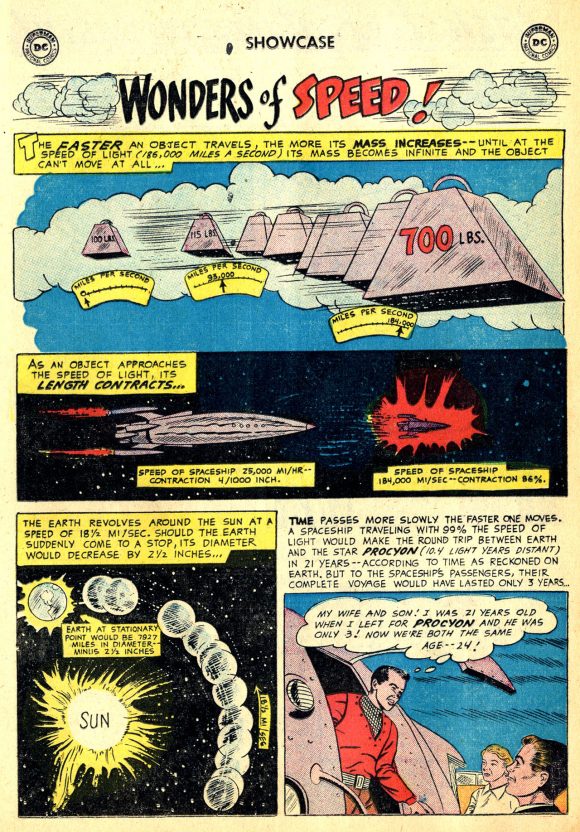 Julie also filled his extra pages with science and fact. Showcase #4 features three fact-filled feature pages, all speed-related: the self-explanatory “Fastest Creatures on Earth,” “The Wonders of Speed,” about the effects of near-light speeds on mass and time, and “100 Yard Dash,” a text page chronicling the history of the foot race.

Heck, even the issue’s back cover is an advertisement for Nutty Putty, “a new scientific toy… made of the wonder material your parents have read about in Life, Time, and other magazines.” 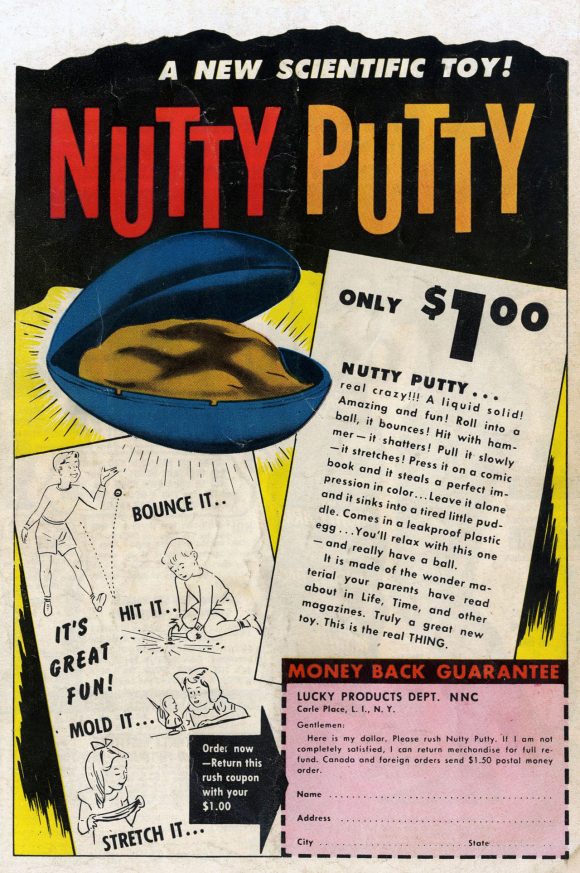 9. “Barry, You’re Always Late!” Kanigher came up with a great piece of character business for Barry Allen: In his secret identity, the Fastest Man Alive was a slowpoke, always late for his dates with girlfriend, reporter Iris West. And Iris was a typical superhero alter ego’s girlfriend of the time: snarky and borderline verbally abusive, an evidently necessary ingredient in that era’s gal pals. I suppose it was to inject some irony into the situation: The heroes may possess powers and abilities far beyond those of mortal men, but dang it, they’re still henpecked by their “girlfriends” (which, considering how chaste those relationships were, I’ve long felt were mother substitutes to the 8- to 13-year-olds who were the primary consumers of comics back then). 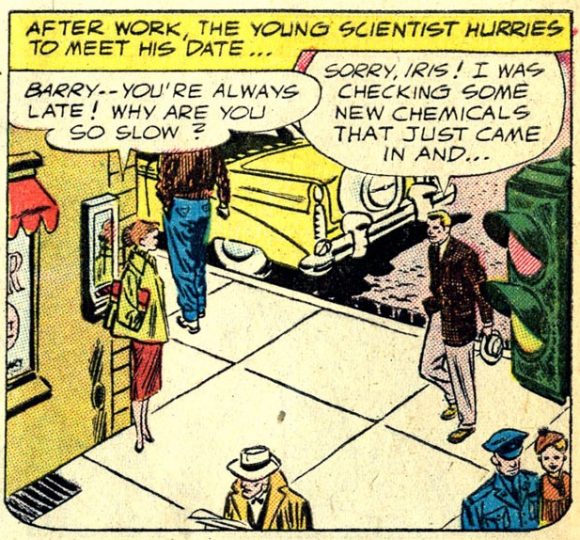 10. The Slowest Man on Earth. The Flash versus Turtle Man, the Slowest Man on Earth, who used slow, deliberate planning to outwit his adversary! It made perfect sense! It would be years before I learned that Turtle Man was also a reboot from the Golden Age Flash series, now reborn as a chunky guy with a receding hairline and a green turtleneck sweater. 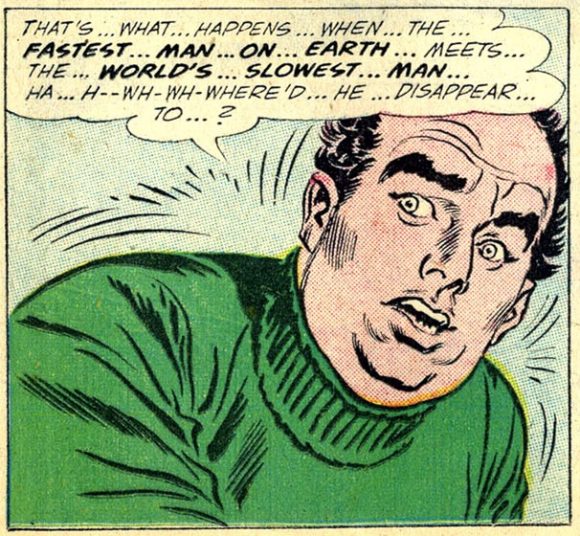 And it only just occurred to me while researching this piece that Carmine modeled the slowpoke villain after his lifelong friend and sometimes art partner, Frank Giacoia (Carmine and Frank broke into the comics business as a team in the early 1940s). You be the judge. 11. Time Travel. How fast is he? The original Jay Garrick Flash was fast by 1940s standards, but there wasn’t a whole lot of time-barrier breaking back in the olden days. Yet Barry Allen, probably unaware that it’s impossible, busted it wide open in his second adventure, “The Man Who Broke the Time Barrier,” to return a criminal from the future who was accidentally sent back to Barry’s era instead of his intended destination — a far, far future on a desolated Earth, as sentenced by the court.

13. That Self-Referential Splash! Which came first, pages 2 through 23, or Page 1? I’ve always loved this splash page, Flash bursting from the pages of his own story. It was also an image that highlighted the incredible costume by Carmine Infantino, a sleek design of blazing scarlet and jagged yellow lightning that screamed speed. DC has messed with the design over the years, but to date, no one has ever improved on it.