Saga, Image. With 75+ years of comic book legacies staking permanent claim in our cultural lexicon, it’s not easy to make you care about brand new fictional comic book characters. So, when Brian K. Vaughan took a little break from the comix grind to bolster television, his innate ability to craft instantly likable, albeit sometimes snotty, characters in clever conflicts (see: Y – The Last Man, Ex Machina, and The Runaways) was sorely missed. Then he and his collaborator/artist Fiona Staples dropped Saga into our monthly midst and reminded us of what we were missing. Not since I was a kid coming out of the first showing of “Star Wars” have I felt this energized and thrilled about the mix of magic and science and galaxy-building mythology. Plus, it’s got “mature content” so I don’t feel like too much of a dork as I enter my latter years. 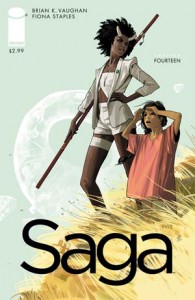 Captain America, Marvel. Joe Simon and Jack Kirby invented Captain America when America needed a superhero to punch Adolf Hitler in the chin during World War II. Later on, Stan Lee and Kirby decided to dust off the star-spangled hero in the Avengers and threw him a keen ‘man out of time’ curve ball. Then, when Kirby came back to Marvel Comics after a much-needed hiatus, he wrote and drew some of Cap’s wackiest adventures culminating with America’s 200th birthday. Since then, Cap wore the American flag with honor and got more serious and even died for a little while, like most good franchise characters tend to do. But, when Rick Remender and John Romita Jr. were challenged to update him recently, they picked up Kirby’s hyperbolic baton and went future-psychedelic sci-fi that would make Harlan Ellison wince. I’ve never seen the super soldier take that kind of beating but Steve Rogers proves, issue after issue, if there’s a will there’s a way and that’s why he’s Captain America. 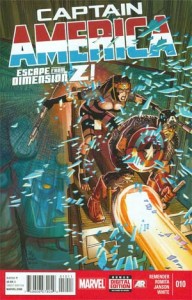 Daredevil, Marvel. Speaking of comic books that recommend the form: you get a two-for-one Marvel Comics special every month with writer Mark Waid at the helm knowing exactly how to manifest the virtues of the artists he collaborates with. When the comix world lost artist Mike Wieringo, Waid lost the Jack Kirby to his Stan Lee, the creative team responsible for my favorite Fantastic Four run since Lee/Kirby, and John Byrne. But when Waid was offered Daredevil, Marvel’s best pulp hero, and decided to launch his series with a lighter tone that would actually turn into something as dark, if not darker, than his predecessors, he found his Steve Ditko in the triple threat of artists Marcos Martin, Paolo Rivera, and Chris Samnee. If you’re not reading Daredevil, you’re not reading good comics done right.

Hawkeye, Marvel. What does the Avenger’s famous super-archer do on Thursdays? He becomes an Image Comic under the guise of a Marvel Comic as dictated by writer Matt Fraction and artists David Aja and Matt Hollingsworth. Image Comics is known for its commitment to publishing independent voices and keeping corporate mitts off other people’s original ideas. Hawkeye feels and reads like an editorially free comic where the current issue could be the last issue but sales say otherwise. And I’m glad for that because it reminds me of what corporations should do and that is to cast their books well and let the talent create good and fun stories like how they used to when I bought a lot more franchise comics.

Plus, be sure to check out these gems, too:

The Walking Dead by Robert Kirkman and Charlie Adlard (Image)

Fury: My War Gone By by Garth Ennis and Goran Parlov (Marvel)

Award-winning cartoonist Dean Haspiel is the godfather of the Brooklyn indie comix scene and is hard at work with Mark Waid on The Fox, from Red Circle Comics.

A version of this story first ran in the New York Post’s Parallel Worlds blog.