The DAN SLOTT Interviews: A Spider-Legacy

It’s the finale of The DAN SLOTT INTERVIEWS, our series of talks with the writer of Marvel’s Spider-Man on a variety of whimsically webby topics.

In PART 3, we surfed the spaceways with Silver Surfer. (Click here.)

Now, PART 4, we discuss making controversial decisions — like killing Spider-Man and Hobgoblin — and walking with giants … 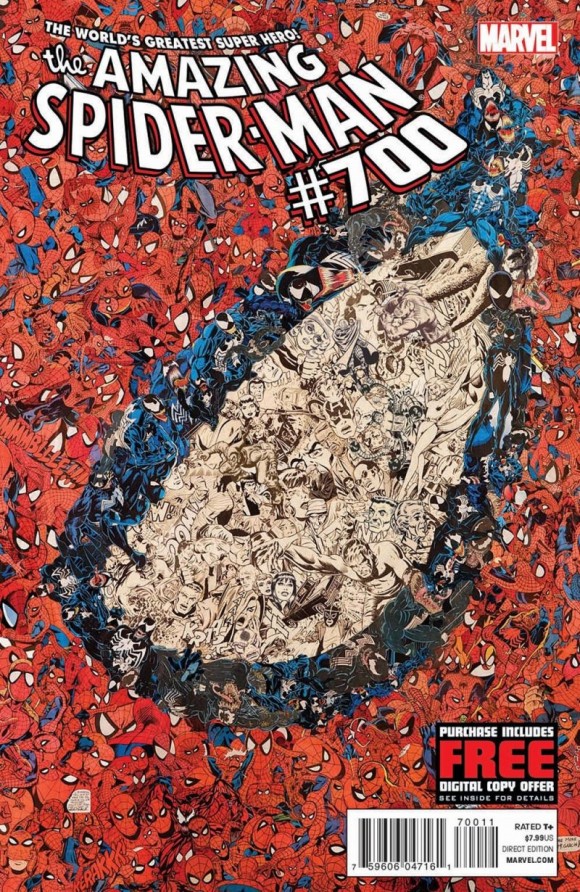 Dan Greenfield: You’re now getting to that point in your career where a lot of kids someday are gonna be looking back and they’re the ones who were reading the Dan Slott comics.

Dan Slott: And they’ll go, “Why did you DO that? Why’d you kill Spider-Man?”

Greenfield: Well, let me ask you about that. You’ve been working on Spider-Man for how many years?

Slott: My first issue came out in January 2008.

Greenfield: Yeah, so it’s been about eight years. … What goes through your mind now? You were a kid who adored Spider-Man. Six-seven years old, waiting for him outside the store. You’ve been writing him now for about eight years. You’ve seen it all! You did some pretty radical and creative and inventive things…

Slott: The way you’re saying that Dan, it’s like, (sings) “And now the end has come!”

Greenfield: No, I don’t mean it that way! (Slott laughs) I’m just saying when you do this, how much perspective, in your own mind, do you think about in terms of your role on Spider-Man? Or do you just simply say, it’s just what you’re doing now and you’ll think about that later?

Slott: No, I am keenly aware of the giant weight on my shoulders of “Don’t screw this up!” (Laughs) That is a constant. Like, you’re livin’ the dream but the dream… You’re the curator! It’s tricky. I remember when I came onto the Brand New Day team, there were four of us that were gonna pick up and do Spider-Man three times a month. To do that—no one man could do that. The days of people like Stan (Lee) who could do that are gone. So we were gonna have a relay team that would work like a hive mind. I remember walking into that room—the first meeting—not only had I made everyone mix tapes… 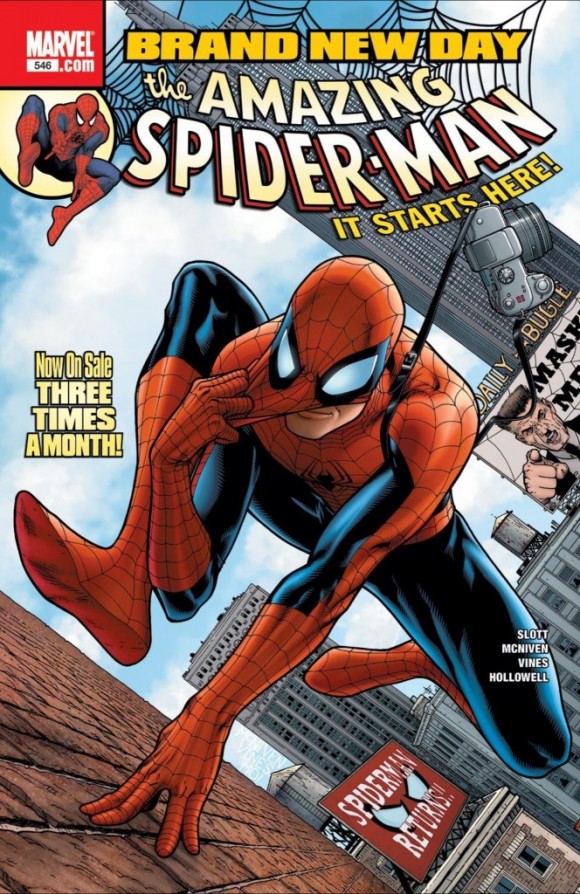 Slott: (Laughs) You know: Here’s every Spider-Man drawing ever made! “Yay! We get to do Spidey! Yay! I’m SO happy!” But not only that, you know there are less than 50 people who have written Amazing Spider-Man and we get to be in this honored position. This is such an honor! One of the things I like about being the Spider-Man guy is that there is a kind of fraternity and I’ve met so many of the Spider-Man writers over the years and either got to sit down and talk with them or be on a panel and pick their brain. And I’m forever going to be part of that fraternity! That’s amazing to me!

I was doing a signing in Indiana and Roger Stern was in town at the same time for some kind of college or high school reunion and he made a point of swinging by the store where I was gonna be at before the signing so we could just hang out and talk. And I’m just, like, this is the coolest thing in the world! I’m just hanging out and talking with Roger Stern!

It was crazy! One of the problems that was weighing on my mind was, when I was doing the Spidey solo, and we were launching Big Time, you want there to be some kind of electricity, some kind of excitement, that’s gonna hook readers and bring them in. We were saying for some time that we had two bullets in the gun that we hadn’t fired on Spider-Man for a long time. And that was Hobgoblin and Carnage, characters that fans clearly loved but that had been out of the books for years. You hadn’t seen either of those villains by the time Big Time was starting—for ages.

So we carefully planned out when Hobgoblin was gonna reappear and when Carnage was gonna reappear. And then later somebody came on and went, “Oh, I wanna do a Carnage mini,” and completely screwed up all the Carnage plans! (Laughs) I don’t even wanna get into it. 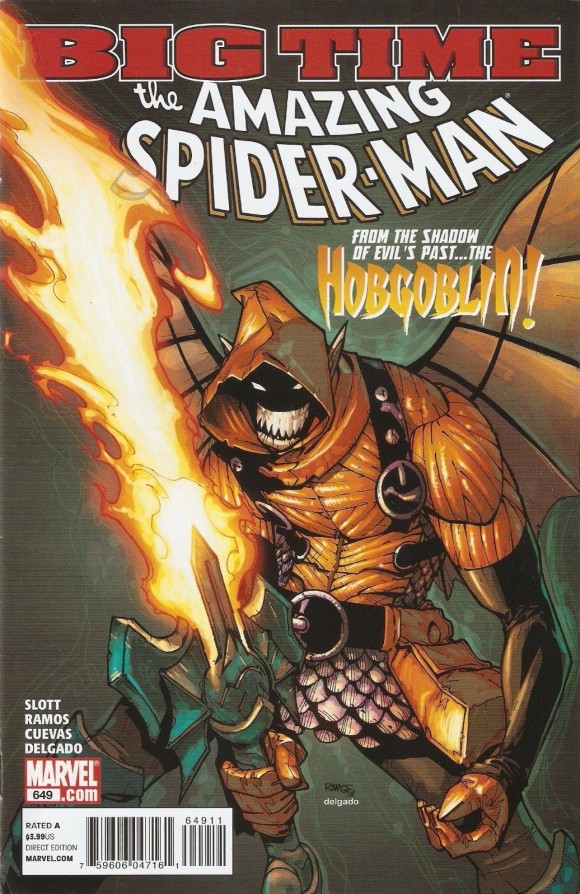 But with Hobgoblin—we bring in Roderick Kingsley, the original Hobgoblin, and we used our end-of-first-issue surprise, and everyone’s all excited, then you read Issue #2 and he’s, like, unloading his secret cache of Norman Osborn’s weapons. He’s restocking. He’s back in New York and yay and… someone’s already down there and they kill him and chop off his head. And they become the new Hobgoblin! And we knew exactly what we were doing. Like, “HEY EVERYBODY! Hobgoblin’s back!” Then we chop off his head! “Look! NEW Hobgoblin!”

And people lost their collective you-know-what! Which was great! It was what we wanted. And there were fans that were, like, “How dare you? I am dropping this book. This is Roger Stern’s greatest character! You’ve ruined Spider-Man for all time!” and “A-a-a-a—ahhhh!” Anger. And just like with Superior Spider-Man, we knew exactly how we were bringing Roderick Kingsley back.

But there’s a part of me that was going, oh man, this is getting uglier and uglier. Part of me really wanted to, like, reach out to Roger Stern and go: (whispers) “He’s not really dead!” And when we’re finally face to face and we’re hanging out and we’re just kicking back in these big comfy chairs in this comic shop behind a partition where the fans can’t see us, and we’re just chewin’ the fat. I’m like, “I can’t let this go. This is my chance to finally talk to Roger Stern and go, ‘I just wanted you to know, with killing Hobgoblin…’’’ And he’s just, like, “You didn’t kill him. Yeah, you cut off the head of a guy wearing a mask.” (Laughs) I’m, like: “EXACTLY!! How are people falling for this?” And we’re laughing about it!

Of course Roger Stern knows what’s going on. He’s the master! He knows how all this works. He knows what cup the ball’s under! So yeah, we were talking about stuff like that. Like, when I killed Peter and everyone was losing it and we were getting actual death threats—big PILES of ’em! We had to bring in the NYPD cybercrime unit! 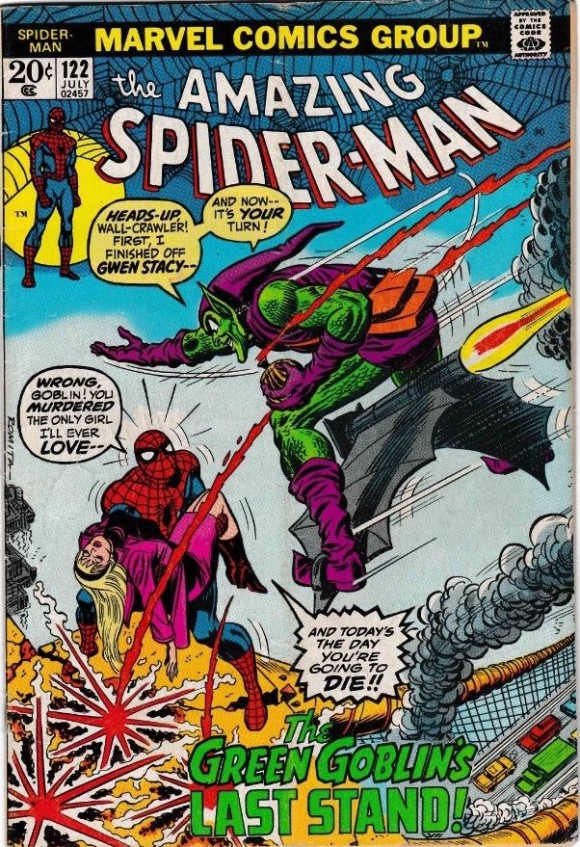 Slott: At one point, Gerry Conway reached out to me through direct message on Twitter. And I’m like, “Oh my God! Gerry Conway! This is amazing!” He was tellin’ me, “Don’t worry about it. The thing that makes you different than any other Spider-Man writer is you are the Spider-Man writer who is writing Spider-Man during the age of social media. And if social media had been around when I killed Gwen Stacy, I can’t even begin to think…!”

Greenfield: It’s true. I think of all the things that have happened in comics, when that happened with Gwen…you talk about breaking the Internet! That would have been insane. Did you go back and forth about that?

Slott: Yeah, we talked a bit…. They invited Conway to Amazing Spider-Man 2 because so much of it was based on his work with Gwen and the death of Gwen. They invited him to the premiere and they invited me to the premiere. We got together to go to this big Spider-Man after-party. The two of us were, like, we can’t talk about what we think about the movie here! “Ya wanna meet up? “Yeah!” So we met up the next morning and I’m having pancakes with Gerry Conway in a New York cafe. (Laughs) Just sittin’ around eatin’ pancakes and having breakfast, just chewing the fat about Spider-Man! 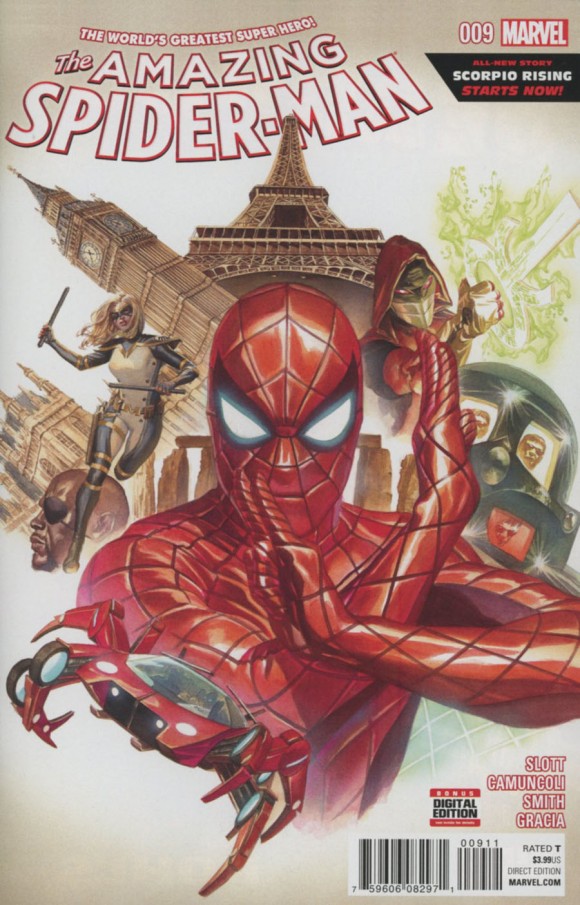 Greenfield: What did you talk about?

Slott: Just everything! Your feelings about the character and the history and the industry and… It’s amazing to be able to do this.

One of the pieces of advice I seem to get from everyone that I’ve met, from all the different writers, whether it’s Marv Wolfman or Len Wein or all these different Spidey guys, I think Tom DeFalco said it best to me, which is just: “Enjoy your time at bat.” Every single guy kind of said a different version of the same thing: You only get to write Spider-Man once. The minute you leave that stage, you’re done! Maybe you can come back and do a mini or something but this is your time. That’s really stuck with me because I’m really enjoying the ride and I really don’t want it to end.