The CHIP KIDD Interviews: The Secret of the Bat-Museum

Home » ACTION FIGURES & MERCH » The CHIP KIDD Interviews: The Secret of the Bat-Museum

Kicking off a new interview series — with Chip Kidd, book designer extraordinaire and a Batman devotee whose fanaticism rivals my own …

There’s a Batman museum in the sky over the real-life Gotham — a place where original art hangs on the walls, and books, action figures, statues and other toys line glassed-in shelves.

This is the home of book designer nonpareil Chip Kidd, whose collection of Batman memorabilia and art far exceeds anything I’ve ever seen up close in one place.

I really should have known that the guy who gave us Batman Collected — the pre-eminent book about Bat-memorabilia — as well as Bat-Manga and a number of other high-profile comics projects over the last 10-15 years, would have a stunning collection.

What I didn’t expect when I walked into his Manhattan penthouse — shades of Bruce Wayne — was just how overwhelming it would be.

A small foyer is decked out in original art and prints. To the right is a bedroom crammed with Bat-items that go back decades. The main area, the living room, is dominated by an original six-sheet from the 1940s Columbia serial starring Robert Lowery and John Duncan. On the couch are two oversized coffee-table books. Only they’re not actually coffee-table books, they’re bound volumes of original comic-book art with customized glass covers — complete issues of comic books, including Morrison and Quitely’s Batman and Robin #2. And there are the memorabilia-stuffed glass enclosures that go up to the ceiling, inviting and intimidating at the same time. You want to touch everything but, good lord, you don’t want to break anything. That’s not to say the place is cold. Quite the opposite. Chip is a warm host and there are few better ways on Earth to spend an evening than chatting about Batman … surrounded by all things Batman.

I met Chip online a couple of months ago when I did a feature on his Society of Illustrators exhibit featuring original Batman: Black and White sketch covers featuring some of the best artists in the world — comic books and otherwise — giving their take on the Dark Knight. (You can check out my favorite 13 COVERS here.) 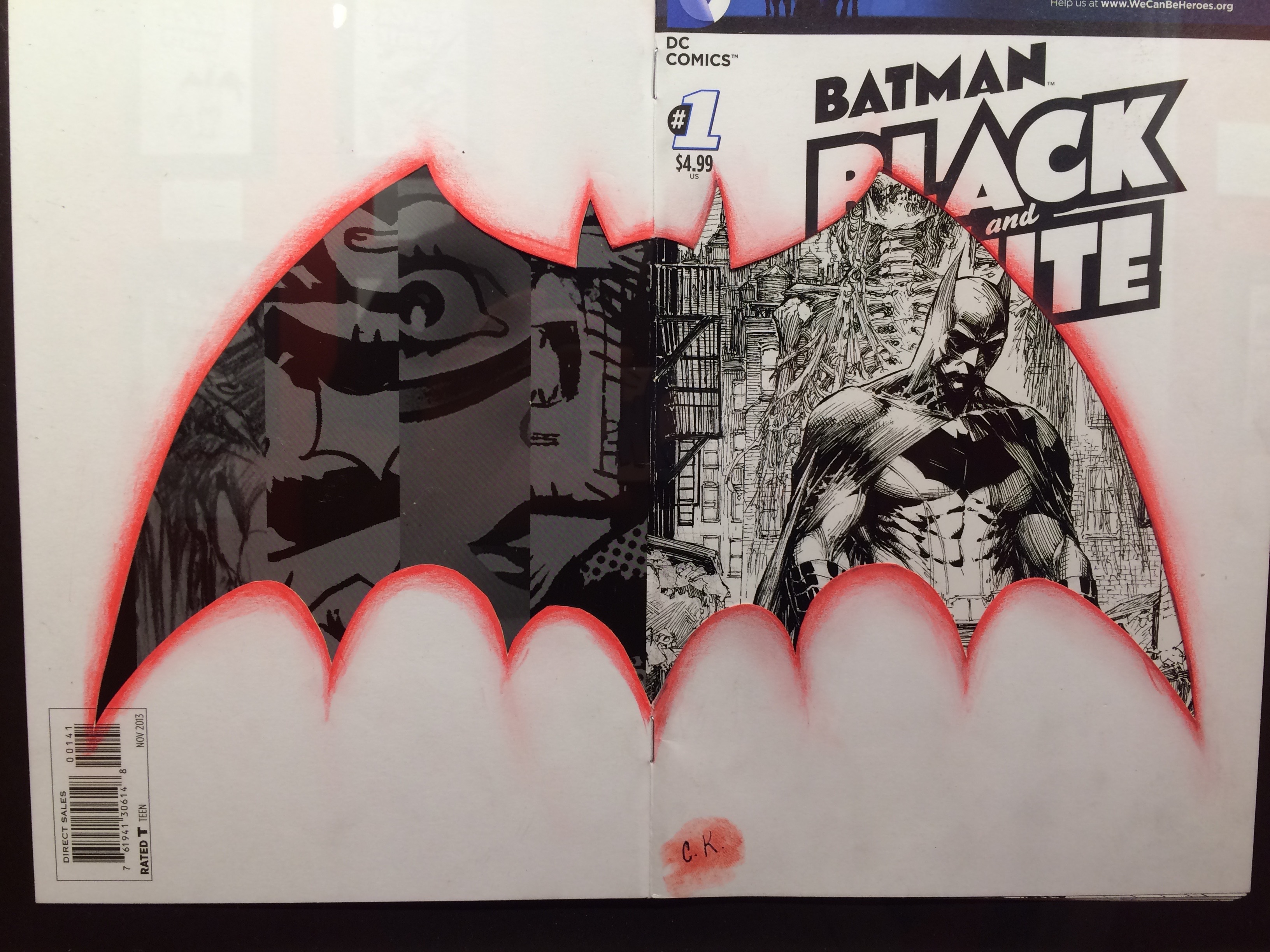 Chip’s own entry in his Batman: Black and White exhibit

We met up soon after and the end result of that first conversation is The CHIP KIDD INTERVIEWS, which you’ll see here over the next few months (in similar fashion to previous interview series with such Bat-bigwigs as Neal Adams, Denny O’Neil, Len Wein and Kelley Jones to name a few.)

Given just how magnificent his memorabilia collection is, that seemed a great way to start, as we cover how he discovered Batman (it was thanks to the Adam West TV show, of course) … and he chooses sides in that eternal debate: Mego vs. Captain Action … 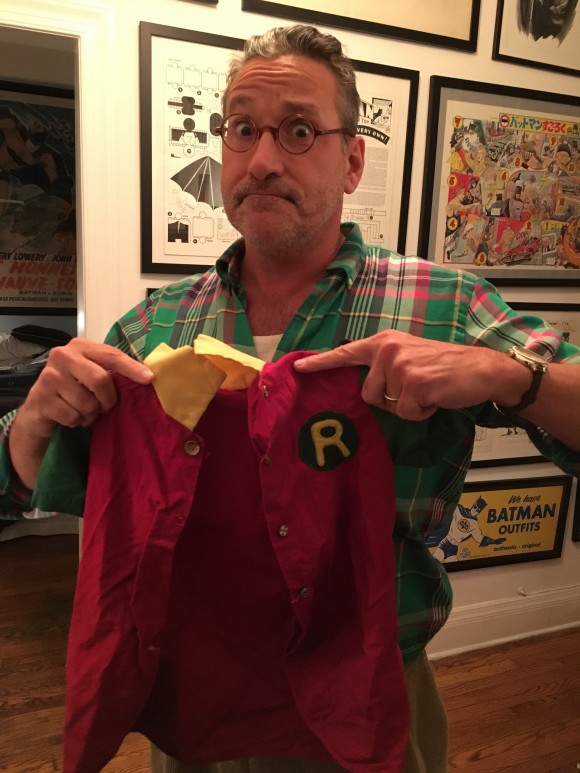 Dan Greenfield: Just to start it right off, how did you find Batman to begin with? How did this even start for you?

Chip Kidd: I was born in 1964. I grew up in southeastern Pennsylvania, a town called Reading. A very, totally Leave It To Beaver childhood. Suburbia. I had a brother who’s two years older and then the TV show started.

In retrospect, oh my God, I was only 2 years old when that show started. How would that even register with me? Then my brother eventually got married and had kids and I could see my niece and nephews at that age memorizing The Lion King. You really can perceive that stuff at that young age. So I remember watching it in prime time.

My brother was totally into it and, of course, I idolized my older brother. We would get the comics. The interesting thing at that time for us is that the comics were only available at a drugstore that you could not walk or ride your bike to. It was too far away. I mean, our parents were great about it but we would only be able to get comics if there was a reason to go to Ronco’s drugstore to pick something up.

The point of that is… Well, A) it made it very special. But B) I think it had a lot to do with why I was much more a DC kid than a Marvel kid. Because by that time, the Marvel stories had no beginning or end. You always felt like you were in the middle of one, which I didn’t like. At all. It would be like trying to watch a soap opera with just one episode. Dan: Now what years would these be?

Chip: Now, we’re talking the end of the ’60s so, ’67, ’68, ’69. Whereas the DC method was much more self-contained stories but I also just liked the characters better. Plus you could watch Batman on TV. You could watch sort of shitty Marvel cartoons but that was about it. I don’t know. That’s just kind of how it started and… I liked to draw so you start to kind of see things visually that way through the comics and then, yeah, Neal Adams happened and then there was this gradual shift almost like from the ’60s to the ’70s.

It kind of mirrored the change of the decades where as a kid you really wanted people to take Batman seriously and, of course, the TV show was the opposite of that. I remember the infamous scene—I guess it was in the movie—when Batman’s trying to shake the shark from his leg?

Chip: And my Dad was ROARING with laughter and I was SO angry and embarrassed by that because I really wanted to take it seriously. Dan: At what point did you start to get into collecting every month? Did you ever get to the point where you were filling in gaps or…?

Chip: You know, I had a mental block with actually subscribing. Like, I remember I loved to send away for stuff…but in retrospect, there seemed to be, like, if I subscribed to the Batman comics… it would seem like cheating.

Dan: I felt the same way.

Chip: I needed to go to a store and buy them. And then, of course, ditto the toys. And then that was the other thing! Just all the toys that came out and I ultimately did the Batman Collected book and talked about this, but the amount of stuff that was licensed and made as a result of the Batman TV show is STAGGERING! 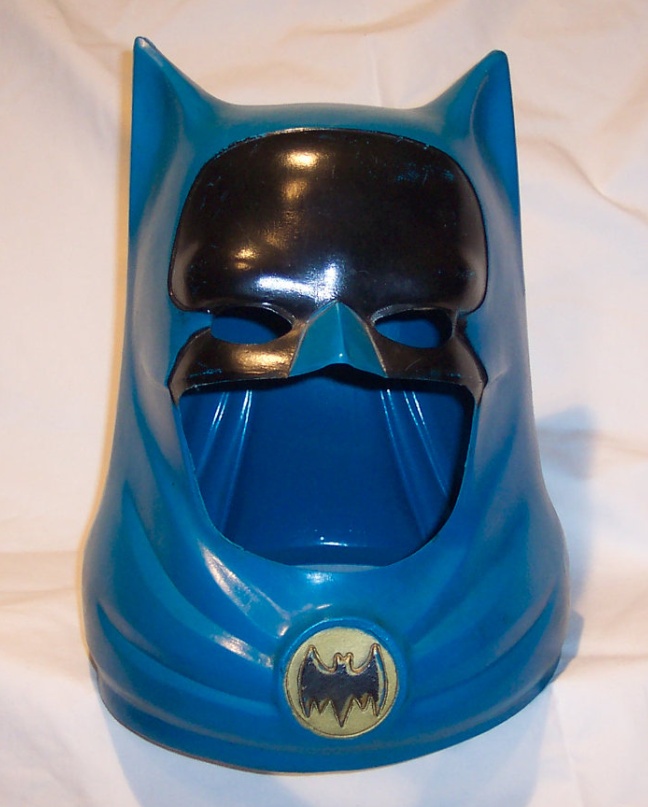 Not from Chip’s collection

Dan: What was your first? Do you remember?

Dan: Do you still have that?

Chip: I don’t have the one that I had as a kid but I’ve, uh…this sounds really pathetic and sad, but as I’ve been, like, adjusting my collection, it’s…not all about Ideal but the Ideal stuff was just the best.

Chip: Oh…there’s such a range of, you know, the helmet and cape to wear and I only became aware of things like the utility belt much, much later. And then there is the Holy Grail equipment set, which was all of it in one box. Dan: Which (someone was) selling at New York Comic Con.

But then, the figures, and of course Captain Action! The Captain Action dolls…and again I was only aware of the Batman one. It was only much later that I became aware that there even was a, quote, Action Boy. I didn’t know that.

But yeah, that is the first Batman doll and I had that and I just loved it. Of course, you lost all the pieces right away, which would make you long for them. But he really had it covered. And the little plastic figures were just so, so great. The Ideal stuff.

And the other thing about Ideal was that they had Murphy Anderson do a lot of their artwork so you had, I mean, now you see this all the time but back then, you’d be just like, “That’s the guy that draws it in the comic and he’s making the toys, too!” That’s great! Captain Action Batman and Robin in the center

Dan: Now, were you into Megos at all?

Chip: Yep! Very big point and…I mean, it gets so geeky here: I remember when the Megos came out. I had the first ones with the removable masks and I totally got into it. I had the carrying case and all the different characters and all this but it just wasn’t the same.

Dan: That’s interesting. Now, was it because they came second? They came after Ideal?

Chip: And I probably would not have articulated it that way at the time but I just…

Dan: The figure itself or the packaging or what was it that…?

Chip: The GLOVES were so clumsy. Now, curiously enough, the Captain Action Batman didn’t HAVE gloves. And THAT was a problem. I don’t know. It just seemed like it was some sort of shortcut.

Chip: But you know, I had the Batmobile and the cycle and all this stuff and enjoyed it thoroughly. But I guess as I’ve grown older, as a collector, definitely one of the things I did was divest of all my Mego stuff. A glimpse of my own collection, the centerpiece of which is Mego and Figures Toy Company Batman and Robin

Dan: …between the guys — and it tends to be guys — who are the Captain Action kids versus the Mego kids.

Chip: And it’s funny because it’s only like a six-year difference and yet it seems like a generation to me.

Dan: Yeah, it does. One is more ’60s-focused and the other is more ’70s-focused. And with me, Captain Action was something that I read about in back issues when I was a kid. I didn’t even know who Captain Action was. Mego was everything and when I started picking up — I wasn’t even aware that they were calling them Silver Age at the time — but picking up old ’60s Batman comics and seeing the ads and saying, “That’s really cool-looking!” But I didn’t see a Captain Action figure until I was adult. I never saw him.

So you grew up with all of the toys. Your first was the helmet and the cape. What was your favorite? Growing up, until you became a teenager, what was your absolute go-to, whether comics or toys or whatever?

Chip: Oh, it’s so hard to pinpoint any one thing. I was saying to you earlier that I don’t have a lot of the original stuff from when I was kid but I have my Batman lunchbox, which had tons of toys in it. I remember I used to bring that to school, not with my lunch in it but with the toys in it. And I also remember—this is getting off-topic, but—the whole idea of dragging Batman stuff into the classroom seemed really taboo.

Dan: Now why was that?

Chip: Because that was silly and frivolous and belonged at home. One of my teachers, I remember, gave me that little lecture one time. And yet I would always try to work it in to art projects or whatever I was doing.