Riding Along With CLIFF CHIANG and PAPER GIRLS

A talk with one of our favorite artists about his new creator-owned book with Brian K. Vaughan… 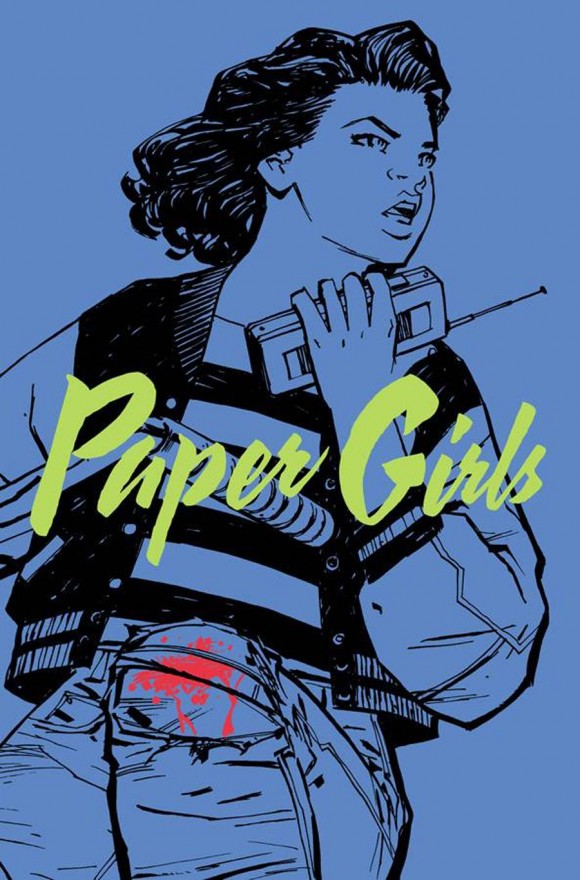 There are a handful of artists working today that I imagine that if I could draw, I’d like to be able to draw like them. Cliff Chiang is one of those artists. I think it helps that he seems to like, or at least work on, things I like and appreciates the things about the form that I appreciate. We’re also only a few years apart and each grew up in suburban New Jersey.

This last part is significant because his new creator-owned book — Paper Girls from Image Comics — takes place in the 1980s in a neighborhood squarely in suburbia (though the setting is Ohio). It’s also the latest from Brian K. Vaughan, so this is a pairing of titanic talents.

Issue #3 is out 12/2 and Cliff and I recently sat down to talk about the series. Now, I don’t want to spoil anything if you haven’t picked up yet. Though I do recommend you do so, because it draws you in immediately and is great to look at besides.

What’s it about? Well, four 12-year-old paper girls get into a mysterious adventure involving what may or may not be aliens.

That’s all I can really say about it. I’ll let Cliff take it from here … 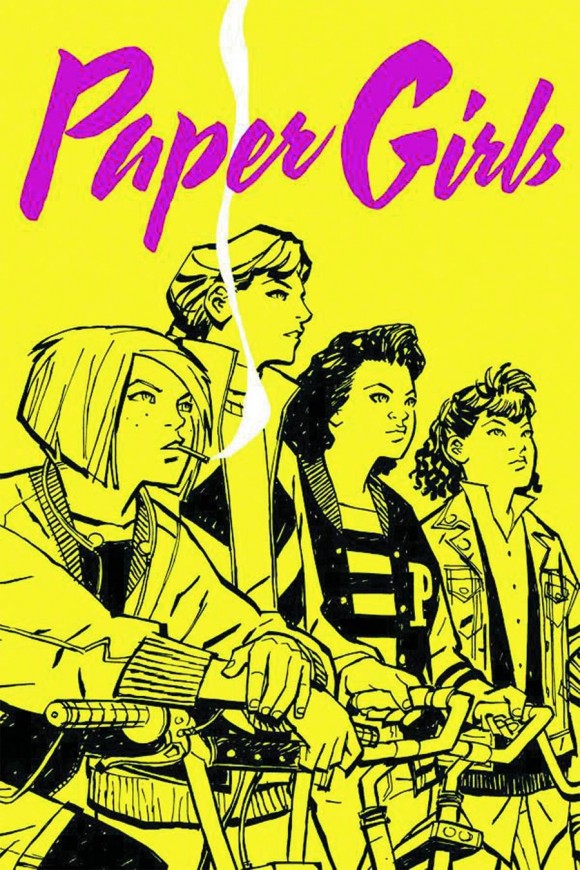 Dan Greenfield: So tell me so far how things are going with Paper Girls. It’s your first creator-owned book, right?

Cliff Chiang: Yeah! I couldn’t have asked for a better reception. … It seems like people are really responding to it. We’ve been working on it for so long! I’ve launched a few books already but, you know, I still woke up Wednesday morning (that #1 came out) an hour earlier than I was supposed to, and just kind of in a cold sweat. But it’s been great to see that people seem to like the book and I hope they stick with it. It’s just gonna get weirder and weirder.

Dan: Tell me what the impetus was, how you got involved with it, whose idea it was? Tell me a little bit of the origin of how it all came together.

Cliff: Well, Brian Vaughan and I have been trying to work together for years. We worked together 15 years ago on Swamp Thing and it was a great experience but the way things work in comics doesn’t always match up. When one person is free, the other one isn’t. So we’ve been trading emails constantly over the years.

As Wonder Woman was winding down, he approached me and it sounded like a great idea to work together. Then he sent me the pitch for Paper Girls and to be honest it was not really what I was expecting at all but I loved it. It was a great idea and I knew I had to draw it because I thought if anybody else drew it, I would be picking it apart. I knew it had its hooks in me despite being really kind of an odd duck so I said, all right, let’s go do this book about four 12-year-old paper girls. 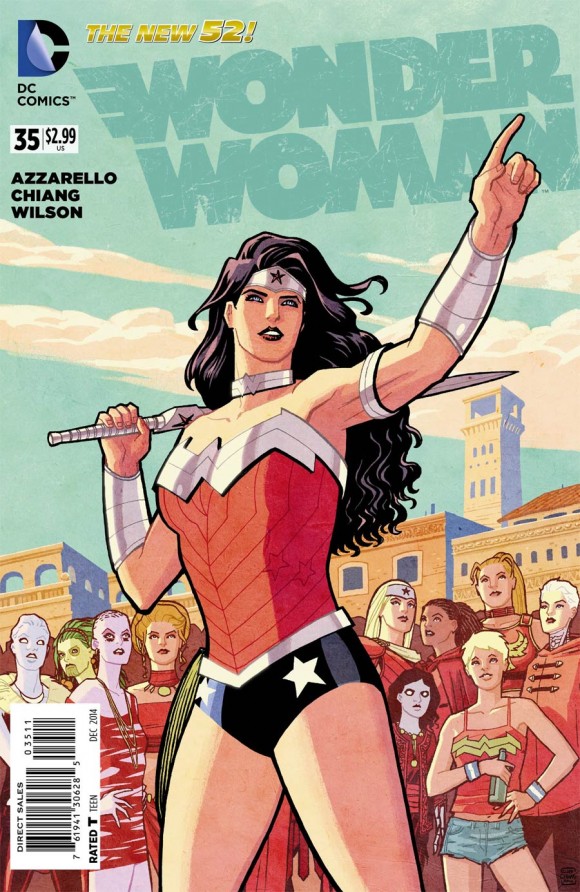 Dan: Was it nerve-wracking to go from Wonder Woman to Paper Girls?

Cliff: Yes and no. I would say the biggest thing about it is that it’s actually been liberating. Because… with Wonder Woman, on some level, I was always holding onto the burden of expectation in the sense that there have been great Wonder Woman books so how do we measure up to that? Readers have an idea what Wonder Woman looks like and what a Wonder Woman book should be like and with Paper Girls, I was able to let all that go and just create something that felt personal to me, and what Brian and I wanted, and that has been a liberating process.

I mean, I feel when I’m doing my art now that… in a lot of ways what you’re buying into is direct communication with the creator and then getting almost a peak into their personality and what they like. Paper Girls is very much a personal story for me and Brian.

Dan: Are you doing it an arc at a time? Is it an open-ended story? What’s the structure of the way the book is going to be?

Cliff: It is ongoing. We have an end in mind. The arcs are five issues. So there’s a rough structure in place but hopefully people will keep us going as long as they can. 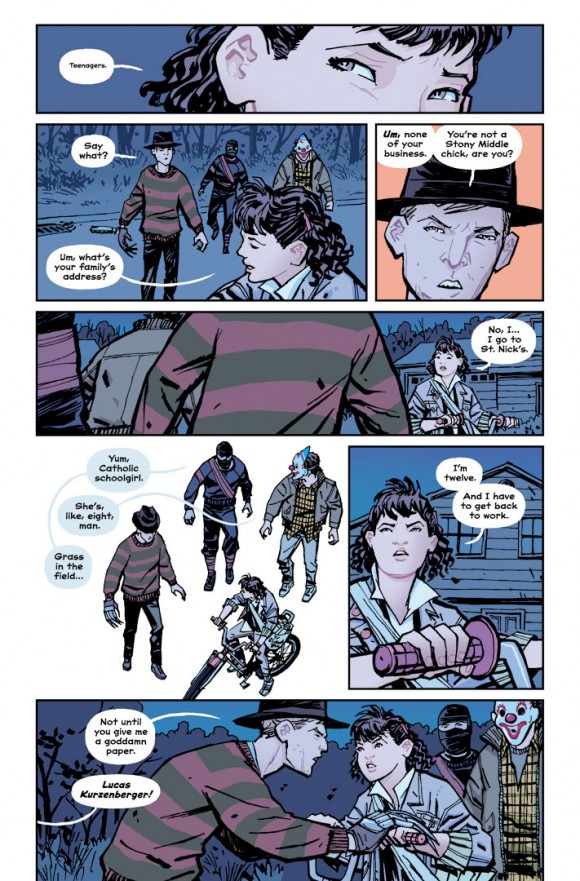 Dan: One of the things that struck me was the use of color (in the book). Matt Wilson is the colorist on the book. Tell me about the interplay there. How much is it your direction and how much is it a collaboration? I’m always curious as to how that works.

Cliff: Well, you know, Matt and I had developed a really great working relationship over the course of Wonder Woman but going into this we realized it couldn’t be the same book. And I wanted to do something that was actually more color-theory intensive but less rendering and that kind of less busywork. In much of the same way, I was trying to strip my own work down, realizing that when you do comics, it’s very easy to overwhelm the line work with color if you’re not careful. So much of Paper Girls is about presenting a reading experience that just pulls you in and doesn’t necessarily… not that it’s not challenging but that it’s something that a new reader can come into and read and follow very easily.

Dan: It was very inviting.

Dan: By the same token, you went right into it and it grabbed your attention. It struck me as mundane in the sense that you had these everyday lives but then you had these twists and then it would go back to…

Cliff: Yeah. That was the other thing, too. Because of the setting of it, because the basic story is suburban…SO suburban, that when we did the colors, to be too literal about it, everything would be brown, you know? So we needed to step back and say, well how do we stylize this? How do we make this evocative of the era? And yet, at the same time, feel like you’re getting something real. Because we could color this in, like, neon ’80s colors but you wouldn’t believe any of it. So having something that was pleasant to look at that would help you follow the story and then enhance it… 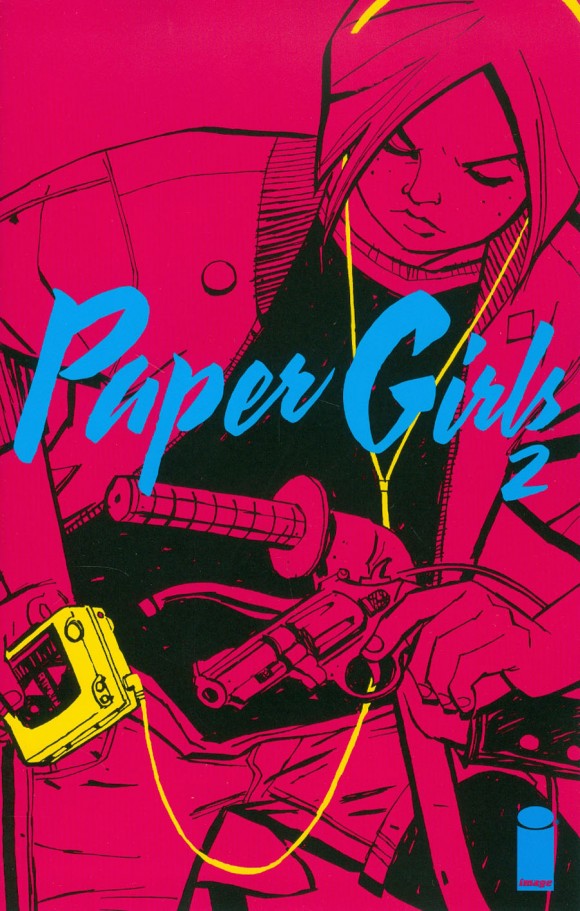 Dan: Now, the fact that it is essentially a period piece—it takes place in 1988—what kind of research did you do? I noticed the haircuts, especially on the girls. That’s what I remember the ’80s being like! I was older than that generation by several years but I remember them well.

Cliff: Luckily, Brian and I actually bookend the girls. The girls are like squarely in between Brian and me. Brian’s younger than me by a couple years so they’re right in between him and me. So I remember the era very well and it wasn’t too much of a stretch to try and recreate it. I wanted to do something that was set in the ’80s but not a clichéd version of the ’80s. The ’80s I remember growing up in, in suburban New Jersey. So the haircuts and the clothes… I wanted these girls to feel like ones that I grew up with.

Dan: Now what’s been the biggest surprise so far in actually working on the book?

Cliff: Working on the book… in a way it’s been both difficult and super-easy. Because so much of it is personal, it does feel like there’s no stretch involved in making it different from other things we’ve worked on. So… I expect a lot of myself in doing it because this is something that I’m responsible for, like as a creator-owned book. So it represents me in a different way that other books haven’t. But at the same time, it’s also easy to let go of those expectations and just have it be expressing yourself more purely and fully.

Dan: Anything else you want to add about the book and where you’re at?

Cliff: I would say that the book is strange. Part of the reason we didn’t release that much information about it before it came out was we kind of have a hard time describing it. (Dan laughs.) But, you know, sometimes that’s a good thing. We do know what it’s about but what it’s about is so strange and part of the — hopefully — the enjoyment of reading the book. 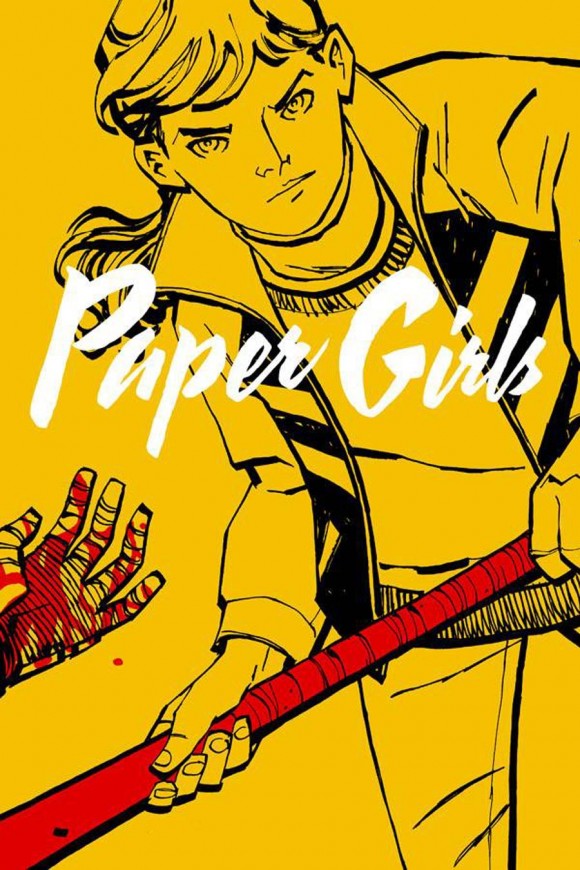