“A History of Adventure!”

She was a novel written by H. Rider Haggard (creator of Allan Quatermain, ancestor of Indiana Jones) and published in 1887. An immediate hit upon release, it has never gone out of print and has sold over 100 million copies to date. Despite its relatively non-descript title, this tale of high adventure was so compelling it has been transformed into a motion picture numerous times, and even Marvel Comics got in on the act, publishing a full-length adaptation in the 1970s.

No less a producer than Merian C. Cooper (who, just two years earlier, worked on a little film called King Kong) was behind a 1935 adaptation, the first talkie version of the story. It opens with a scientist, dying of radiation poisoning, who summons his nephew Leo (Randolph Scott) and, supported by his scientific partner Horace Holly (Nigel Bruce, most famous as Watson to Basil Rathbone’s Sherlock Holmes), reveals he has been searching for a radioactive element that he believes can preserve life, making people nearly immortal. 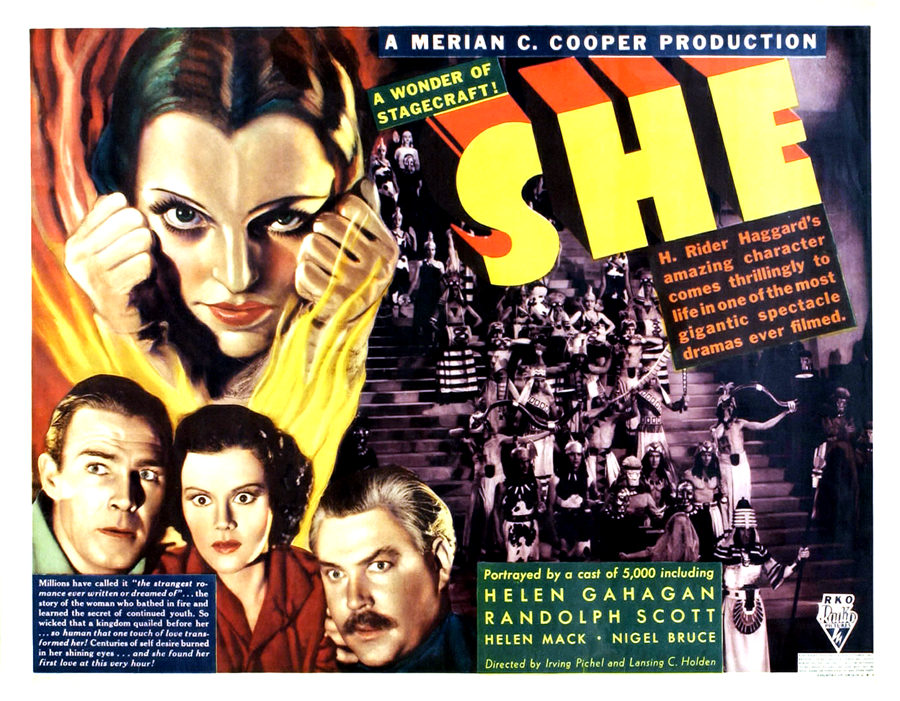 The scientist’s experiments derive from a letter, passed down through his family for generations, about an uncle and his wife who discovered a remote, closed-off society living in Siberia. Supposedly in this tiny, hidden spot is something called “The Flame of Life”, a sort of reverse Fountain of Youth. The only piece of evidence of this whole story is a small statue supposedly taken from the village. The scientist implores Leo and Horace to take up the mission and find the Flame of Life. As Leo and Horace agree, the scientist succumbs, and dies.

Leo and Horace head to Siberia, and find a small outpost run by an old man named Dugmore and his daughter Tanya (Helen Mack). At first, Dugmore is less than friendly to strangers, pulling a gun on them. But eventually he and his daughter join the expedition, and we’re treated to some of the really cool, in-camera combos of sets and matte paintings that Cooper’s productions were so good at. Sure, they really don’t look real, exactly, but they have a classic feel, like they’re ripped from illustrations of old adventure novels. 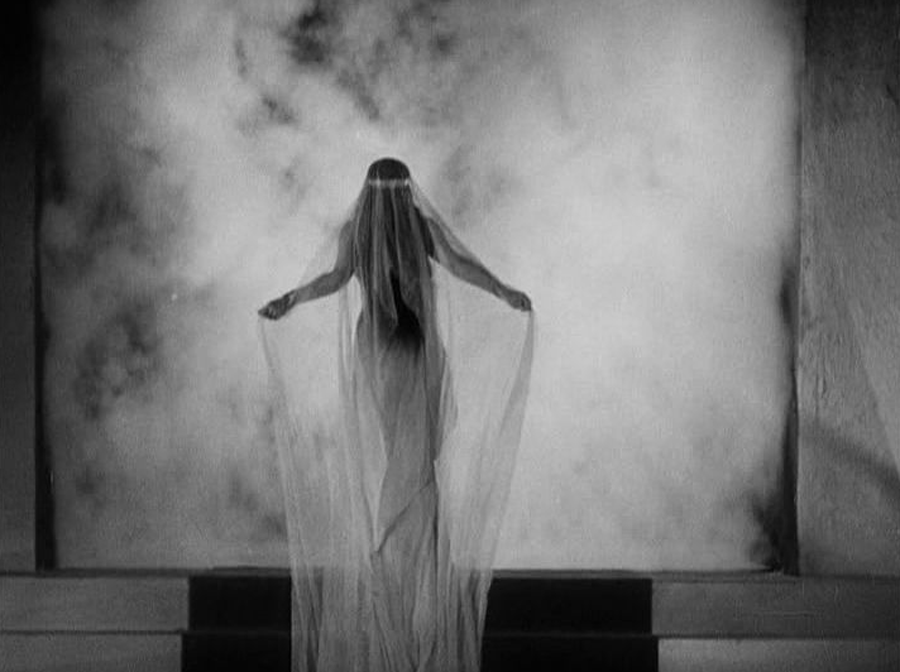 Eventually our little band of explorers (minus Dugmore, who is killed in an avalanche when he lets his greed get the best of him) find the mythical land they’ve been searching for, hidden inside the crack of a glacier, a place called Kor. This strange land is run by She, aka Hash-A-Mo-Tep (Helen Gahagan). She takes one look at Leo and believes he is actually his older relative, the one who visited Kor with his wife. She, who claims to be immortal, falls for Leo, believing he is the reincarnation of his uncle, a man she loved but had killed when he would not leave his wife.

After promising to share the secret of immortality, Leo falls for She and decides to stay in Kor, even though Holly and Tanya are told to leave. Tanya, who has fallen for Leo, tries to talk him out of it, and is used as a human sacrifice for her trouble. When Leo sees this, it wakes him from his stupor, and he decides to try and escape with his friends.

A lot of these scenes are very talky, but they’re made more lively by the astounding art direction. There’s a particularly great scene where the camera pans across a row of towering statues, a truly wonderful piece of set dressing (they reminded me of the Seven Deadly Sins from the origin of Captain Marvel, and makes me think what an amazing movie could have been made if the Big Red Cheese and Merian Cooper had ever been paired up for a feature film. But I digress…). 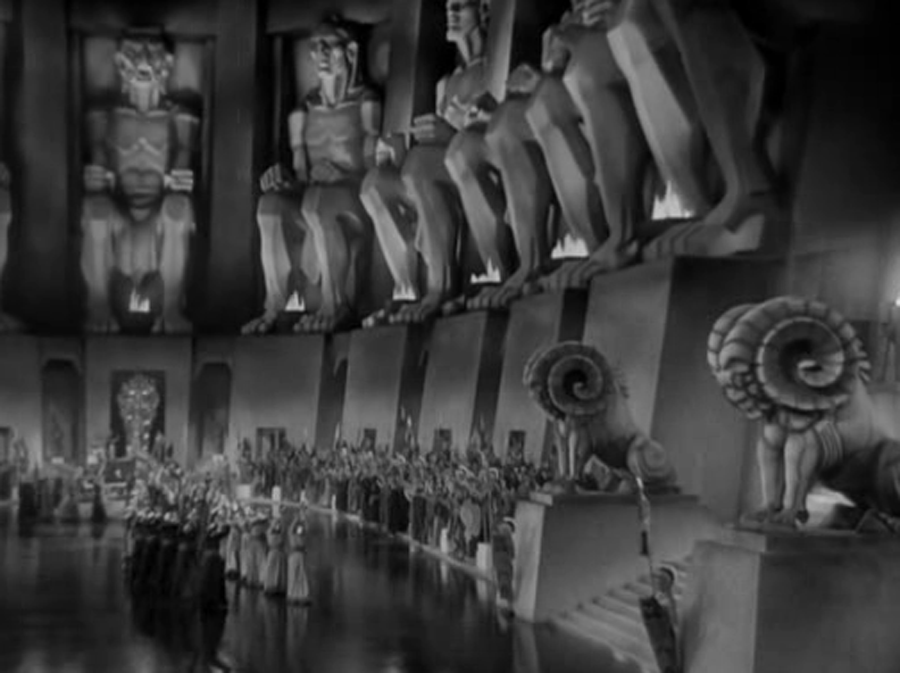 Our trio escapes various pursuers and ends up in She’s sacred temple, where the Flame of Life resides. She tells Leo to enter, but he refuses, so she does. Unfortunately, this time the effects are less than rejuvenating. She collapses and dies, and Leo, Tanya and Holly escape Kor, while the Flame of Life rages out of control. These final scenes in Kor again feature stunning art direction, heavily influenced by German expressionism. Leo, Tanya and Holly make it home, where Holly tries to explain why the Flame of Life did what it did to She. Tanya refuses to believe it, saying she thinks True Love saved them from the villainous She. The End.

She is nonsense of course, but gorgeous nonsense. The sets are spectacular, and the art direction feels like a cheerful mish-mash of pulp adventure novels and German expressionism. The performances are a bit on the flat side (in particular, Gahagan as She isn’t nearly as memorable as she should be, given how crazy the character is), a mistake Cooper didn’t make with Kong. It’s still a whole lot of fun, and all credit should go to the filmmakers, who managed to create a spectacular adventure epic based on mostly spit and bailing wire. 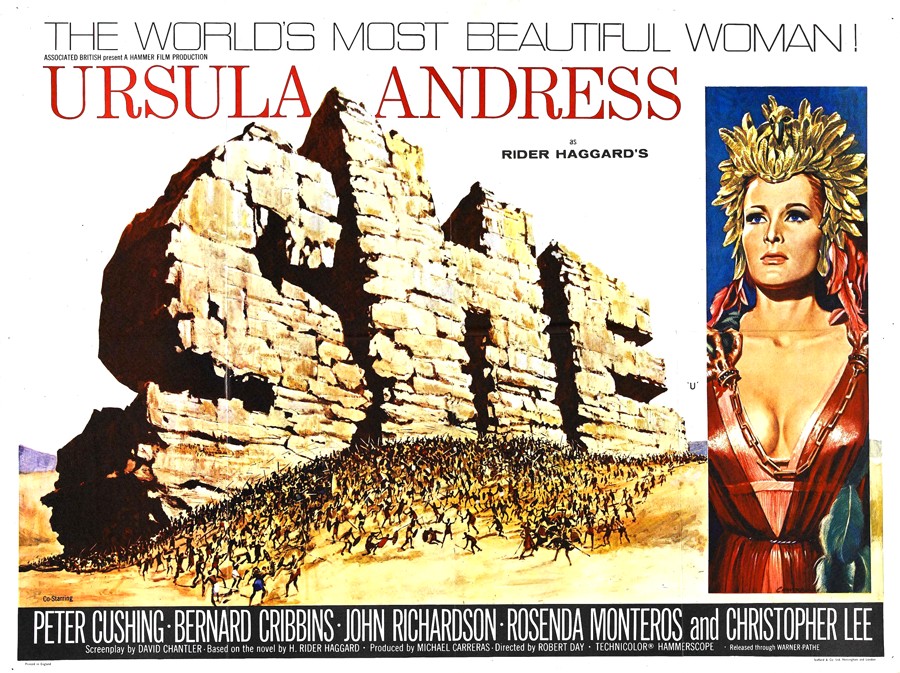 Special effects had come a long way by 1965, when the legendary Hammer Films took their shot at She, casting no less than Ursula Andress as the, er, titular character. It also stars Hammer regulars Peter Cushing and Christopher Lee as, respectively, Professor Holly and She’s right-hand man, Bilali.

As you might expect, this version is much more lusty and unreserved than the 1935 one. It opens with a belly-dancing scene that would have given the drips at the Hays Code a heart attack, and Andress (again, as you might expect) is given a lot of low-cut, revealing outfits to parade around in. But she’s no pushover — She rules the hidden city of Kuma with an iron fist, tossing slaves into the Pit of Flame when they disappoint her. Unfortunately for both, Bilali turns on She when the opportunity for immortality proves too enticing. 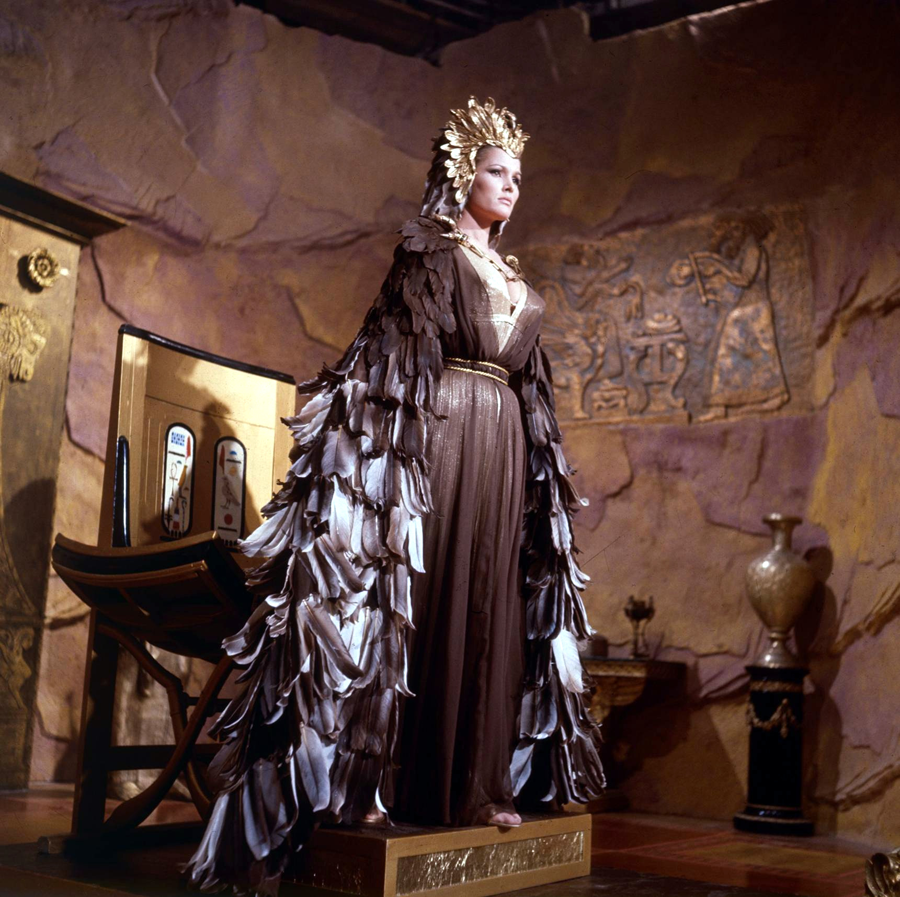 The 1965 She has a lot going for it, especially if you like the veddy veddy British thing seen in films like Gunga Din and The Man Who Would Be King. Given Hammer’s rep for blood and gore, their adaptation is fairly restrained, and maybe they could have come up with something more memorable if they had really let loose. But, as we’ll see, sometimes you can get a little too loose.

She hit the big screen again 1982, with tough chick Sandahl Bergman in the title role. After an on-screen quote from the original novel, the filmmakers proceed to chuck everything about the source material out the window, and go off on their own weird-ass course.

Taking place 23 years after the apocalypse (Trump 2016!), we follow three people: Tom, Dick and Tom’s sister Hari (yes, really). A gang of Nazis (jeez guys, give it up already) drags Hari off, and Tom and Dick give chase. They wind up inside a big castle that is ruled by She who, despite being played by the ass-kicking Bergman, is a pretty passive character here. She decides to help Tom out after being told to do so thanks to a local seer. 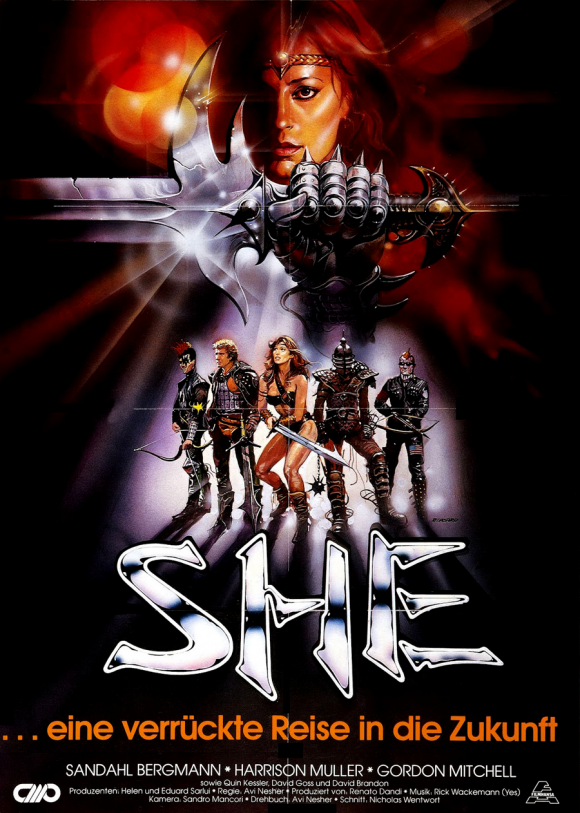 Looking like it was made for 50 bucks, this She features a giant in a tutu, a gang of yuppies that turn into werewolves, a guy with laser eyes, and a stuntman in a Frankenstein mask that I’m positive was bought out of the back of an old Warren magazine. The one thing this version gets to do that Hammer could not is show nudity — at one point She wades into a rejuvenating pool, which of course she has to do topless (note: I am not complaining).

The 1982 She is a giant mess, and is only fitfully interesting, in a looking-at-a-car-crash kind of way. Large chunks of screen time are given to a comic-relief character that isn’t the least bit funny, the effects are bargain basement, and as I said She is much too wan to be interesting. Not that Sandahl Bergman was Sigourney Weaver or anything, but as she proved in Conan The Barbarian she could hold her own in action-based fantasy epics. Here she/She is left stranded. 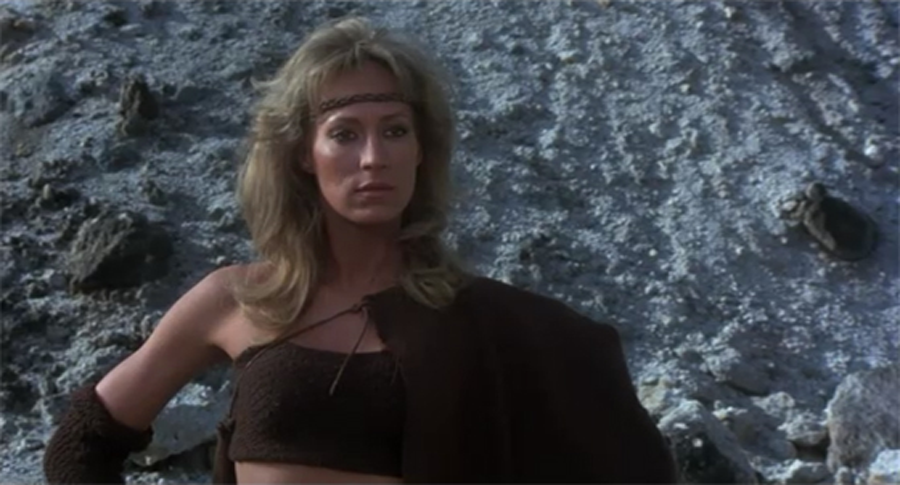 A much more faithful adaptation can be found just a few years earlier, with Marvel’s 1977 comic book, part of their Marvel Classics Comics line of extra-length stories with no ads. Written by John Warner and drawn by Dino Castrillo and Rod Santiago, Marvel’s She is a relatively dry affair. The art is fine, nothing memorable, and there are massive chunks of text fighting it for space on the page.

The She in question can’t help but remind readers of a typical Marvel super-villain—at one point she blasts someone with fire that shoots from her hands, among other displays of super powers. Another change from the movie version is She is given a lot more to do and say. It does rob her of some of the mystery found in the character, but you can’t blame writer John Warner, really. With no budgetary limitations, it makes sense to give readers more of the character that people plunked down their 50 cents to see. 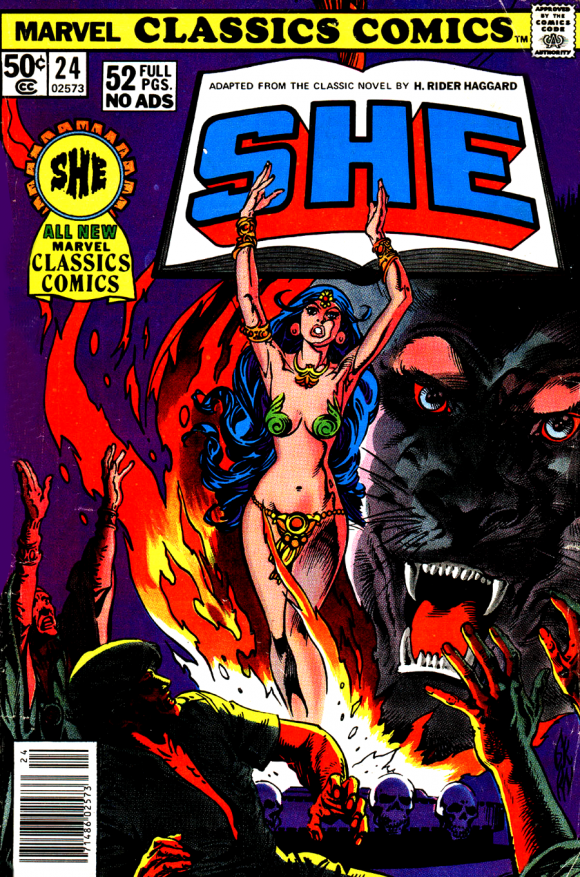 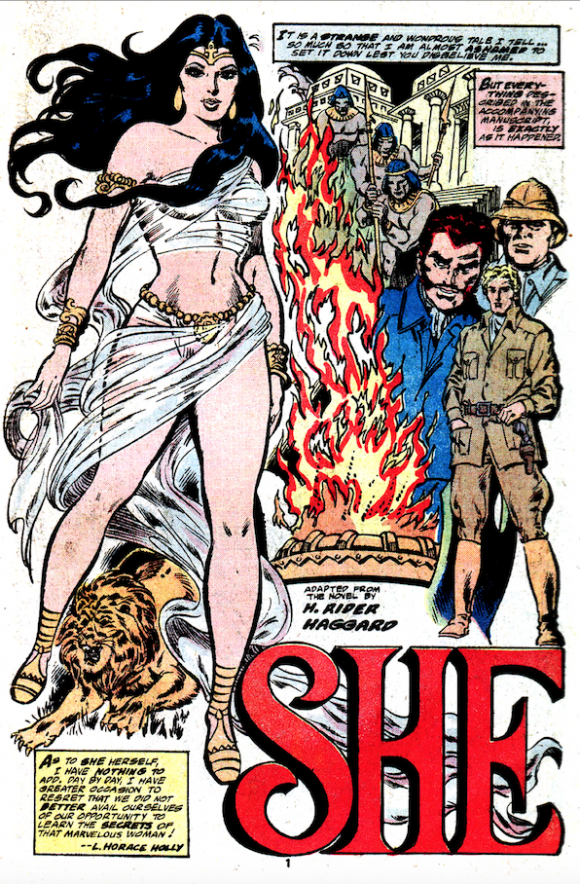 With Hollywood dusting off any and all pre-made IPs to be found, will another version of She ever make it to the big screen? It’s certainly possible; though it’s probably a safe bet that if you asked a thousand moviegoers what She was, not a one would be able to tell you (in the business they call that the John Carter Effect). There are some outdated concepts of Victorian exceptionalism found in the original story, but all that nonsense could be dropped in favor turning She into a feminist, female-led sci-fi fantasy epic, and we need more of those.

If you were interested in trying a version of She out, I would recommend the 1935 film above the others. It’s a bit creaky like a lot of early talkie films are, but it’s a visual delight and Merian C. Cooper always knew how to put on a show. It’s goofy fun, and provides a fun insight into what big budget blockbusters looked like 80 years ago.

Rob Kelly is a writer/artist/comics and film historian. He is the co-host of The Fire and Water Podcast (and the host of its sister show, The Film and Water Podcast), the co-creator and writer of the award-winning webcomic Ace Kilroy, and the creator of the book Hey Kids, Comics!: True-Life Tales From the Spinner Rack. He is working on a romantic comedy adaptation of H. Rider Haggard’s book, called He Said, She Said.