New looks at old flicks — and their comic-book adaptations!

Frank Oz’s candy-colored comedy/horror/musical Little Shop of Horrors (based on the stage musical, itself based on Roger Corman’s 1960 non-musical film) stars Rick Moranis as nebbish Seymour Krelborn, who works in Mushnik’s flower shop run by old man Mushnik (Vincent Gardenia) alongside the sweet and sexy Audrey (Ellen Greene). Life is hard; the flower shop is located in an unnamed Skid Row and there are never any customers. To make matters worse for Seymour he has a secret crush on Audrey, but she is so lacking in self-esteem that she can’t even bring herself to dump her physically abusive boyfriend Orin (a leather-jacketed, motorcycle-riding dentist played by Steve Martin). 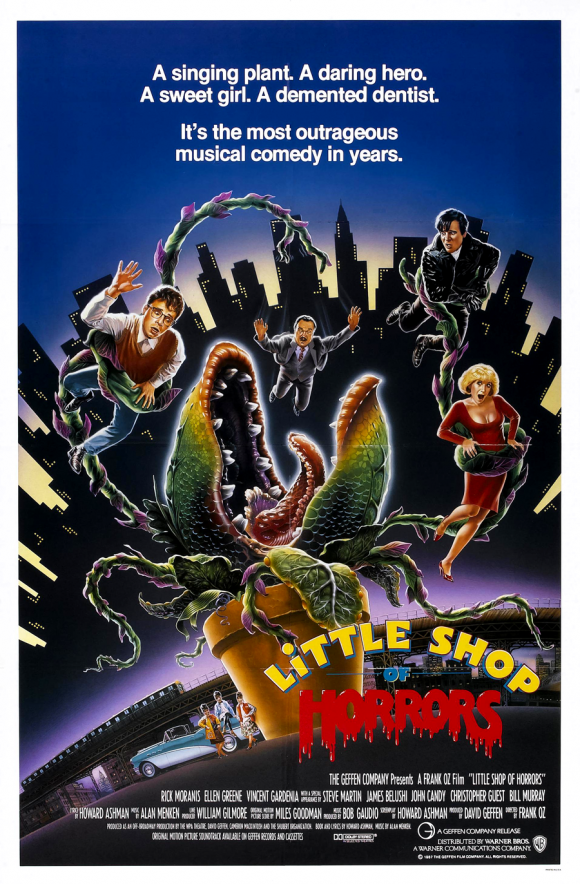 After a long dry spell, Mr. Mushnik decides he’s closing the store. Desperate for something, anything, that will bring in some business, Seymour shows his boss the strange new plant he’s been nurturing in the basement—a smiley-faced weird little thing he calls Audrey II. It takes all of five seconds of this plant sitting in the store window before it attracts the eye of a customer (Christopher Guest) who walks out with some flowers. Krelborn explains that he found the plant a few days ago, during a weird solar eclipse, just sitting there in a Chinese flower shop. Struck by its sheer oddness, Krelborn took it home.

Unfortunately, even though the Audrey II attracts more customers, the plant itself seems sickly. Krelborn tries to figure out what it needs, until he accidentally cuts himself on a thorn. Realizing that Audrey II thrives on blood, Seymour finds himself in a difficult spot: He needs the plant to keep the store open and Audrey in his life, but doesn’t have enough blood to keep it happy. What to do? 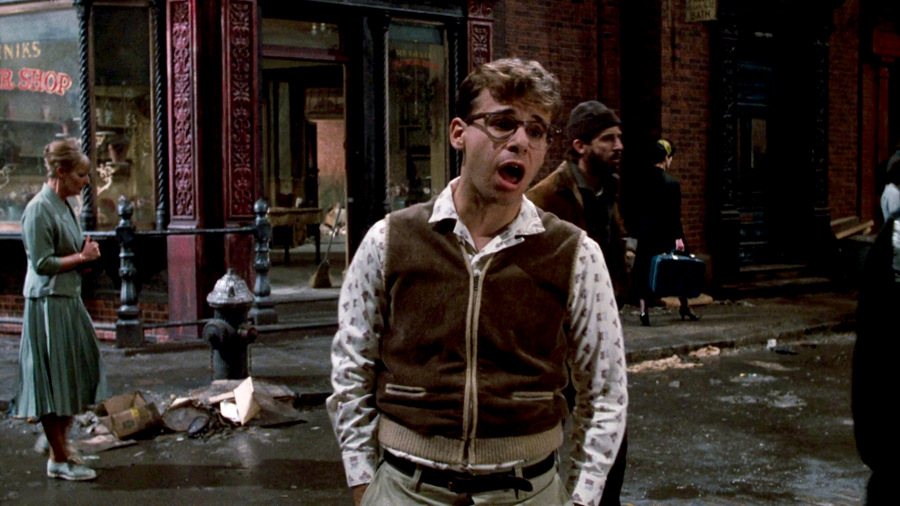 Before you can say “Grand Guignol,” Audrey II has gulped down several formerly alive people, but all it does it ask for more. Seymour is horrified; all he wants to do is run off with Audrey and never come back. Free of Orin’s abuse, Audrey responds enthusiastically to Seymour’s declaration of love and they plan to pack up and find a nice little house somewhere.

Audrey II overhears all this, and tries to kill both Seymour and Audrey, revealing in the process it is an alien from outer space with plans for world conquest. After Seymour is approached by an executive from a botanical company (Jim Belushi) who offers to buy the Audrey II with the idea of selling saplings all over the country, he realizes he must destroy Audrey II or it will mean the end of the world! 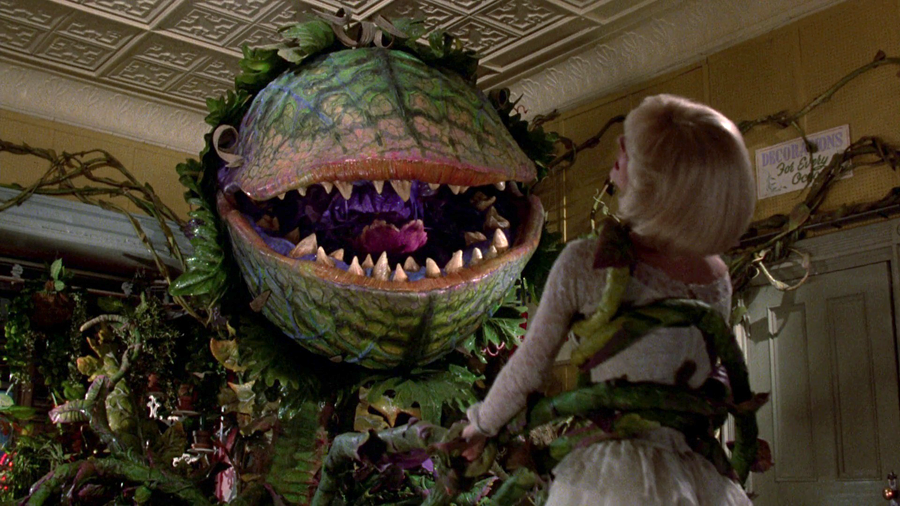 Seymour manages to kill the fearsome plant, and later he and Audrey marry and run away together. One small problem: As the camera pans out over their beautiful home and garden, we see a tiny, smiling Audrey II plant among the flowers.

Despite the presence of rousing musical numbers and a cast of comedy all-stars, Little Shop of Horrors is a fairly nasty piece of work (it could have been even nastier; more on that in a second). Pretty much everyone in it is damaged, greedy, or just plain sadistic, and director Frank Oz uses deep shadows that loom over his characters. I know what you’re thinking—a black comedy/horror/musical, that’s natural material for a comic book adaptation, right? 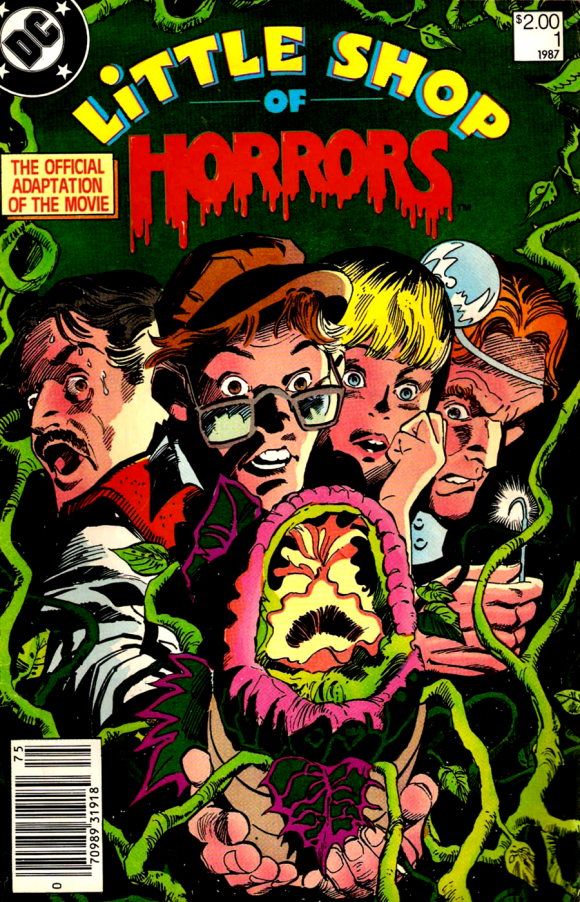 Yep. Simply cover-dated 1987, DC published a Little Shop of Horrors one-shot, written by barnburner Michael Fleisher and drawn by Gene Colan and Dave Hunt (the movie was produced by Warner Bros., DC’s parent company, so that probably had something to do with it).

Even though Fleisher converts the song lyrics into internal monologues, the absence of the music itself makes the comic-book version an even grimmer, darker story — perfect material for Colan, who excelled at rendering tales that took place in the aforementioned deep shadows. Running over 60 pages(!), the adaptation works a lot better than it has any right to (even without the actor likenesses). Tonally, its grim humor wouldn’t have been completely out of place in DC’s 1970s mystery titles like House of Mystery, House of Secrets, or even Plop! 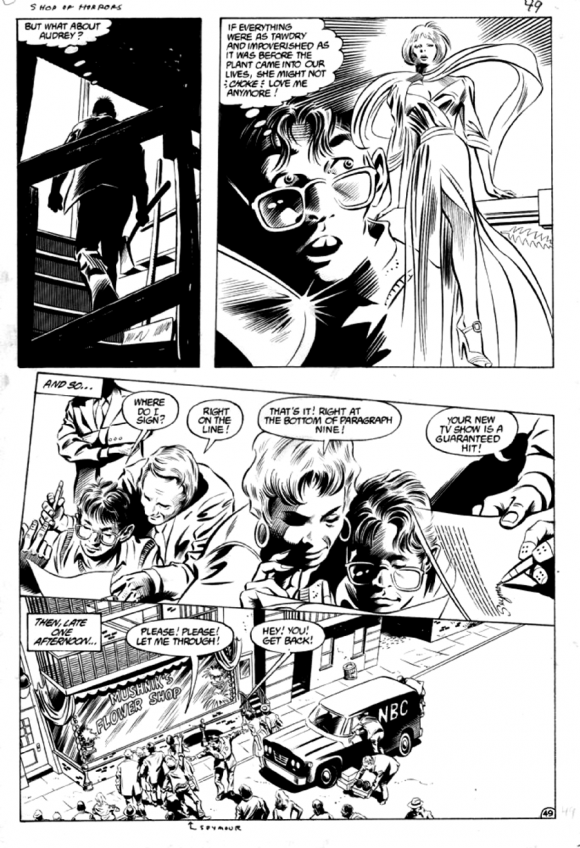 As most readers of comic-book movie adaptations know, there are often big differences between the comic and the movie it is adapting. Creative teams have to work from an unfinished version of the movie—sometimes nothing more than a screenplay—which allows the final film to end up being quite distinct from the published adaptation. So it’s surprising that Little Shop of Horrors the comic book is so faithful, considering the last-minute, drastic overhaul that the movie underwent. 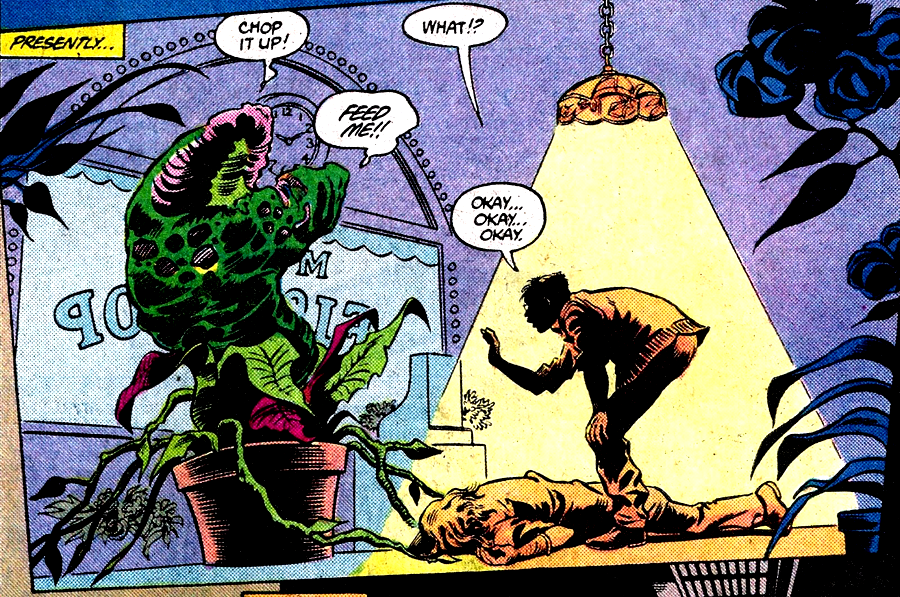 The movie’s original ending—taken from the musical—is one of pure horror. Audrey II mortally injures Audrey, whose dying wish is to be fed to the plant so Seymour can be the big success she always knew he could be(!). He does, becoming so despondent he climbs onto a nearby roof to commit suicide. It’s here that he is approached by the botanical company exec (played this time by Paul Dooley) who makes him the unknowingly apocalyptic offer.

Seymour changes his mind, but instead of killing Audrey II, it is he who ends up dead, agonizingly eaten alive. For good measure, the scene ends with Audrey II spitting out Seymour’s cracked glasses.

It’s from here that the story goes completely bonkers—Audrey II buds are sold all over the country, and in short order they all come alive and start eating everyone in sight. We see armies of Audrey IIs taking over cities, demolishing buildings, even wrapping their green tendrils around the Statue of Liberty. A big “The End?!?” pops onto the screen, which is then pierced by one of the plants as it attempts to eat the very audience watching the movie! The final shot is a zoom into Audrey II’s mouth, and the screen goes black.

Apparently during the first test screening of the film, it worked like gangbusters until the moment Audrey is killed, which then turned the screening room “into an ice box” (Frank Oz’s words). The filmmakers surmised that the downer ending worked just fine on stage because the actors came out on stage at the end for a bow, releasing the tension. No such thing happens in the movie, turning musical black comedy starring everyone’s favorite comedy actors into a grisly dystopian nightmare. The entire 23-minute finale was scrapped and replaced with the happier ending, which test audiences loved. The film was released in December 1986, and was a critical and financial hit. 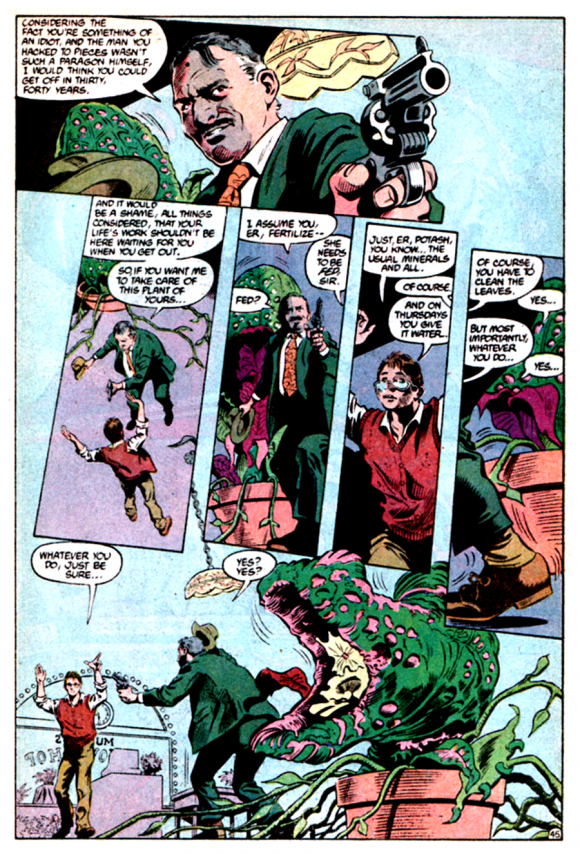 One wonders what the comic-book adaptation would have been like if it had featured that original ending. We all know Gene Colan was exceptional at giant monsters attacking people, so it probably would have really been something to see. For the curious, the original version of the film is available on Blu-ray, known cheekily (if unofficially) as the “Everyone Dies Cut.” While I enjoy seeing this alternate-Earth version, I have to say I prefer the theatrical cut with the happier ending. It feels strange to watch the movie get rid of its main characters so mean-spiritedly, and while the SFX are top-notch, the “everyone dies” ending doesn’t build to a crescendo—it’s just twenty straight minutes of mayhem. 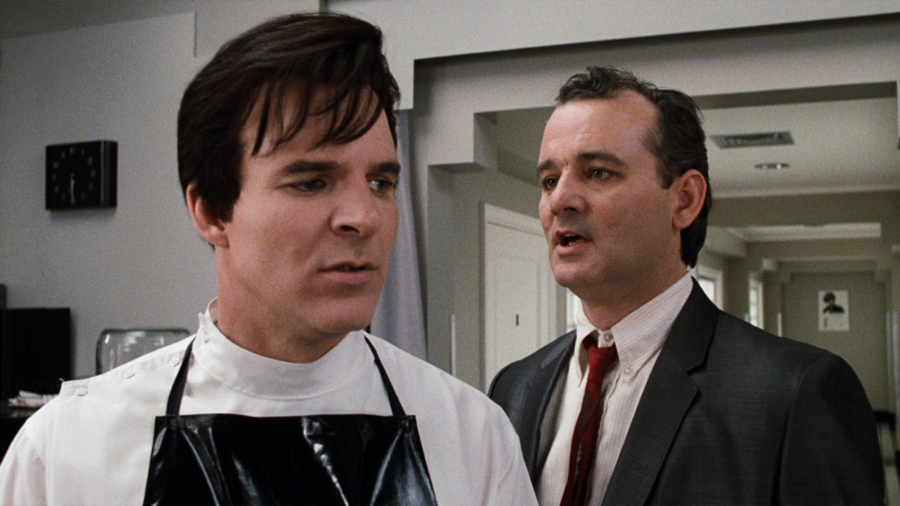 Whatever version you see, Little Shop of Horrors is a lot of fun. It’s beautiful to look at, the musical numbers are catchy and well-staged, and for this fan of SNL and SCTV it’s great seeing Rick Moranis, John Candy (as a wacky DJ), Christopher Guest, Steve Martin, Bill Murray (who came out of a self-imposed four-year exile from Hollywood to do a cameo as a masochistic dental patient), and Jim Belushi all in one movie. And even after decades of advancements in movie SFX, the Audrey II remains a great movie monster, fearsome and creepy.

Just watch what you feed it.

Rob Kelly is a writer/artist/comics and film historian. He is the co-host of The Fire and Water Podcast (and the host of its sister show, The Film and Water Podcast), the co-creator and writer of the award-winning webcomic Ace Kilroy, and the creator of the book Hey Kids, Comics!: True-Life Tales From the Spinner Rack. It’s professionalism that he respects.