NEAL ADAMS Loved — and Lived for — Comics, by PAUL KUPPERBERG

The celebrated Mr. K. honors a colleague and comics giant… 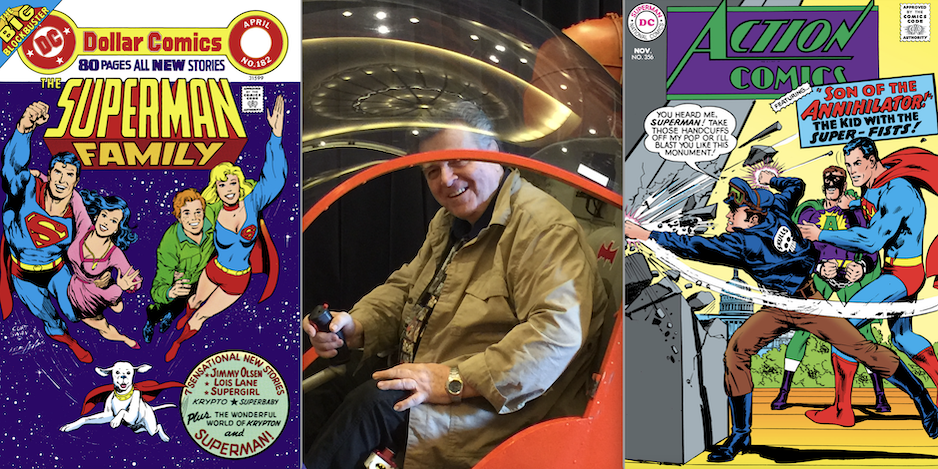 When I got the phone call, my first thought was, “You can’t kill off Neal Adams! He’s integral to the plot!”

Neal Adams (June 15, 1941 – April 28, 2022) became a part of the comic book story in 1967 (after the 26-year-old’s earlier stints in advertising and as the artist of the syndicated Ben Casey newspaper strip from 1962-66) with some stories for Jim Warren’s black-and-white horror comics and his first work for DC in Our Army at War and with stories and covers for The Adventures of Jerry Lewis and The Adventures of Bob Hope, before editor Mort Weisinger assigned him his first superhero work, the cover of Action Comics #356 (Nov. 1967).

There are very few comics from those days I can vividly recall the details of purchasing, but Action #356 is one of them. My father pulled up outside the candy store/soda fountain on the corner of Seaview Avenue and Rockaway Parkway in Brooklyn and sent me in to buy him a pack of Camels (it was the ’60s, OK?). 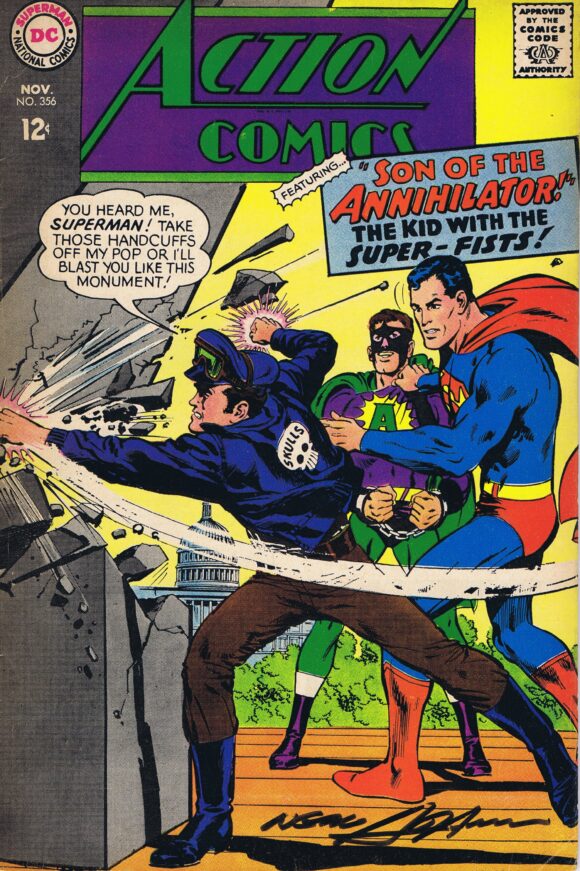 While I was waiting to pay, I glanced at the newsstand and my eye fell immediately on the cover for “The Son of the Annihilator.” It wasn’t the situation depicted that caught my attention—I could easily imagine Curt Swan or Wayne Boring, who illustrated the issue’s interior, drawing the exact same image—but the drawing itself, done in a style unlike anything 13-year-old me had ever seen before. It was art that lived in the same world as Curt Swan’s realistic style, tipping toward photorealism.

What followed that introduction was as breathtaking as it was groundbreaking. It was hard to hand an artist of Neal’s caliber a breezy, lighthearted story; despite the stylized cartooning he was capable of on a strip like Jerry Lewis, his talents were best used on serious stories, dark stories. Stories about people, not plotting. You know the list: The Brave and the Bold. Batman. Detective Comics. Green Lantern/Green Arrow. Deadman. The Avengers. Countless stories, even more covers. Advertising. Book covers. He even designed the sets and costumes for a Broadway play, Organic Theater’s Warp! He was everywhere, helping to revolutionize comic book art in the 1960s and the comic book business in the years that followed. 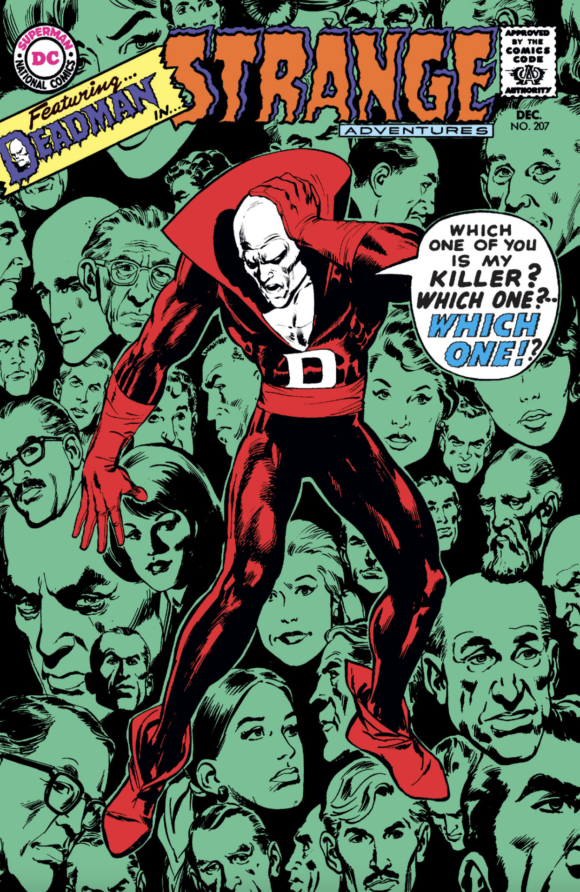 Neal influenced and mentored more up and coming artists than I ever imagined; Facebook and Twitter are full of memorials by professionals with stories of how their encounters with Neal changed their lives and their work. He may not have always delivered his criticisms in the politest of terms, but it was always from the heart and with the goal of making them better artists.

Neal was a staunch believer and defender of creator’s rights. He was the mouth-that-roared of the band of professionals who sought, and won, credit and compensation for Superman creators Jerry Siegel and Joe Shuster. He was one of the leading voices demanding the return of original art and the payment of royalties to all creators. 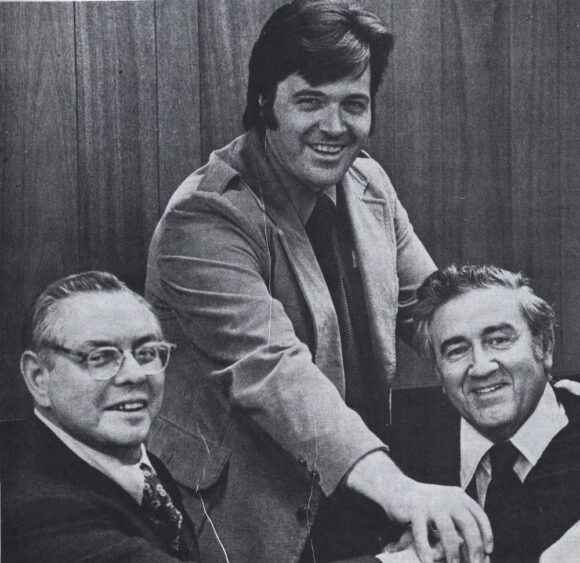 As late as 2017, when I saw him at TerrifiCon, he admonished me for having a “tip jar” on my table for fans to use when I signed their books. “Artists don’t get tipped,” he said, sneering on the word. “They get paid!” With my tail between my legs, I trudged back to my table and tossed the tip jar.

I’ve known Neal since I was a kid, running into him at early cons and through my brother Alan’s time working at Neal’s Continuity Associates studios. Neal and Alan—neither of whom ever met a grudge they couldn’t hold on to—later had a falling out; as a result as late as 2006, he would sometimes call me “the not-evil Kupperberg brother.”

I don’t even remember the first time we met, but it was likely at one of Phil Seuling’s New York Comic Art Conventions. The first time I ever saw him was when I took a 1968 tour of DC’s offices and Neal was sitting at a drawing board, making corrections on a Superman cover as we passed through the production department. 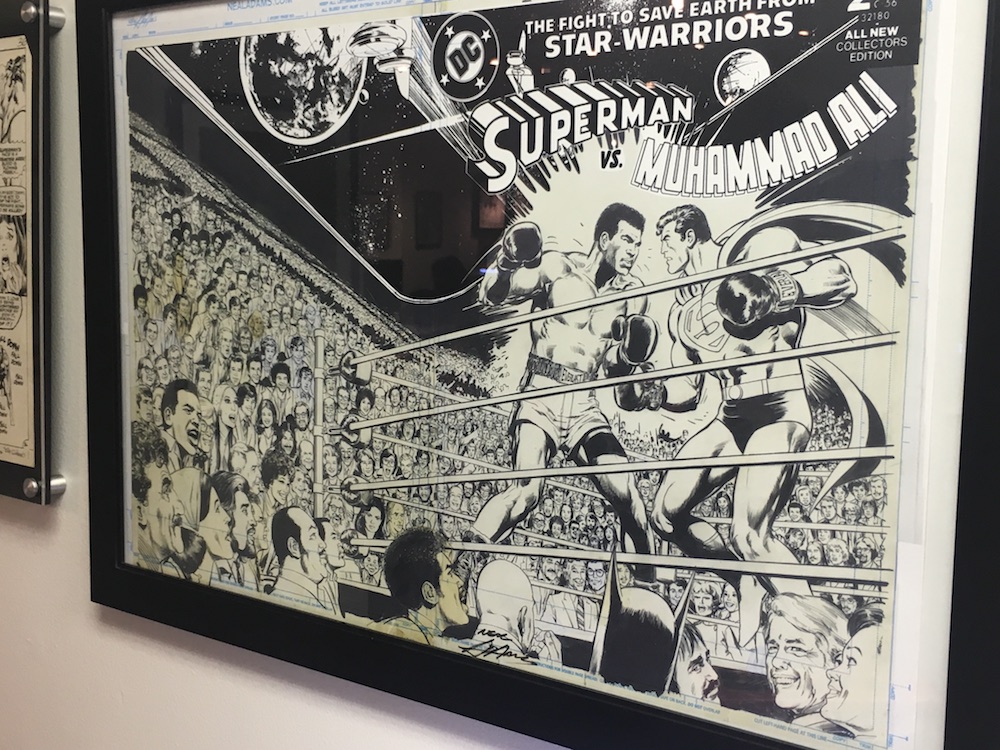 Several years later, in 1977 or ’78, after I had joined the ranks of pros working for DC, I was up in the offices at 75 Rock when Neal came charging out of an office, portfolio in one hand and a Polaroid camera hanging around his neck and rushed past me with a brief nod. He abruptly stopped and turned back to me. “Did I photograph you yet?” he demanded.

“Were you supposed to?” I had no idea what he was taking about.

“Yes. Shut up and stand against the wall.”

So, because Neal Adams told me to, I shut up, stood against the wall, and he took my picture with the Polaroid, sprinting off before the photo even finished popping out of the camera.

Months later, I found my “portrait” by Neal Adams as one of the spectators on the famous wraparound cover for the Superman vs. Muhammad Ali tabloid. 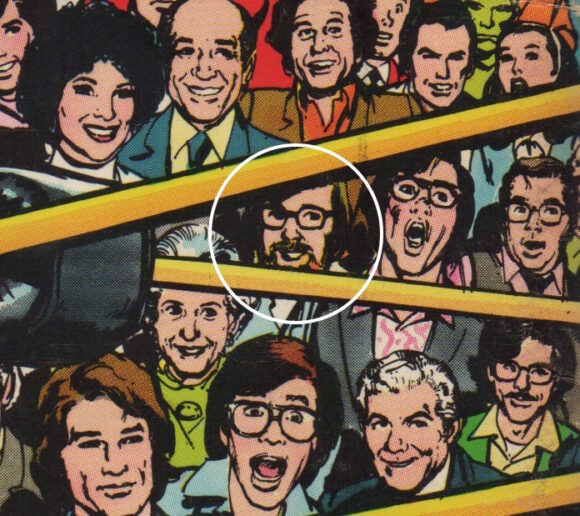 I never got to work with Neal, either as a writer or editor, although many of my stories appeared in titles under an Adams cover, including in the Dollar Comics days of House of Mystery and Superman Family (including #182, which featured my very first story written for DC). But it was always a pleasure to run into him at conventions, Neal the king of the sales floor with the biggest set-up of the show, and catch up. That is, if I could squeeze in past the line waiting for him to sketch or sign something or just to say hello, because Neal didn’t just scribble an autograph and move you on, he talked to his fans, spending time with even those who were there just to express their appreciation or shake his hand. 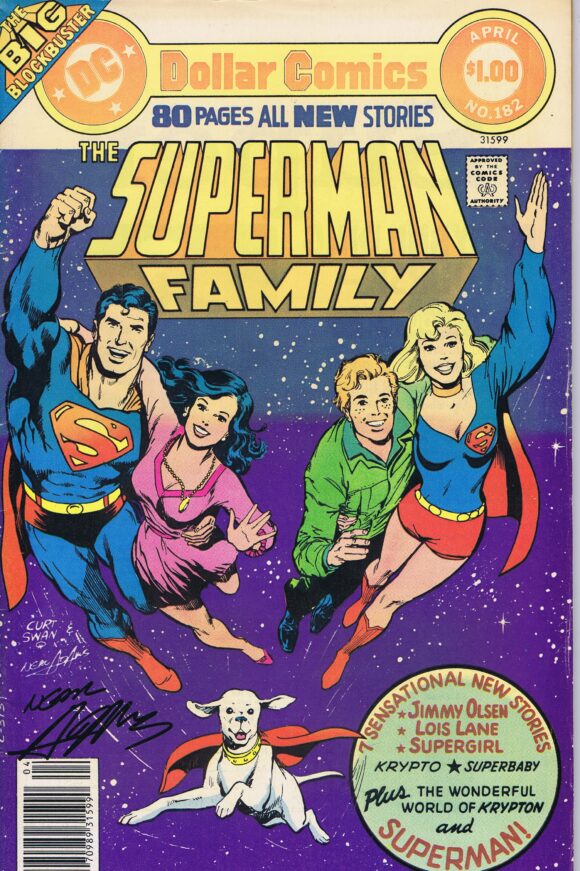 I once asked Neal how he found the time to hit all these conventions and still run a business. Did he just forego sleep altogether? “No, but I can nap anywhere.” Proof, caught by me at LaGuardia Airport while waiting to board our flight to Kansas City for the 2014 Planet Comicon.

Neal Adams was a force of nature, simultaneously an irresistible force and immovable object. And he was indeed integral to the story of comic books and will continue to be as long as each new generation discovers his work and learns the lessons it had to teach them.

I had originally planned to do a “13 Favorite Neal Adams” something or other but decided it would be impossible to choose only 13 pieces by a man whose every job is a favorite. But you’ll find plenty of homage posts on the web filled with his art. Instead, I’ll just end with this: 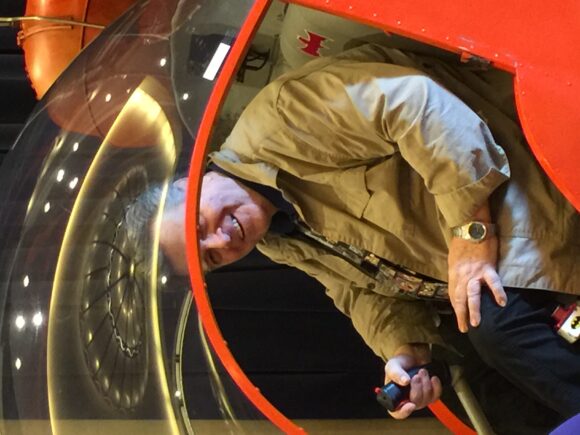 Also at the 2017 TerrifiCon, the original Batcopter was on display by its current owner who was urging anyone who ever had anything to do with Batman to sign the interior. My table was directly across from the Batcopter so I got to watch a small parade of professionals sign, then pose with and in the chopper. You bet your Bat-ass I was one of them! Another one was Neal, a 75-year-old-man who sat in that bird, his hand on the stick, grinning like an awed 5-year-old for the camera. After more than 50 years making them, you could tell that Neal Adams still loved comic books. 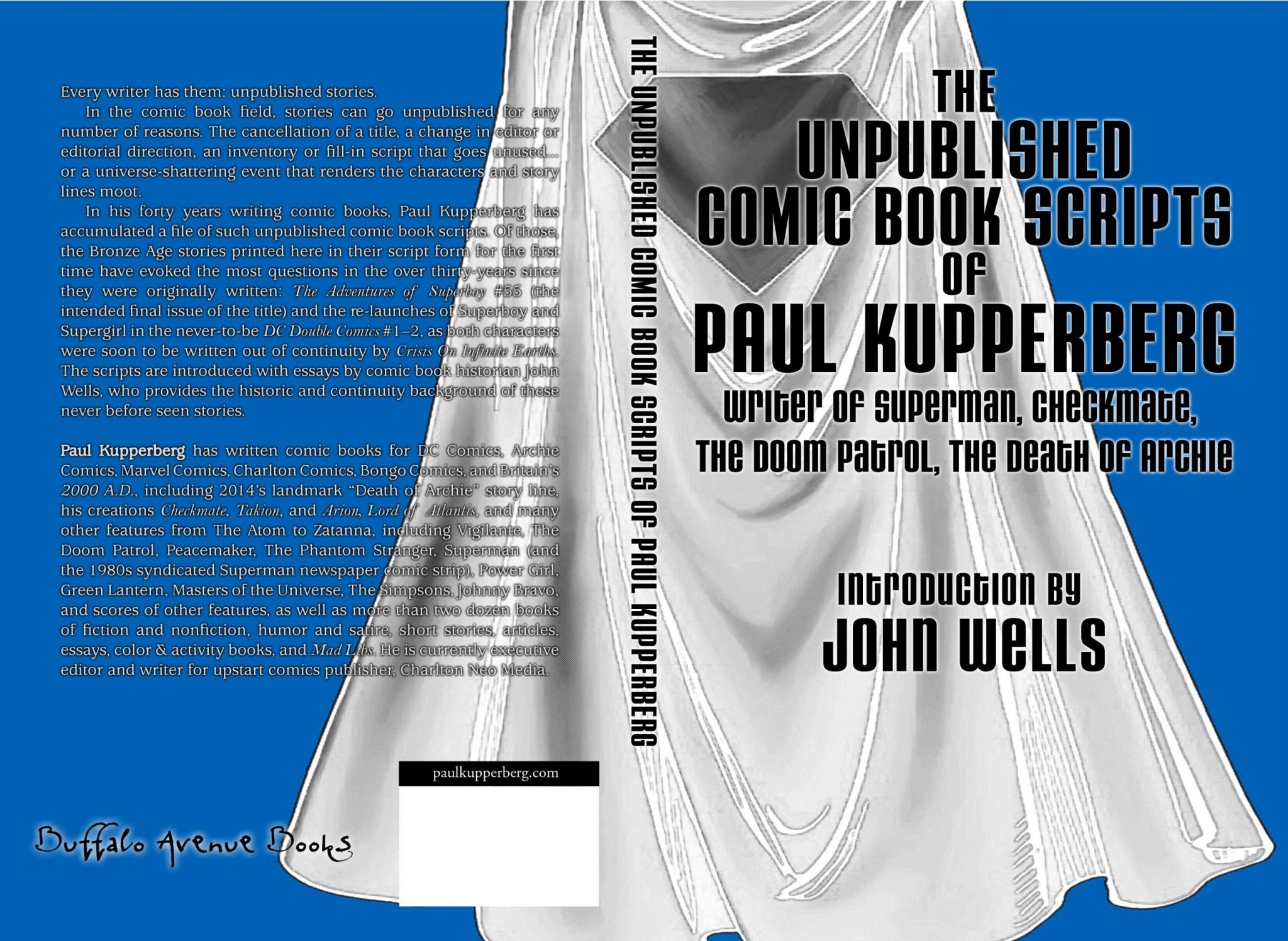