Artist Darick Robertson of Transmetropolitan, The Boys, and Butcher, Baker, Candlestick Maker joins the punk rock Occupy Comics crew at Black Mask Studios for his talking-gun tale in Ballistic. This week also sees the deluxe hardcover release of Happy! from Image Comics, a hard-boiled Christmas story about an imaginary horse friend, written by Grant Morrison. Darick joins us today for the Mighty Q&A. 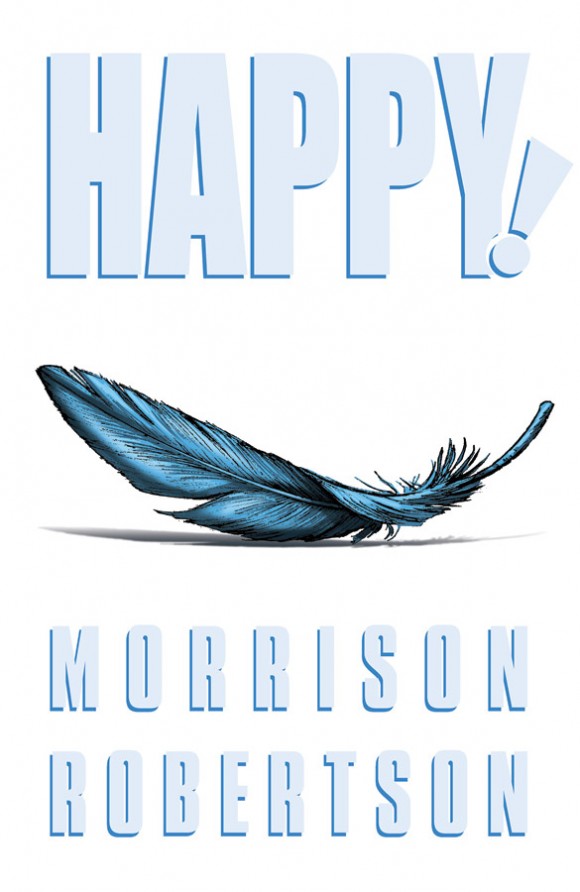 Clay N. Ferno: Hi Darick! We’re just though with reading Ballistic #3 from you and Adam Egypt Mortimer. As bonus fodder there are some script notes in the back about odd science and weird history. Are you at home working in this hyper-future? Butch and Spider might be related somehow, right?

Darick Robertson: Well, world building is something I’m familiar with, but Spider and Butch wouldn’t really exist together. Transmetropolitan is a future where the world we live in now just kept expanding and expanding, and we built upon and into what exists to maintain an ever-growing population and city life. Butch inhabits a world where it’s utopia by technology. The West as we know it is a crumbled, environmentally destroyed memory and the entire truly surviving civilization is inhabiting a continent born of bio-formed trash and manipulated DNA that rests upon terraformed rock, twice the size of Texas. Where Spider Jerusalem’s Government was ridiculous, it was still a government. Repo City State is run by a cabal of glorified gangsters. 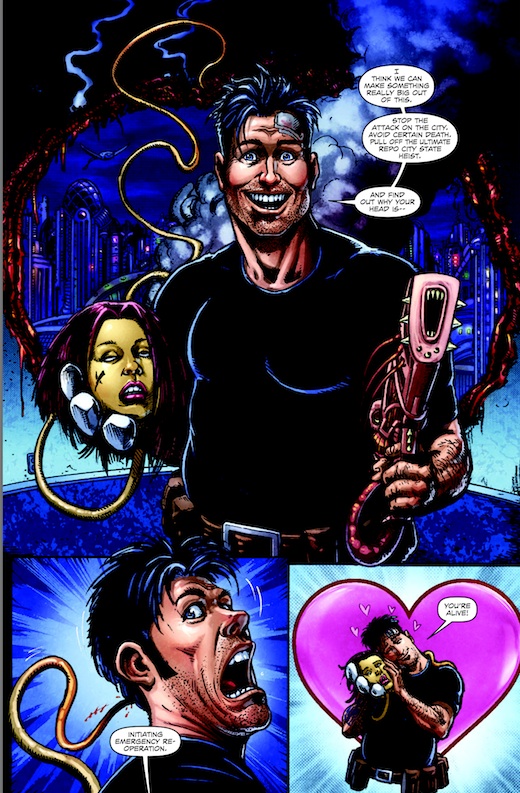 How did you hook up with Adam and Black Mask Studios?

Adam and I are old friends, going back to the early 2000s when we both lived in New York and he was developing animated shows for MTV. We’d met at SDCC, and developed a friendship. He had the idea for Ballistic about the time I was launching The Boys at Wildstorm and we’ve spent the last few years looking for the right circumstance and publisher.

I was keen on Image Comics, but Adam introduced me to Matt Pizzolo and Matt was just getting Black Mask off the ground. Being that Adam has a long-standing relationship with Matt and that Steve Niles and Brett Gurewitz were both involved, I was persuaded to launch Ballistic through Black Mask. 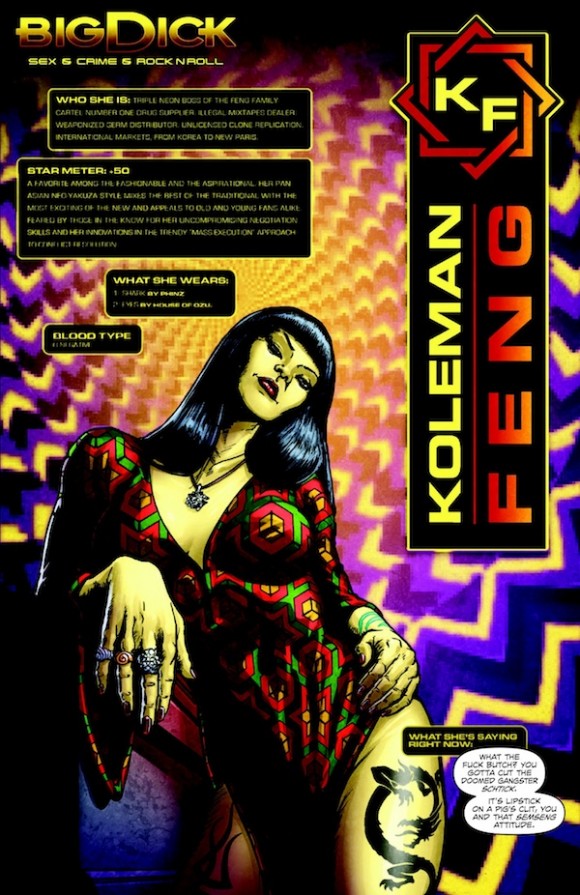 If you could have one of your comic-making tools be alive and able to talk, what would it be and would you feed its crippling drug addiction?

Oh, what would I love to have? I would say a Maker and yes I would feed it drugs, because I suspect I could get it to produce its own drugs to feed it with (problem solved). If not that, I’d want Butch’s Bat Wing car.

Where is the worst place you can find yourself waking up in Repo City State?

Your double-page spreads in these issues are colorful and amazing but it looks dangerous!

It’s dangerous if you owe the gangsters a lot of money, as Butch does. 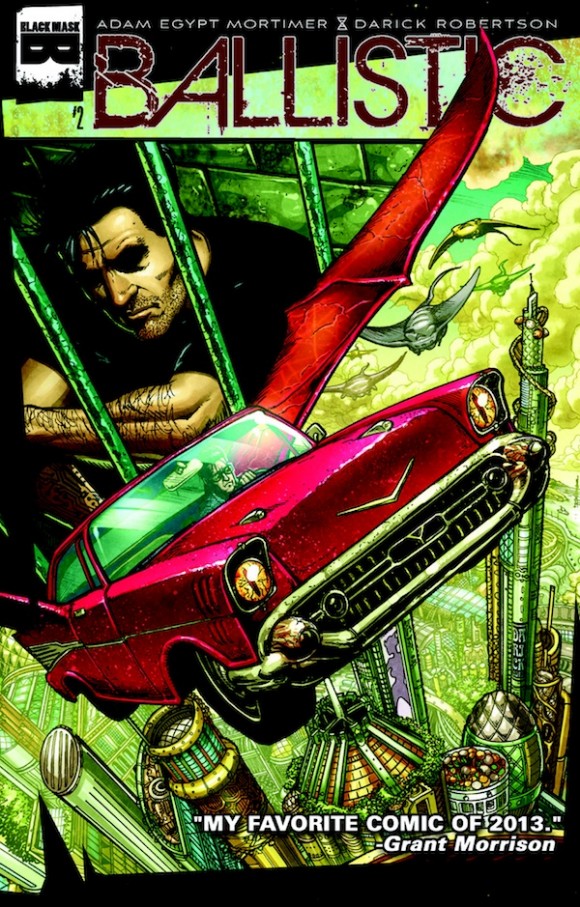 Last year, because I dread the holidays, my advent calendar was your book Happy with Grant Morrison. That’s being released as a collection right as gift-giving times arrive.

That’s right! A hardcover with 10 new pages of story and art, something like a deleted scene, that takes place between chapters 3 & 4, and lots of sketchbook drawings and notes in the back. 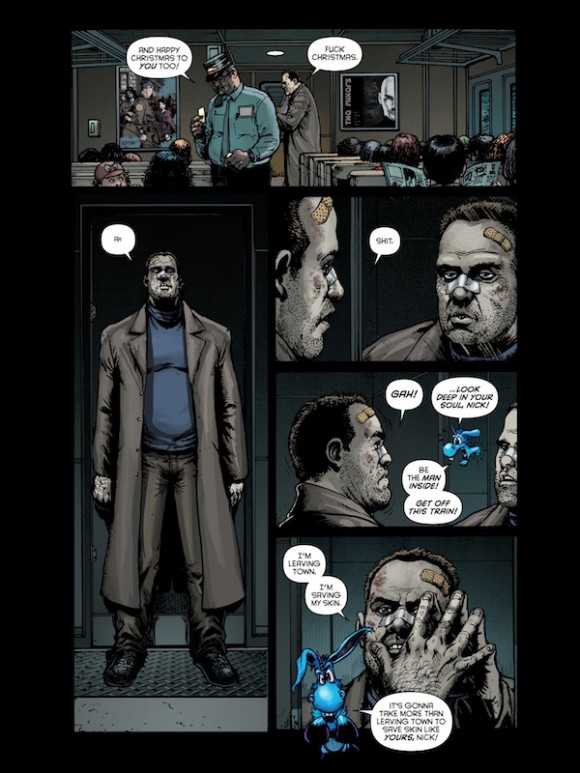 Have you ever been depressed by a gift?

Well, as hokey as it may sound, no. I have been confused by gifts, but never depressed. I always appreciate that someone wanted to give me something and I try to maintain an attitude of gratitude. 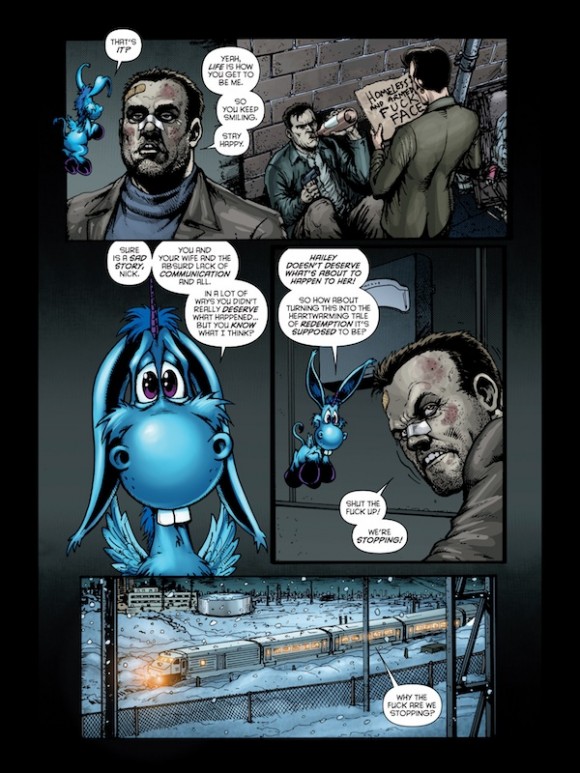 Did you have any imaginary friends as a kid, or in high school or college a hallucination so convincing you thought it was real?

Well, I experienced ghostly contact and have had paranormal experiences in my childhood home. Does that count?

Halloween! (Because it’s not holy.)

My mom always sends me a Flag Day eCard.

I like your Mom’s style. I guess Arbor Day? Plant those trees!

We’re obviously huge fans of yours from The Boys to Transmetropolitan and Butcher, Baker, Candlestick Maker.

After Ballistic finishes up around #5, what is next from you, sir?

I am hard at work on getting “Oliver,” with my friend and co-creator Gary Whitta, ready to launch from Image Comics as well as a long-delayed original mini-series with Christos Gage for DC.

Ballistic took over my schedule with its detailed madness in a way I couldn’t have imagined when we started, but part of the process of creativity is being surprised by the work itself. Adam Egypt Mortimer is full of wonderfully insane ideas and making those insane ideas make sense visually has been a rewarding challenge.

Clay N. Ferno is @ClayNFerno on the Twitter and writes about comics at @DigBoston, @ForcesOfGeek & @LeaguePodcast.