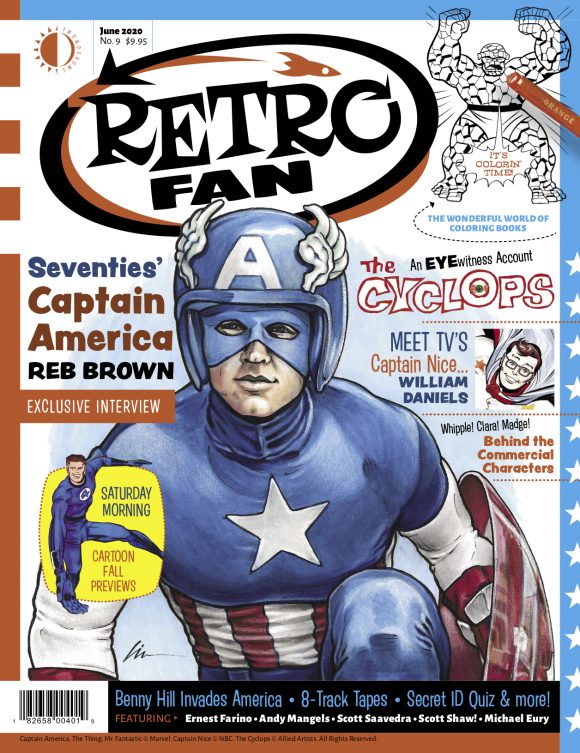 Let’s face it: Chris Evans is to Captain America as Christopher Reeve was to Superman: Each actor so embodied their four-color counterpart that it’s hard to imagine another actor carrying the shield or wearing the cape.

But both Evans and Reeve weren’t the only ones to play their respective roles, obviously. Quite a many actors have played the Man of Steel — most notably the great George Reeves from Adventures of Superman. Captain America, on the other hand, has had far less screen time.

Reb Brown, nevertheless, was a game Steve Rogers in two California-riffic TV movies in the ’70s — and in this EXCLUSIVE EXCERPT from TwoMorrows’ RetroFan #9, editor Michael Eury talks to the erstwhile Sentinel of Liberty about his time as Cap, all that motorcycling and that groovy, see-through shield. 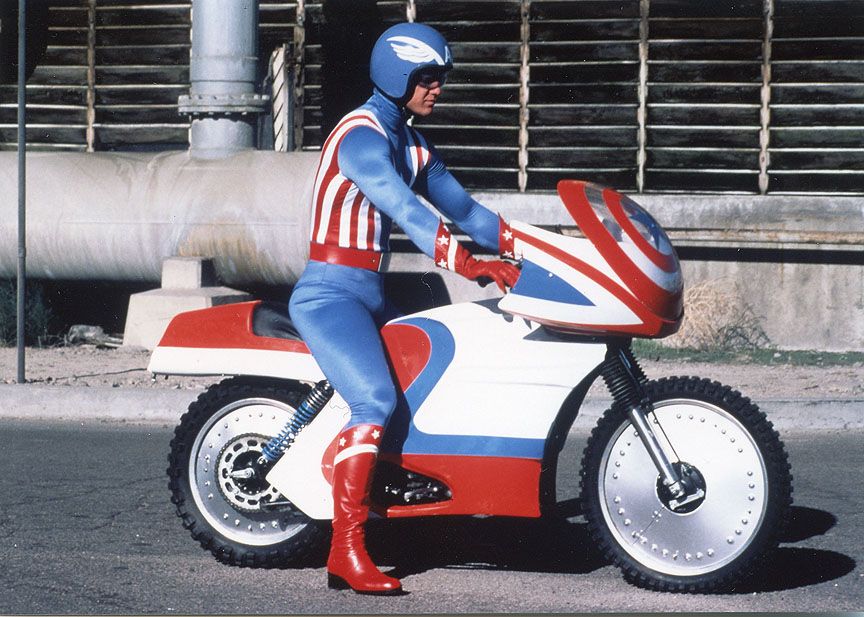 This excerpt only scratches the surface of what Brown and Eury discussed, so I highly recommend getting your hands on the complete issue. The best way to get it during this coronavirus lockdown is directly from TwoMorrows, either in print or digitally. Click here and support one of the best publishers in all of comicdom.

Oh, and want to know what else is in the issue? Dig the table of contents: 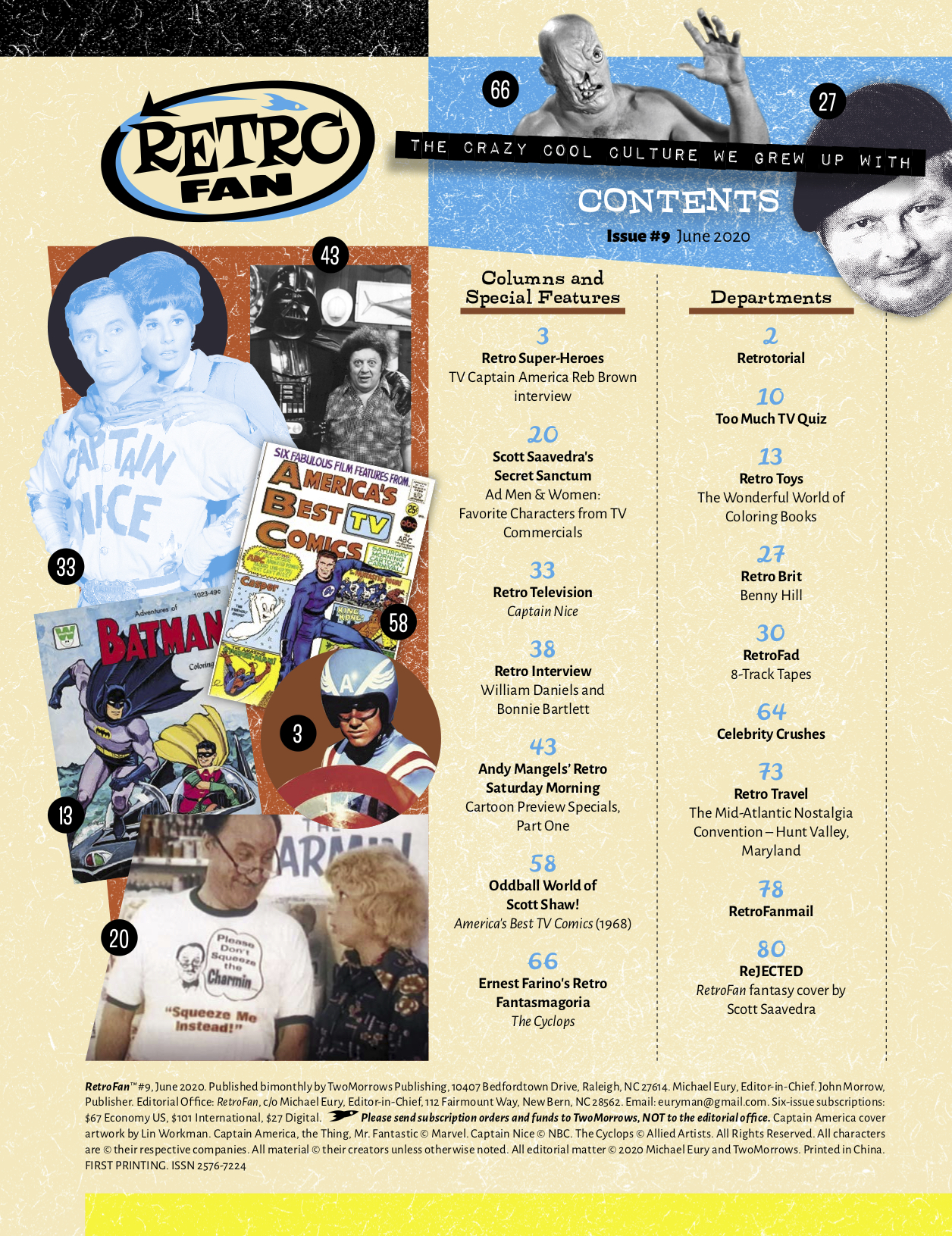 Now here are Brown and Eury:

Michael Eury: You had a lot of guest-starring roles on television before Captain America, but how did you get the part of the Star-Spangled Sentinel?

Reb Brown: I was under contract at Universal at the time, and Monique James was the head of talent and she set up a meeting with Allan Balter, who was the producer of Six Million Dollar Man. We had lunch together and it was like two bears meeting in the woods—we got along. It just seemed to fit. I looked like what they had in mind, and it just seemed to fit.

Eury: You definitely looked the part. You were very fit then, but did you have to go through more training after you got the role?

Brown: No. I’ve been working out since I was 21 years old, my whole life. I was an athlete—I played football, basketball, baseball, I surfed, and was doing heavyweight boxing and martial arts. 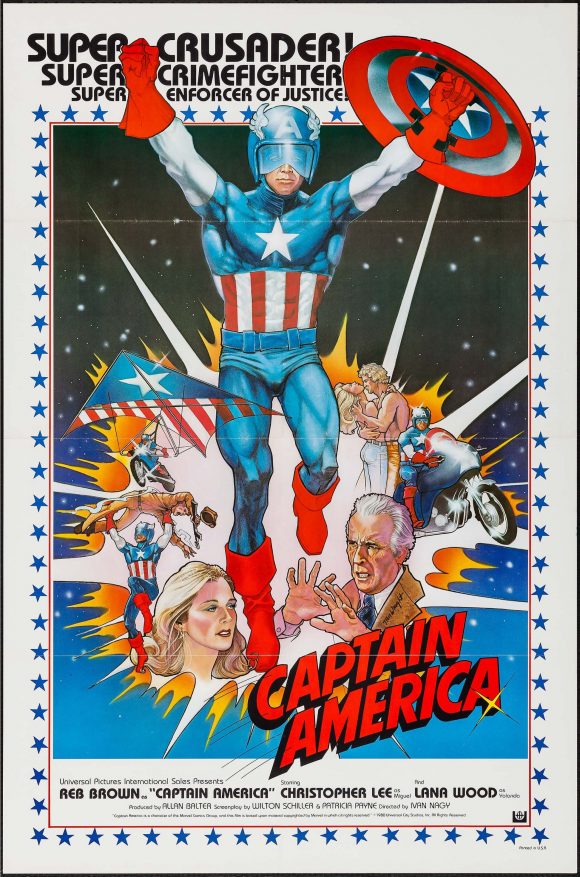 Eury: You were one of the first actors to play a super-hero who had the physical build of a super-hero. Today, Chris Hemsworth as Thor—he bulks up for that, but there was a time a while back, like with Michael Keaton playing Batman, when they built the suit for him. You fit the suit.

Brown: Yeah. There was no CGI for my Captain America!

Eury: How familiar with you with Captain America before you got this role?

Brown: I read the comic book, and there was a cartoon in 1966, where “Captain America throws his mighty shield.”

Eury: I love it! [Sings] “When Captain America throws his mighty shield!” [Laughter] The theme is probably better known than the cartoon itself.

Brown: I really enjoyed watching it and connected with it. It really was important for me. One question people ask me is, “How do you feel about the character, Captain America?” The one thing I feel is, it is pure. There is nothing going on behind the scenes—no hidden agendas. He just wants to do good for the American people. In essence, he is taking care of business the best way he possibly can.

Eury: That is a strength, if not the strength, of the character. Captain America goes well beyond the red, white, and blue costume. He is unwavering in his convictions.

Brown: So many other heroes have a hidden agenda—there’s always something going on and there’s something dark there. There’s nothing dark here, with Captain America—it’s just pure. It’s about doing good and being the one who is going to help. That’s the whole goal.

Eury: We need some Captain Americas in the real world right now, don’t we?

Eury: One thing that stands out with your Cap was the motorcycling. But that wasn’t the first time you were on a bike, right? You had some experience with riding…

Brown: Yes, I did. I had done a Honda commercial early on and was on CHiPs, in three episodes. Before you got to ride a motorcycle in CHiPs, you had to go with the highway patrol, and they taught you how to ride to look like you knew what you were doing. I enjoyed it a lot, but don’t ride anymore because of the way people are today. That way they are driving is too dangerous. But I enjoyed it at the time.

Eury: There were a lot of stunts in your two Captain America movies. I’m assuming you had a stunt double, but I know you did some of them yourself. How much of the stunt work did you actually do?

Brown: I did stuff that wasn’t like riding along a wall! [Laughs] Gary Davis was one of the stunt people, and Al Wyatt (Allan Wyatt Jr.)—he passed away some years ago. He was a wonderful guy, too. And they had Mic Rodgers, who also doubled Mel Gibson. I had some good people doubling. You talk about something happening when you’re filming… in the first one (Captain America), there’s a thing where I come off the motorcycle and jump onto a helicopter. They had the ramp all set up and the airbag and everything and it looked really good. I jumped off the ramp onto the helicopter skid and I looked down. When I looked down, because of the rotors on the helicopter, the airbag deflated!

Brown: Needless to say, I squeezed the blood out of that thing. 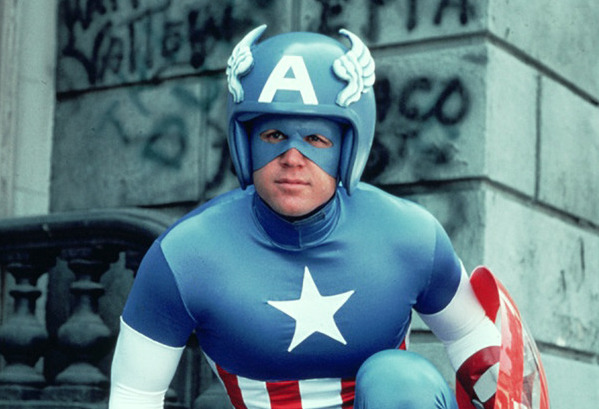 Eury: What about the iconic Captain America shield? You could see through it, with its red and clear stripes instead of the traditional red and white stripes. What was it made of, and how much did it weigh?

Brown: It was a very heavy plastic, and the reason it was see through was because the highway patrol would not allow something you couldn’t see through (when driving). You had to have a shield you could see through so you could be able to see everything going on.

Eury: The shield doubled as a windshield.

Brown: We had the helmet, too. The cowl is normally what Captain America wears, but we had to have the helmet for that same reason.

Eury: I understand you carry a replica of your Captain America shield with you to personal appearances. How do you get it onto an airplane?

Brown: My wife and I pack it up with bubble wrap, and it gets checked onto the plane.

RetroFan #9 may be available in comics shops at some point but you can order it now directly through TwoMorrows. Click here.