EXCLUSIVE: The Tale of Dean Haspiel’s Variant Cover for SCHMUCK

Seth Kushner is back in the 13th Dimension — with an exclusive piece on how hotshot artist Dean Haspiel created the variant cover for his new Kickstarter project, which launched today! 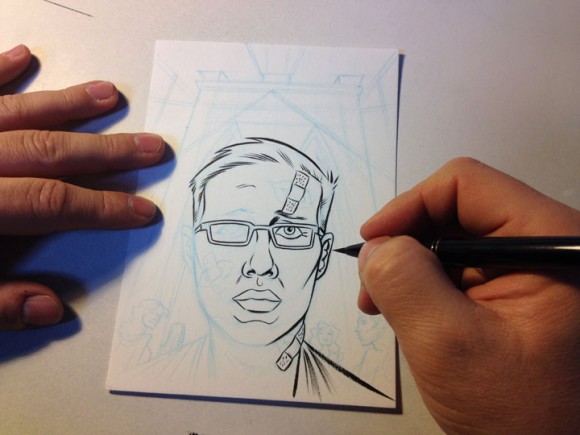 It was last week, very late into prepping my Kickstarter launch for “Schmuck,” when it occurred to me I really needed cover art for the exclusive edition. The notion of a “special” cover was first brought up to me by comicsmaking machine and Kickstarter vet, Jimmy Palmiotti. “Ya gotta get a ‘name’ to do your exclusive cover,” Jimmy advised me.

I thought about it for a while. I wanted an artist with a “name” but also someone who hadn’t already contributed to the book. Of course, I also wanted someone whose style would be right. I pondered who that perfect artist would be for so long, I was now only days before my scheduled launch. Who could I get last minute, who’d also make a great cover?

The answer was under my nose in the form of my good buddy and studio-mate Dean Haspiel. He surely meets the criteria of being a “name,” especially with all the acclaim he’s been getting for his excellent art on Archie Comics/Red Circle’s The Fox. He’d do a great job, of course, but I didn’t initially think of him because he already provided art for the book. But I realized he was my guy.

I brought it up to him at our studio, Hang Dai, when he arrived on Wednesday. He immediately agreed and began brainstorming ideas. We both knew I needed something simple and iconic. Dean’s first thought was something involving my main character, Adam (based upon me) with hearts on his face covered with bandaids, to represent his being “wounded by love.” He quickly amended his idea to be lips instead of hearts. It was a clever and iconic idea and I was excited.

Dean quickly began sketching and took the idea further to include the Brooklyn Bridge in the background (to represent the story’s NYC/Brooklyn setting) and added a few women walking by and ignoring Adam. 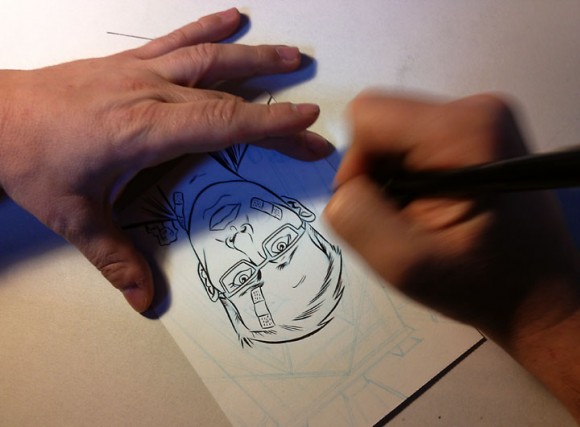 Soon, Dean had a finished the drawing which he then scanned, and added some shading and colored the lipstick marks in Photoshop. I had long since left the studio by then, but he emailed me the final version later that night and it was perfection.

In my opinion, Dean knocked it out of the park and gave me an amazing cover for my book. 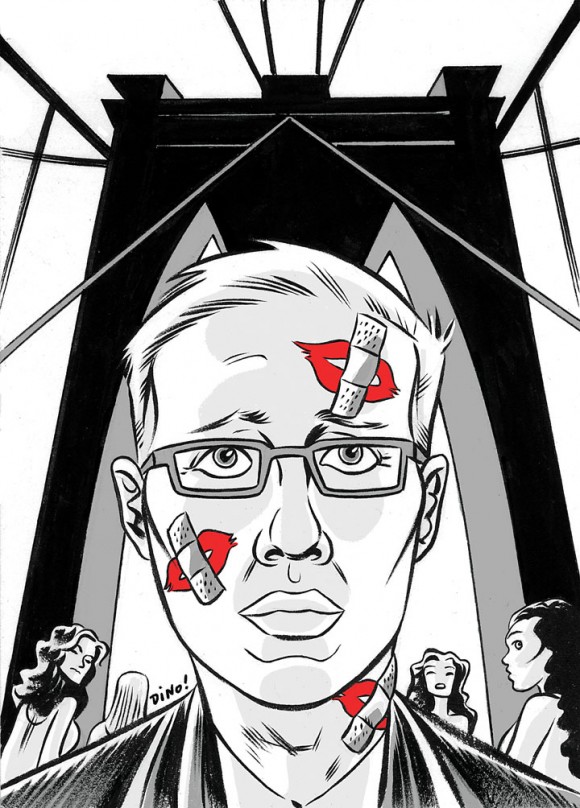 Seth Kushner is an award-winning photographer and a writer whose published books include “Leaping Tall Buildings: The Origins of American Comics” (2012, co-authored with Christopher Irving), “The Brooklynites” (2007, co-authored with Anthony LaSala) and the self-published fumetti anthology Force Field Fotocomix Vol. 01.