IDW is publishing the Silver Age Batman newspaper strips starting this year. So it only made sense that for BATMAN ’66 WEEK, we give you an EXCLUSIVE look at some of the art both before it was restored — and after! 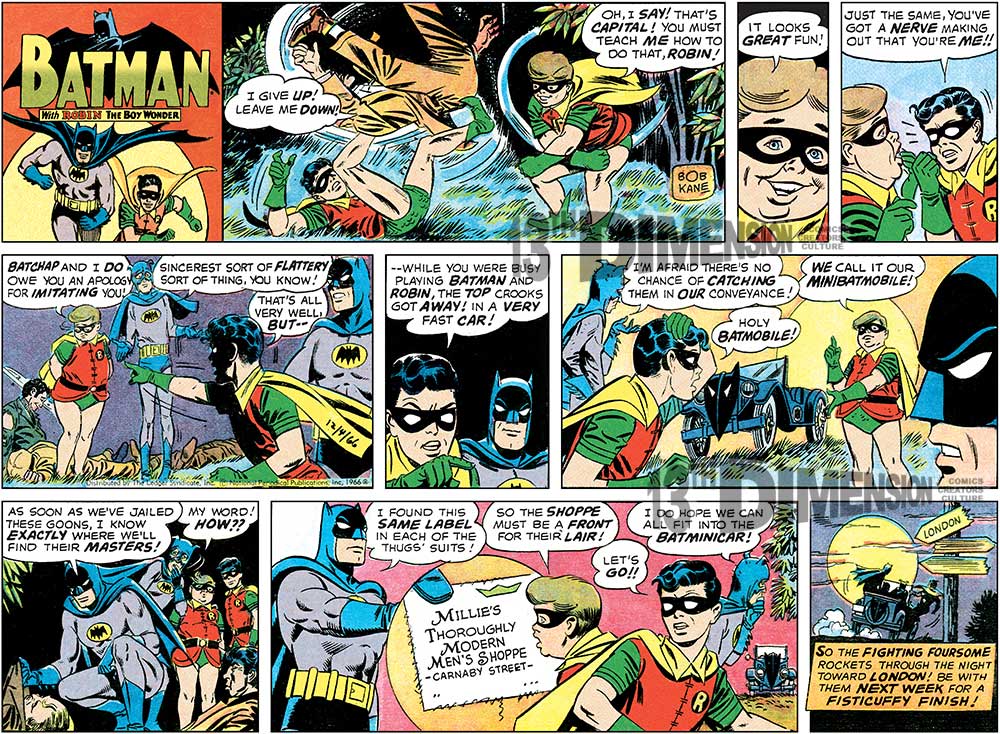 The project — “Batman: The Silver Age Newspaper Comics” — is being headed up by Dean Mullaney of the Library of American Comics, with a big hand from Bat-expert Joe Desris, who’s also writing the intro. The three-volume series has the blessing of DC and follows the Golden Age strips that were collected by Kitchen Sink Press about 20 years ago. These strips were the work of comics legends — such as Whitney Ellsworth, who wrote them, and Carmine Infantino, Joe Giella and Shelly Moldoff, who were among the artists.

Mullaney and Desris gave 13th Dimension the complete rundown from inside their metaphorical Batcave, so check out this Q&A, accompanied by art unseen by fans for nearly 50 years, plus a rough sketch of the cover by Pete Poplaski. 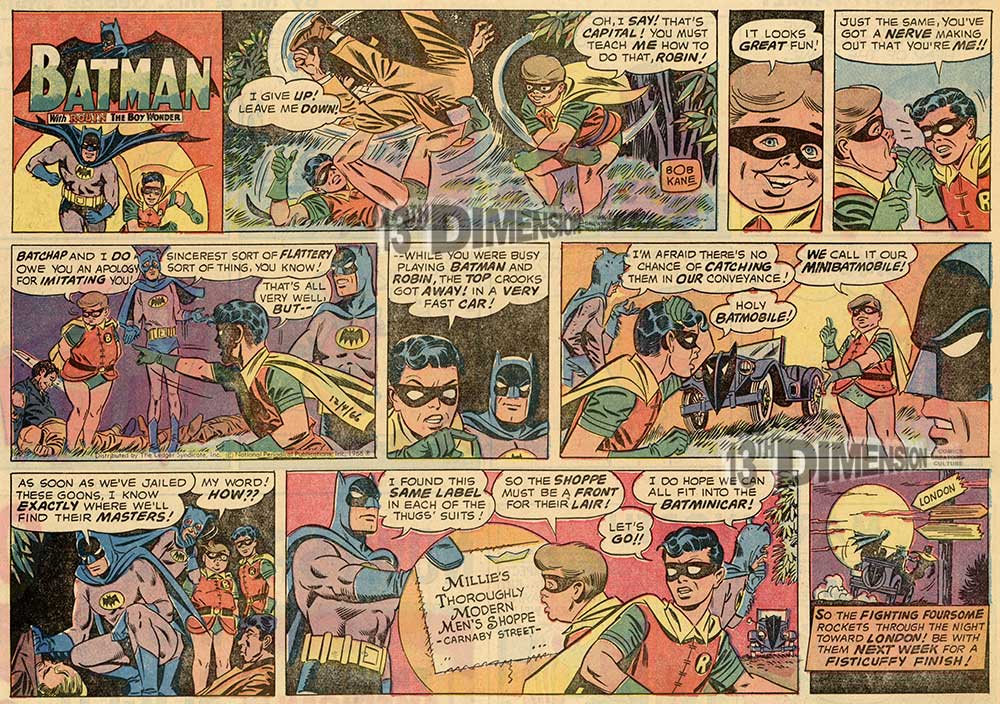 Were either of you surprised that, all things considered, this hasn’t been done until now?

Joe Desris: When I wrote the history of the 1940s Batman strip for Kitchen Sink Press, it seemed logical that reprints of the ’60s Batman strip would follow shortly thereafter. I assembled a photocopied set of the strip to use during interviews; it was mostly from my collection but I had borrowed some material to copy, and even after all that, it still was incomplete (largely as a four-month gap in 1971).

Anticipating a potential book later in 1992 or early 1993, I did interviews with (artists) (Carmine) Infantino, (Joe) Giella and (Al) Plastino in February 1992 while I was in New York for Toy Fair; spoke with (artist Shelly) Moldoff at his home in Florida in October 1992.

Back then, only 26 years had elapsed since the strip began in 1966 and I think DC and Kitchen Sink eventually decided it was wiser to go forward with reprinting the Superman newspaper strip, which was older, having started in 1939.

Frank Miller’s “Dark Knight” and the first two Michael Keaton Batman movies were new/recent in 1993 as well, and since the early portions of the 1960s strip were very unlike a darker Batman, a reprint of the strip at that point may not have sold that well anyway. 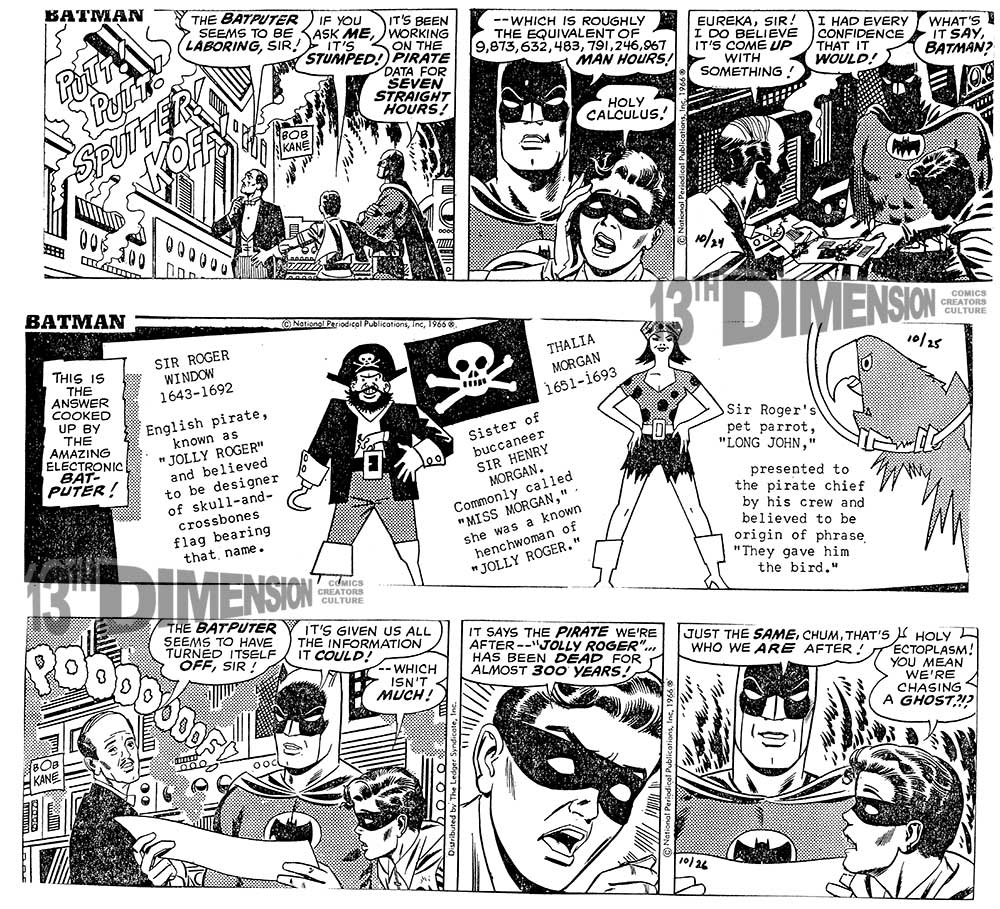 I did some follow up interviews regarding the ’60s strip with those four gentlemen mentioned above, and a few others, in 1993 and 1994, and it was fortunate I did so; the only person still around today is Joe Giella.

Reprinting this strip was inevitable, and I think with DC now more actively licensing the 1960s TV show, that assured someone would do so.

But it is important to understand that this series is substantially more complex than most reprint projects, and that may have proved to be an impediment in the past. DC’s Archive editions and reprints have used readily available comic books, or when available, proofs they had on hand. The Peanuts reprints (from Fantagraphics) had proofs from the syndicate and the artist’s estate to work with.

But after decades of collecting and following Batman, I don’t know of, and have never met, any collector with a complete run of all the Sundays and dailies for this strip. DC doesn’t have them all, the artists didn’t have them all and the syndicate no longer exists.

It seems to me that it is a very BIG DEAL to be assembling and reprinting this strip. There was no one-stop shopping here. 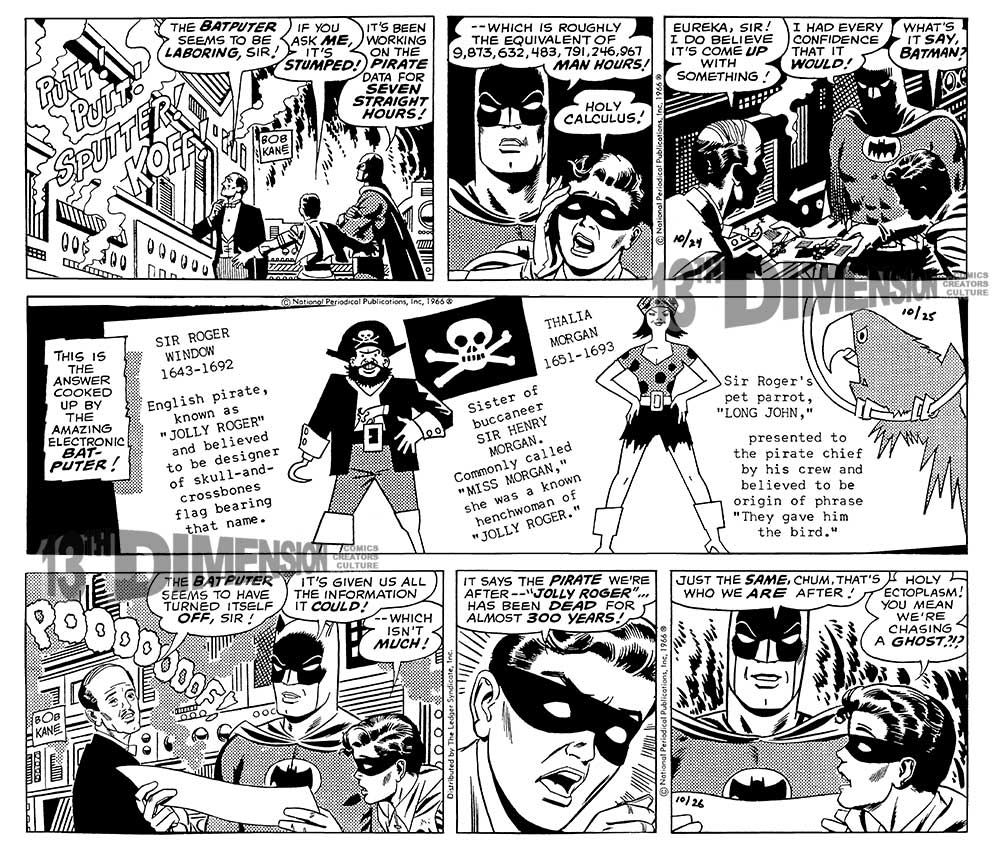 Tell me about how this was pulled all together.

Desris: … Most recently for me, it involved sending clipped strips, proofs, photocopies of art and similar things from my collection to Dean and his crew for scanning, transcribing my taped interviews, and getting in touch with a few collectors I knew who had missing strips or some nice promotional material.

(I) also had more conversations with Giella. I called him one evening to check on a few things and we spoke for two hours! One of the coolest things in this book, I think, is a large promotional brochure that Ledger Syndicate used to sell the strip. Hard to believe it is the only example, but have not encountered another. Bought it on eBay in 2011. It was published so early, that it uses artwork from the first three weeks of dailies before they were modified. All 18 of those dailies will be reprinted in their original state somewhere in this series, with half of them appearing in Vol. 1.

These strips came on the heels of the TV show, so I’d imagine there’s some of the campiness of the era. Or at least a certain amount of goofiness. What’s the weirdest thing that fans can look forward to?

Desris: Lots of alliteration. However there are some important aspects, which are addressed in the introduction and history. For example, Vol. 1 has the third appearance of Poison Ivy, following her initial stories in Batman 181 and 183. Her “real” name is also used for the first time in the strip. Ivy’s fourth appearance came in Batman 208, which was reprints, but her fifth appearance comes in Vol. 3 of this series, something I suspect most fans have never seen. 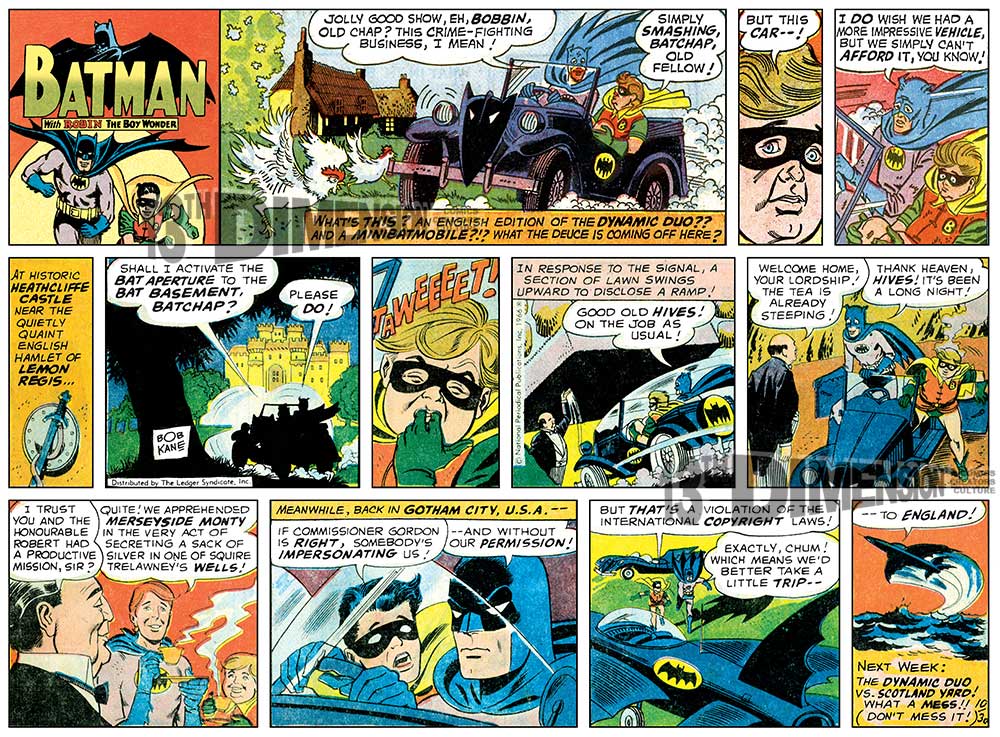 Half-page strip, restored. Other versions below. Batman ™ and © 2014 DC Comics.

I know the point was to reprint these as originally published. Was there any temptation to color them?

Desris: Coloring daily strips is more of a recent development, made possible due to computer technology.

Knowing that the strip would appear in black and white, it was drawn on Craftint board (Moldoff used Zip-a-tone during the first few months), and so coloring it, whether back then or today, would result in some unusual looking art, with color on top of those Craftint dots.

The strip was never intended to be in color and so the artists did not make considerations or allowances for color when drawing the strip.

I did run across a newspaper article from one paper claiming that their dailies would be in color. Never found any examples, and suspect it was due to a preliminary and incorrect understanding of the Sundays being in color and dailies in black and white.

HOWEVER! The weekly comic book “Smash!” (published in England during the 1960s), did carry the strip on its front cover (in color) and inside front cover (black and white). So a few daily sequences did appear in color, and hopefully those Smash covers can be reprinted in either Vol. 2 or 3. 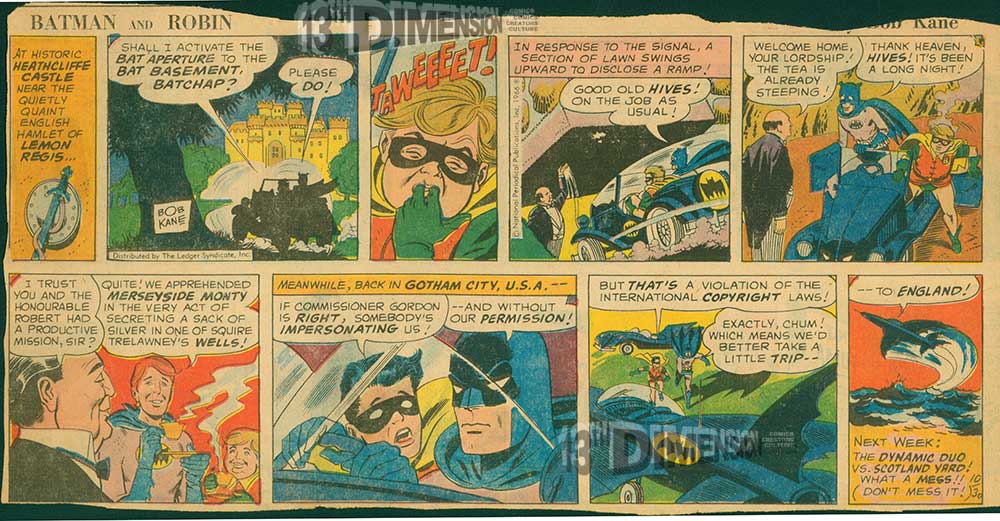 Is anything missing from the project or do you have the full run?

Mullaney: If any of your readers have these strips, we would like to upgrade our source material:

As you’re probably aware, the Sundays came in three formats: tabloid, third page, and the half page. The half is the only “complete” version. The tabs are close — missing only the “throwaway” slice panel at the top right. The thirds contain the bottom two tiers and are missing the entire top tier.

Putting together a complete set in the half page format has been a major challenge, particularly for a strip that’s this “recent” (as compared to 1928 Polly and Her Pals!). Joe … is not only writing the introduction to the book, but has been a major help in gathering strips to make this series the complete, definitive edition we all want it to be. 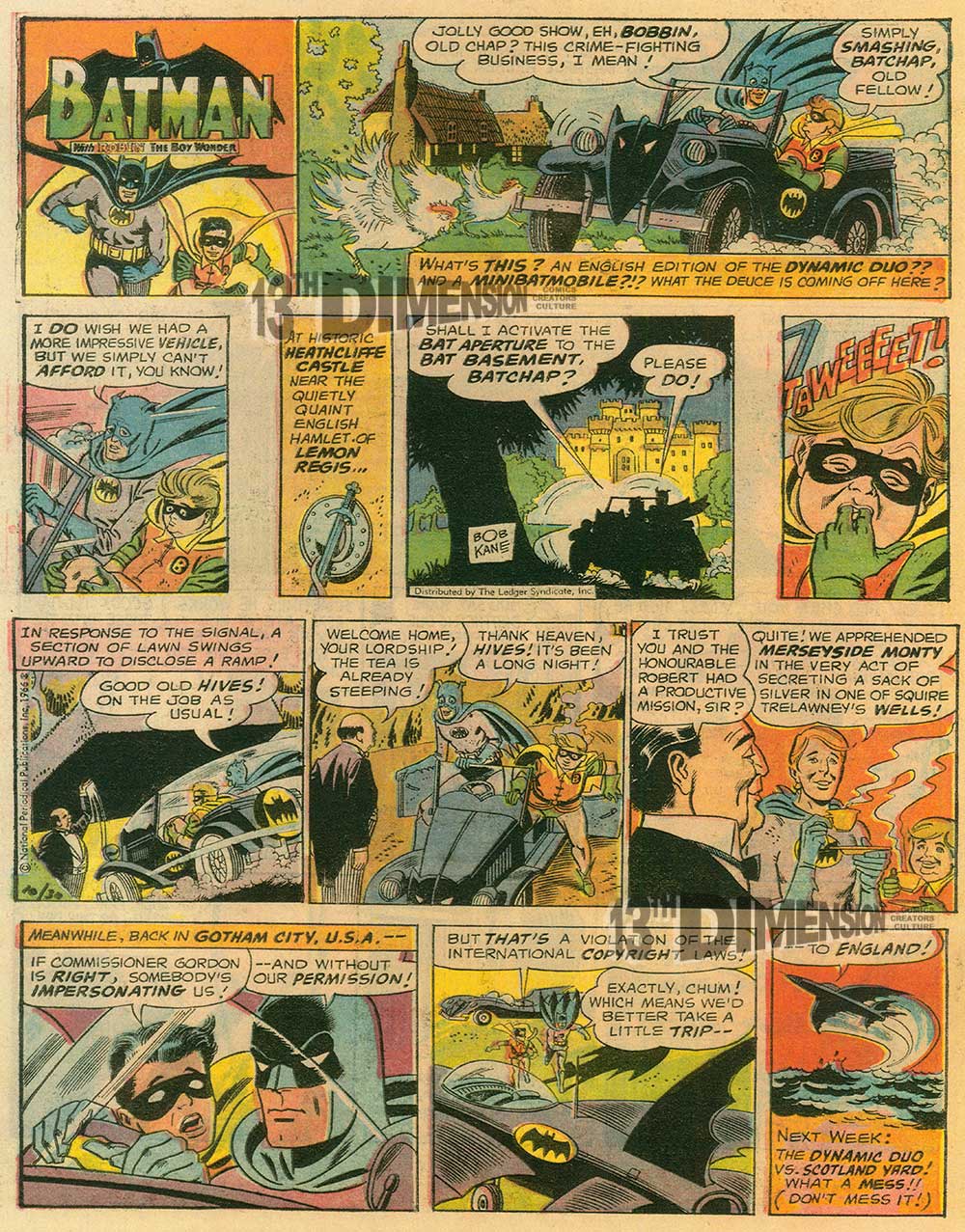 Desris: I still need to send Dean some dailies from my collection which are needed for Vol. 3, and I think there are some Sundays missing the top tier in Vol. 2. Sundays all were originally drawn in a half-page format, but as time went on, papers carrying the strip were tending to publish it in the one-third page format, which used the bottom two tiers. The strip was intentionally written and drawn with this in mind, so the top is important to those of us who prefer completeness, but it does not have critical story elements. … If some things still are missing … hopefully some collectors will come forth with what is needed. With this being a definitive series, I think readers will ultimately find MORE than they expected, rather than missing material!

What input has DC had?

Mullaney: We send each stage of production to DC for approval, and they send back comments or suggested changes. For example, for Pete Poplaski’s fantastic homage covers, DC first approves the pencil rough, then the inked version, and finally the colored and lettering artwork.

By the way, just as Joe started assembling the 1960s strips after the 1940s reprint was published years ago — hoping the series would continue — Pete Poplaski was also looking ahead. Our cover for the first volume is based on a rough Pete did way back then. 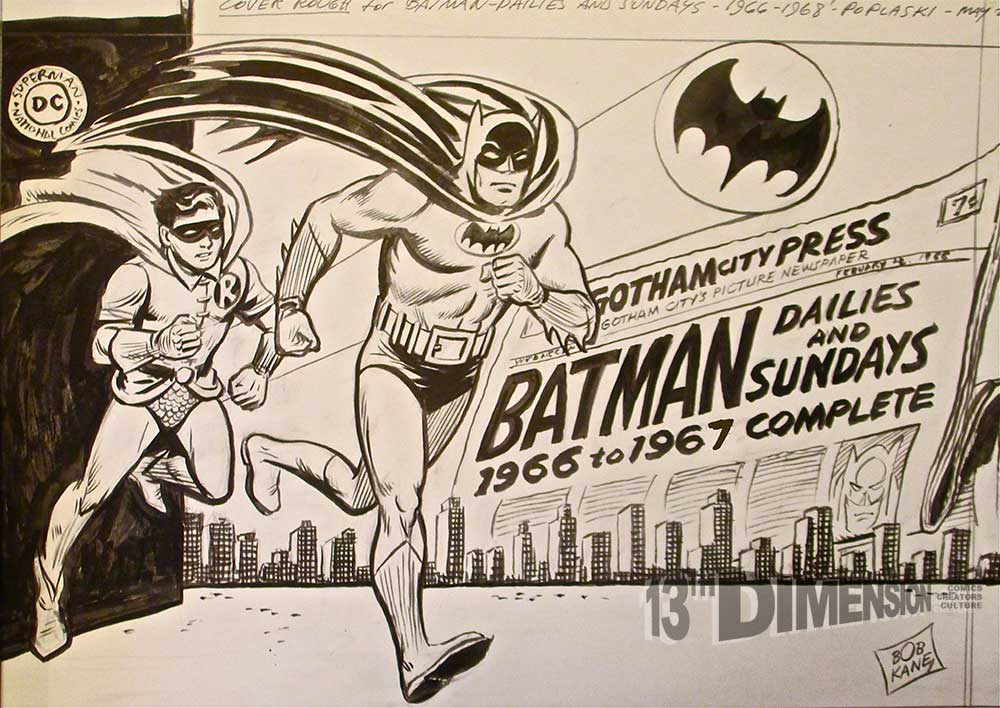 According to Mullaney, here’s how the volumes will break down: 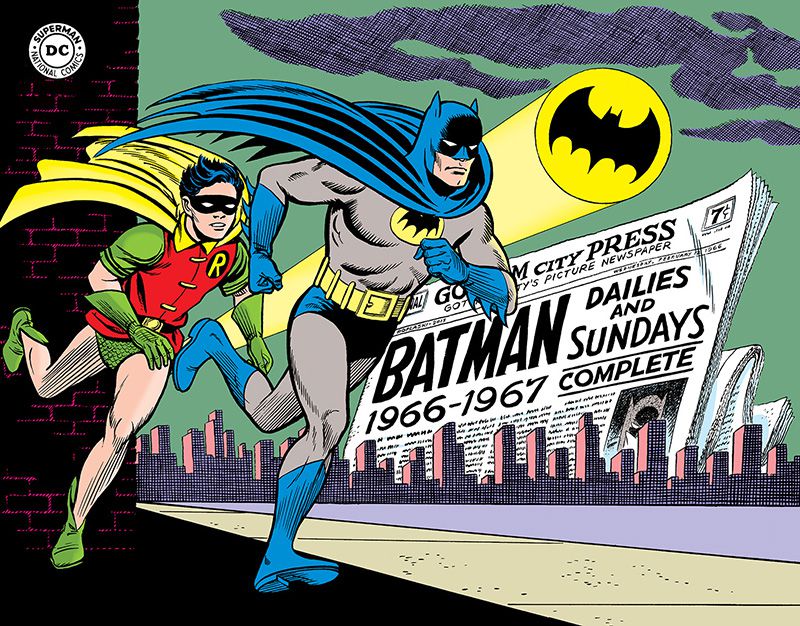