ACTIONVERSE AFTERMATH #3: The Virtue of FRACTURE 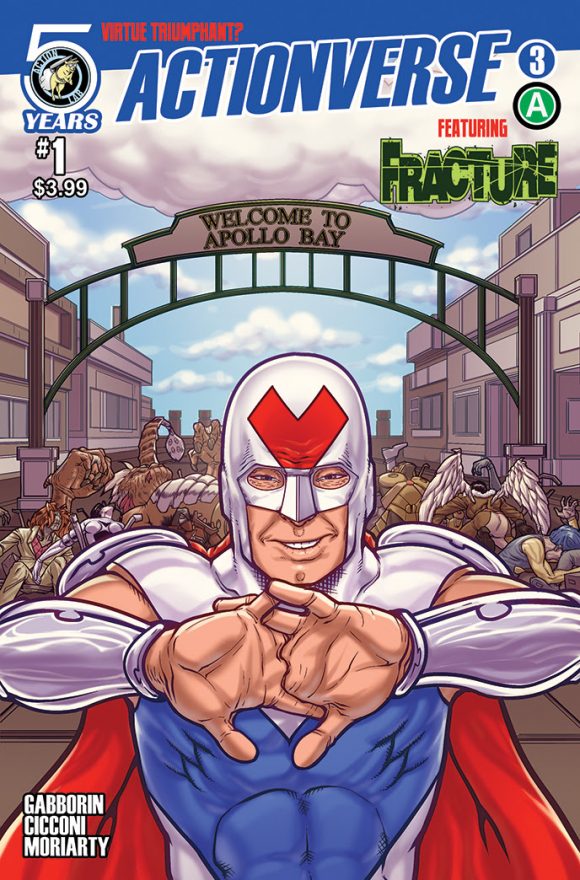 Chad Cicconi: Fracture is about a guy who has multiple personalities, one of which is a superhero and one of which is a supervillain, and neither knows about the other. It is a dark comedy set in a world of superheroes. Volume I was a 3-issue series, and told the story of the main character’s discovery of his two alter egos, and how he dealt with his predicament. It was Action Lab’s first book accepted into the direct market by Diamond in 2011.

So in a very real sense, Fracture was an important step in the birth of Action Lab itself. Volume II, released in 2014, extended the story and revealed that there are more than two characters in the protagonist’s mind, and showed the chaos (both within his head and in the world) as more and more of them surface.

Shawn Gabborin: Chad’s so eloquent. I have nothing to add to that. 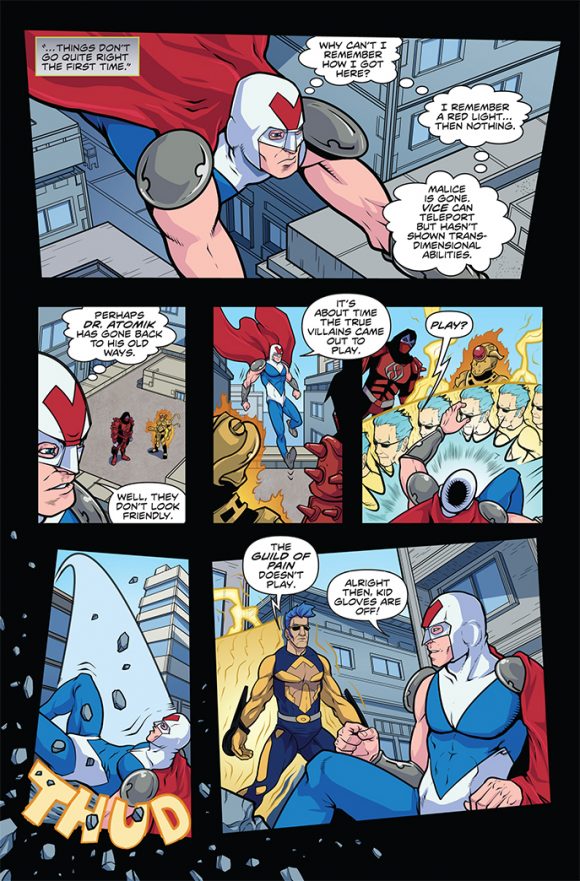 Vito: There is a HUGE spoiler here, especially if readers paid keen attention to Volume II. Without giving anything away, was this something you guys intended when you finished the second volume of Fracture? I know that the inclusion of **SPOILER** was (Action Lab CEO) Bryan Seaton’s idea, but…

Chad: I can’t speak for Shawn, and as the writer he is the one with the master plan for the ongoing story. I can only say I always had a hunch when I was drawing Volume II that we hadn’t seen the last of **SPOILER**.

Shawn: **SPOILER** is the type that there’s always a door to bring back! I can’t say when I intended to unlock that door, though… so this worked out perfectly!

Vito: This is a bit of a softball, but…was it weird coming back to Virtue?

Chad: It was both weird and comfortable. In all honesty, after drawing the first two story arcs, I was ready to do something other than superheroes for a while. But coming back to Fracture for a single issue in the Actionverse line was like coming home, and was a great nostalgic trip back for me. I really enjoyed doing the issue I drew.

Shawn: It was a good weird. My usual genre of choice is horror, so stretching other muscles and stepping back into the supehero world was a lot of fun! I love writing Fracture. There’s a lot of fun characters and personalities to play with, so to get to do another issue was very cool. 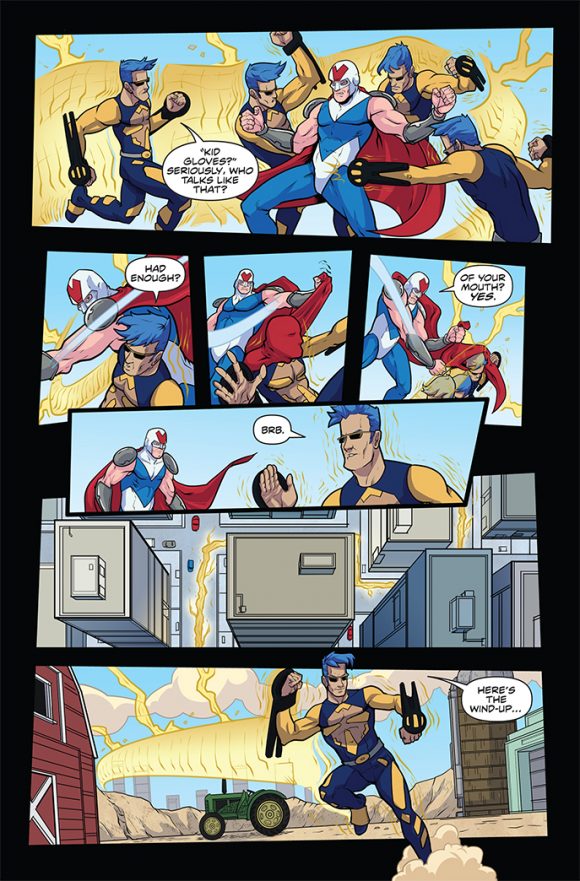 Vito: Something that might have been missed in the first act is…you both, ostensibly, created our villain, too. Your issue of Actionverse has a direct tie to Volume I of Fracture, and we have an extensive origin for Cascade in Issue #3. It’s always tough to let a bunch of guys work on your lead character, but was it tough to let us play with one of your villains, too?

Chad: With the other talented artists working on Actionverse, it is torture for me to look at their work and see them work with characters I designed and we originated in Fracture. It makes me want to work harder and get better as an artist so my insecurity at seeing someone else do my character better than I did doesn’t eat me alive. My only turnabout is that I got to butcher some of their characters in Issue #3. Sweet revenge.

Shawn: When we were talking about the story for Actionverse and we were trying to work out the villain, I believe it was Jamal (Igle) who first suggested pulling this character from Fracture to become Cascade, and it made perfect sense to me! And as much as Kyle is an important part to the Fracture story, he was in a holding pattern until a much later story, so it was a lot easier to let him become a part of this rather than, let’s say, our main villain, Malice. Not that I would’ve said no to that…just that Kyle is more “available” to mold and reform at this stage of his story. 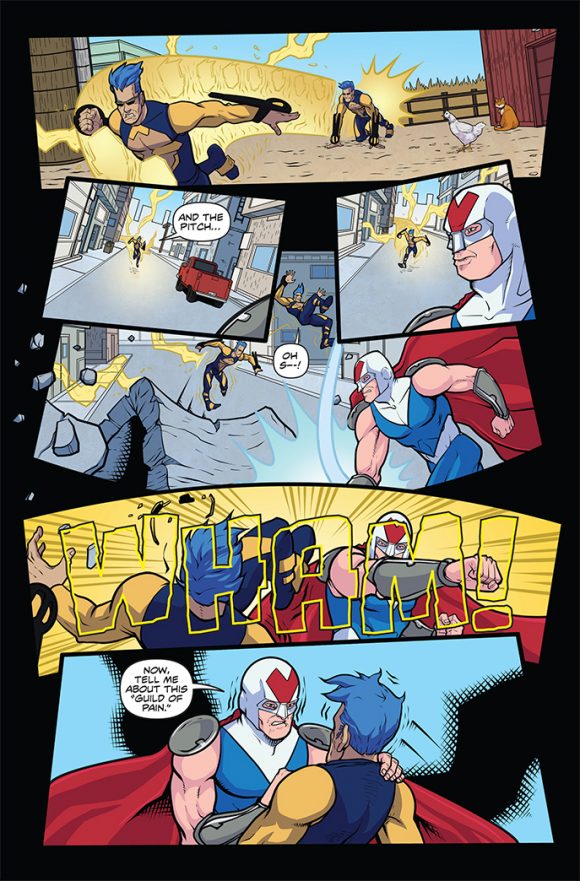 Vito: Virtue, along with Molly Danger and Jake Roth (aka the F1rst Hero), is probably one of the most important characters in the story, and his arc is really important. Again, I don’t think the story exists, in this fashion, without Virtue. Are you both happy with his arc from beginning to end?

Chad: I’ve always thought Virtue’s journey through the first two volumes of Fracture was an extremely interesting and intriguing idea for a story, and the offshoot that we took to link into the Actionverse is just another example of a cool thread that came out of that story. I can’t wait to see how it keeps going.

Shawn: I agree with Chad. It was a logical extension of what we did in the existing Fracture books, and I believe all of the creators involved in the Actionverse have done a great job of continuing what we started. It needs stating that everyone has treated each other’s characters with the utmost respect. It’s been great to see that level of care put into this project by all hands involved.

Vito: You’re both involved in a few new projects. Shawn is killing it (pun intended) on Puppet Master, and Chad, you just announced Blue Hour and The Null Faeries, so I’ll just ask this straight out: Do you guys have any interest in coming back to Fracture?

Chad: I’d love to someday return to Fracture but after finishing up Blue Hour (currently pencilling Issue #5 of that five-issue series), I’ve personally promised myself to finally draw my first comic that I’ve also written. I’ve had the story for The Null Faeries percolating for the better part of five years, and if I don’t draw it now, I probably never will. That’s slated to be a five-issue series, and since I’m not a full-time artist that will take me more than a year. After that, who knows — a return to Fracture would be possible. I’ll never say never.

Shawn: I am very proud of the work Chad and I have done on Fracture, and it’s a world that I would love to explore more. I write with long-term plans in mind…so I do have more stories in my head for Fracture, right up to how I would like to see the series close. Will things line up for us to do more? That’s yet to be seen, but I’d love to do it.